In order to gain an insight in the sensors on the territory of Kazakhstan, we will first look at the sensors of the International Monitoring System (IMS). The IMS is a worldwide network of monitoring stations that detect events that might indicate violations of the 1996 Comprehensive Nuclear-Test-Ban Treaty (CTBT). The CTBT is a multilateral treaty, that bans all nuclear tests, for both civilian and military purposes, in all environments. The International Monitoring System includes seismic, infrasound, radionuclide and hydro-acoustic stations located on the territory of 90 countries around the world, including Kazakhstan. The Kazakhstan monitoring stations network consists of seismic and infrasound stations (figure 1). The data from these stations are acquired and processed at the Kazakhstan National Data Center (KNDC) in Almaty. These stations, on the one hand, participate in the International Monitoring System, and on the other hand, monitor the seismic and infra-acoustic activities on the territory of Kazakhstan. 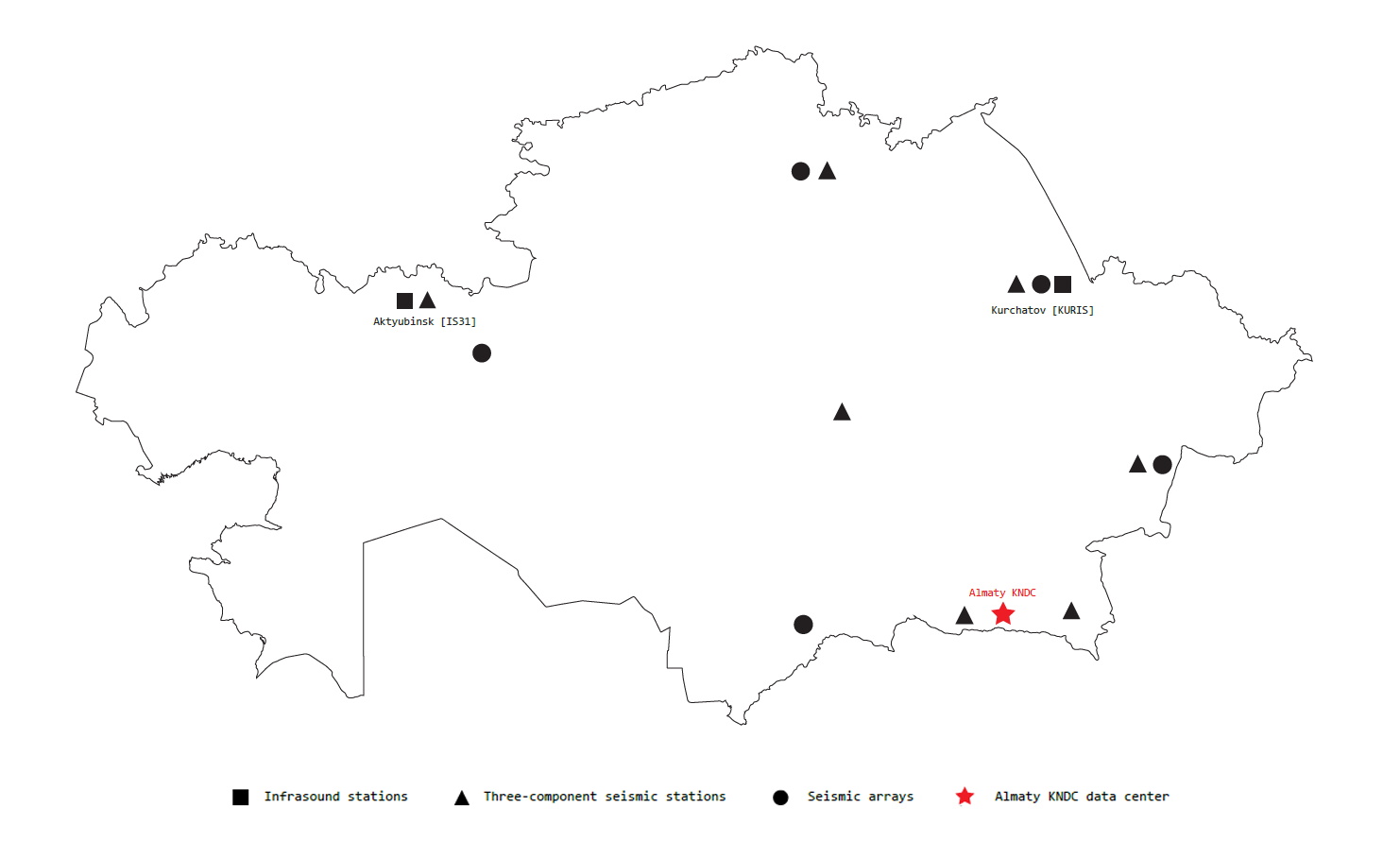 The Kazakh monitoring stations of the IMS record a variety of human, natural, and geological activities through infrasound recording and seismic observation. The seismic stations in Kazakhstan measure seismic activity 24 hours a day through seismometers. These seismometers are installed hundreds of meters deep in the earth’s skin through boreholes and are connected to solid rock. Seismometers reveal seismic activity through the monitoring of seismic waves, which can have several sources such as earthquakes, explosions, drilling and tectonic movement. In his 1991 project ‘The Skin of the Earth’, architect Raoul Bunschoten elaborates on this seismic activity by writing “Slow time. The time of geological movement. Movement of the crust that we call ground. Ground that reaches into the depths of our imagination, deceives us into trusting it as solid, heavy, static – ground to build upon, ground to deposit objects on”[2] 2 - Bunschoten, R., L. The skin of the earth. AA Files, 1992(23). 97–98. This suggests the earth as a dynamic and moving entity, slowly changing over millions of years.

The earth is structured by several layers; a solid thin crust, a liquid asthenosphere, a solid mantle and a liquid core which generates earth’s magnetic fields. Earth’s crust accounts for less than 1% of earth’s volume and ranges from 5-70km in depth. The composition of the crust is built up out of several layers such as igneous rocks like basalt and silicate rocks like granite. These different layers of the composition correspond to different geological times such as the Tertiary (10 – 66 mya) and Cretaceous (66 – 145 mya) periods. [3] 3 - Dastrup, R. The Composition and Structure of Earth. Lumen physical geography. 2020.https://courses.lumenlearning.com/geophysical/chapter/the-composition-and-structure-of-earth/ This suggests the earth as a dynamic and moving entity, slowly changing over millions of years.

According to Bunschoten, “we scratch, incise and articulate earth’s crust in order to place and orient ourselves. We build cities that hug the crust, drawn to, but also alienated from it, as a second skin which mimics the first one with its slowly shifting features and sudden ruptures”.[2] 2 - Bunschoten, R., L. The skin of the earth. AA Files, 1992(23). 97–98.

The crust the city of Almaty is built upon contains a huge active seismic fault which, according to Geologist Christoph Grützner is likely to rupture one day. In its young history, Almaty has been hit by multiple devastating earthquakes in 1887 and 1911.[4] 4 - Grützner, C.Almaty sits on a huge active fault, and here is why we know. 2017.paleoseismicity.org. https://paleoseismicity.org/almaty-sits-on-a-huge-active-fault-and-here-is-why-we-know/ All along the fault, Holocene fault scarps have been found which offset the terrain with heights between 5 and 50m. Some of these fault scarps stem from single large earthquakes while others are so big that they must have been formed by repeated earthquakes millions of years ago. Moreover, relatively young uplift and deformation has been found in the forelands of Almaty, indicating that several seismic sources may be active at the same time.[5] 5 - Grützner, C., Walker, R. T., Abdrakhmatov, K. E., Mukambaev, A., Elliott, A. J., & Elliott, J. R. Active Tectonics Around Almaty and along the Zailisky Alatau Rangefront. Tectonics 36(10), 2017. https://doi.org/10.1002/2017tc004657 These findings reveal the earth as a dynamic and moving entity filled with seismic activity of both today and millions of years ago, made visible through the seismic sensors.

Next to seismic observation stations, the IMS network in Kazakhstan contains infrasound observation stations. Infrasound, often referred to as low-frequency sound, describes sound waves with a frequency below the lower limit of audibility (generally 20 Hz)(figure 2). Infrasound was first discovered after the eruption of the Krakatoa volcano in 1883. Barographs around the world measured small air pressure fluctuations that corresponded to the event. Due to the low frequency of the soundwaves, they hardly experience any attenuation which makes them travel the world multiple times at atmospheric altitudes of over 100km.[6] 6 - Evers, L.KNMI – Infrasound and seismology in the Low Frequency Array LOFAR. KNMI, 2009https://www.knmi.nl/kennis-en-datacentrum/achtergrond/infrasound-and-seismology-in-the-low-frequency-array-lofar Due to the low frequency but high sound pressure characteristics of infrasound, the vibrations can be felt in the body and the sound gets a physical dimension. Due to this physical dimension, the soundwaves territorialize an area and they create acoustic territories.[7] 7 - Ganchrow, R.On Long-Wave Synthesis In The geologic imagination. Sonic Acts Press, 2015. 180-198.

Infrasound waves are being caused by a wide variety of sources. Natural sources of infrasound include earthquakes, avalanches, solar storms and meteors. Human sources of infrasound include quarry explosions, oil flares, rocket launches and nuclear tests (figure 3). Sonologist Raviv Ganchrow terms this ‘the bandwith of the Anthropocene’.[7] 7 - Ganchrow, R.On Long-Wave Synthesis In The geologic imagination. Sonic Acts Press, 2015. 180-198. The Anthropocene is a proposed epoch of geological time in which human activity started to have a large scale impact on earth’s geology and ecosystems. The start date of the Anthropocene is often disputed. A growing group of scientists argue that the Anthropocene should follow up the Holocene (11,700 years ago – present) and start in the year 1945 with the detonation of the first atomic bomb and its peak in radionuclide fallout.[8] 8 - Rafferty, J. P. Anthropocene Epoch | Definition & Evidence. Encyclopedia, 2020. Due to infrasound waves traveling the earth multiple times, they can be monitored thousands of kilometers away from their original sources. Infrasound reveals human activity as an anthropogenic geological force capable of interacting with the scale of topography and even the earth.[7] 7 - Ganchrow, R.On Long-Wave Synthesis In The geologic imagination. Sonic Acts Press, 2015. 180-198. 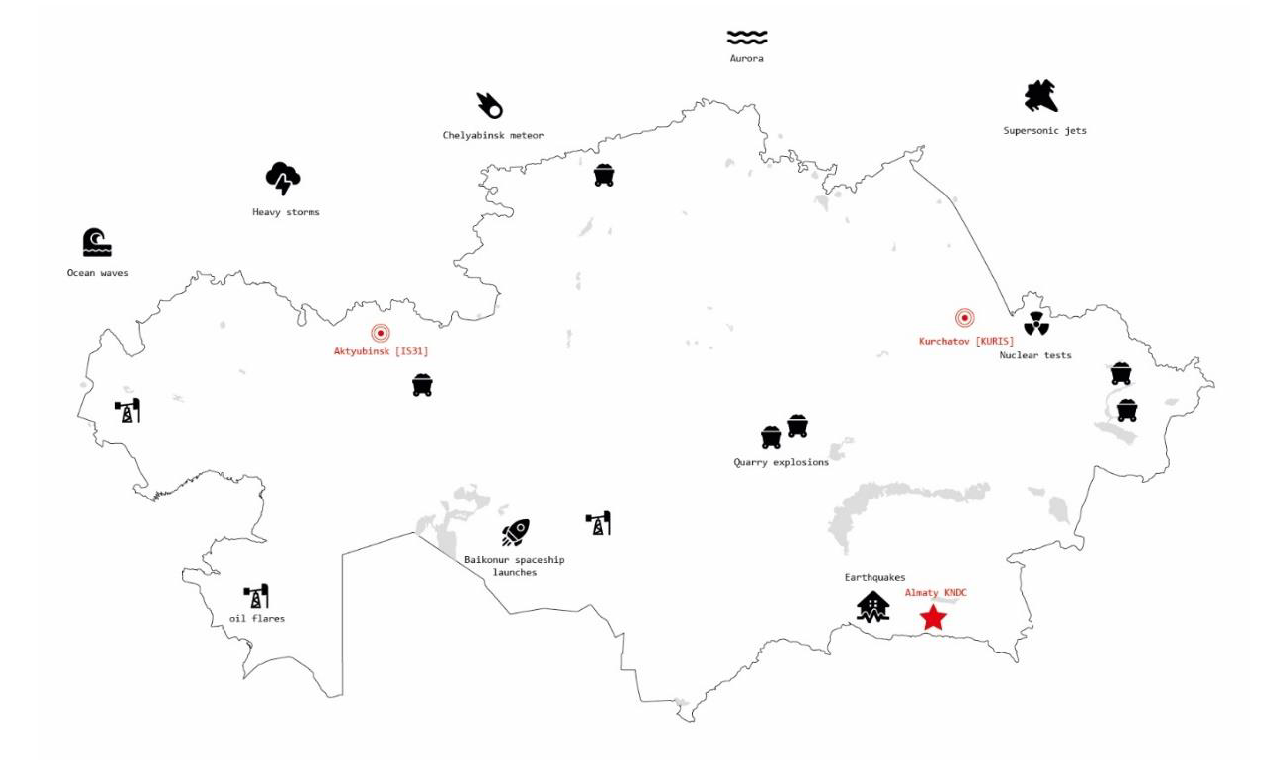