Home > Design > The Institute Through Time

THE INSTITUTE THROUGH TIME

Over time, the building would develop and be altered by different designers whilst working within the framework defined in the overall masterplan. As an overview of the building, these two drawings (fig. 12-13) suggest what the entire line could look like at any one stage in time. It tries to differentiate between inside and outside where the spaces do not entirely fit together seamlessly.

Along the line there is a water park that channels water into storage collectors. The outdoor landscape would be constructed of a material such as copper that would naturally patina over time. Whilst further along the line there could also be an enclosed space such as a blood bank and a data centre that interprets memory in a contemporary sense. Towards the end of the building, there is an indication of a space that is de-constructed with only a few walls left standing, leaving traces of the concrete footings in the ground as a memory of what was constructed there before.

Whilst the masterplan gives an indication of time and scale across the whole building, the notion of time within the space itself also needed to be explored. The etchings of Giovanni Battista Piranesi and his technique of capturing atmosphere and the qualities of time and movement formed a profound reference in the bid to find an alternative interpretation to the render, and whether a line could create an atmosphere or an emotion. 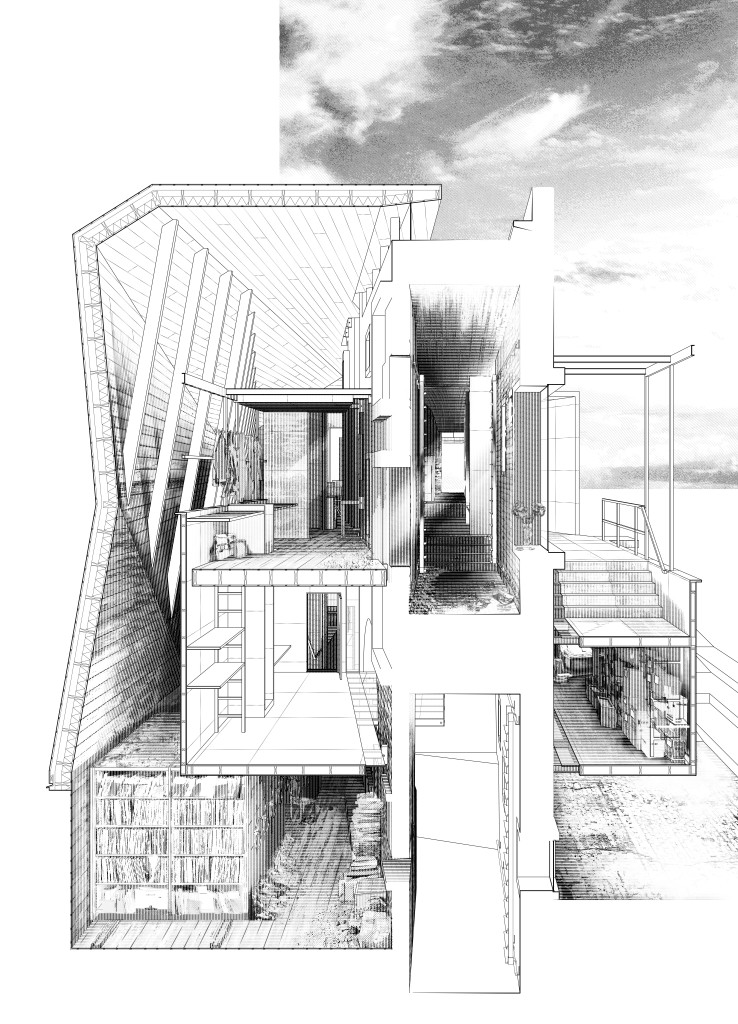 In the section itself only parts of the drawing have started to be filled in as an accumulation of objects, traces and time (fig. 14). Within the archive shelves books start to overflow into the walkway. Dust accumulates along the shelves. The timber begins to wear as people walk over the same space again and again. The self-storage starts to fill with boxes of forgotten items. And in the memorial space poppies occupy the window as a symbol of remembrance, and a photograph from the time of Ceausescu and the destruction of the landscape is left on the ground (fig. 15).