The meaningful negative of trans-gression

In the context of Degtjarsk, one might ask why it is not possible to simply recover the territory after the ‘ugly industry’ has abandoned it. It is my intention here to stay as much as possible distant from those intentions. For the sake of that same performative mentality, to repurpose failure into something productive is a continuation of that same logic, a logic which would wish to “hurry to reintegrate the waste and the refusal too much, again, commercially, to the productive”.[11] 11 - Emery, N. Distruzione e Progetto. Milano: Marinotti, 2010.

Instead, the nihilism produced by that failure can be turned into a double negative, a “Revolutionary nihilism” which is “nihilism-against-immanent nihilism of commodity”.[12] 12 - Emery, N. Distruzione e Progetto. Milano: Marinotti, 2010. Accepting finitude and our limitations are the trans-gressive movements towards the territory that allows us to speak relationally of it. It allows us to value the meaning of being imperfect and always relative, present in a situation.

To better understand this concept, one might look at Matta Clark’s work. Here the negative element of progressive ideas of architecture which exposes the fallacy of performative and functional space is highly relevant. In the same way, the rush to give ‘performance’ to decadence is seen as an exasperation of the logic that produced that decadence. Matta Clark’s holes in buildings soon to be torn down, expose the role of the negative that is produced in such a decadence as the signifier of the architectural object itself. They make of subtraction, the agent and consequence of an ideological discrepancy, as they expose negativity as being “political since it signals the vulnerability and contingency of every phenomenon that appears fully positive and replete. Negativity draws attention both to the instability of every form and to the contingency of all boundaries”.[15] 15 - Krivý, M. “Industrial architecture and negativity: the aesthetics of architecture in the works of Gordon Matta-Clark, Robert Smithson and Bernd and Hilla Becher.”The Journal of Architecture. 15:6 (2010): 827-852.

The negative of ‘optimal function’, shows how the performative side of space is doomed to expose itself, soon or later, in its fallacy, and in that fallacy to reveal something else: the nature of the architectural organism as a fragmented body, an ensemble that is signified by difference as their agglomerate. As in the case of the Degtjarsk’s territory, no element is independent of the others and the only meaningful part is the one missing from the one to the other, i.e., the relation, the space in between the grass field and the chimney.

If then Degtjarsk is the territorialization of a void, it is in that fallacy that progress already exposed its vulnerability and boundaries. In the operation of establishing boundaries, the trans-gressive idea of failure becomes clear. In Foucault’s words “transgression is an action which involves the limit.” It “shines light over boundaries”, actively generating when overpassing them” and “showing the limitedness of the limit”.[16] 16 - Simons, J.Foucault & the Political.London: Routledge, 2016. By making explicit the finitude of any social project, even the ones which were shouting for absoluteness, transgression reveals their limitation, by moving through their negative and establishing their reverse. It becomes now evident that how the sooner we integrate limitation, unpredictability, and the possibility of failure into our projects, the sooner we will liberate ourselves from vicious cycles of control and destruction.

A specification on the nature of the term trans-gression is now needed. Although it surely indicates a particular kind of social behavior that challenges authority, we shall retrieve its etymological meaning as one that overcomes something, or that ‘cuts’ it perpendicularly. The latter significance is fully understood if trans-gression is juxtaposed to pro-gression, as this essay intends to propose the former as an alternative to the latter. If a pro-gression is a linear vertical and ascensional movement, a trans-gression of this movement is its ‘perpendicular’, is a movement which is aimed at broadening its field of determination, by inserting it in a relative dimension, and bringing down the otherwise absolute trajectory onto a relativized and multilinear dimension. That is why the fall of one has its cause and its consequence in the other.

The broadening of this mono-dimensional perspective is, furthermore, of a specific kind of quality and refers to a particular action which is the one of differentiation. By ‘crossing over’ something else, trans-gression enacts a qualitative jump towards the ‘making intentional’ of a discontinuity. The ‘path’ of a transgressive movement is, therefore, made of the deviant elements with respect to a normative trajectory. This action of differentiating or deviating gives transgressive movement negative properties concerning the differentiated space in which it moves. In that, we find its value as a “nonpositive affirmation”.[17] 17 - Simons, J.Foucault & the Political.London: Routledge, 2016.Therefore, if to affirm something is to determine it, this means to give meaning to it, to actively create and establish an entity for what it is. This agency makes transgression a trajectory along which meaning is formed. A trajectory that is structured on the acknowledgment of difference, or that lives of the constant withdrawal of determination of an entity’s being.

These properties of trans-gression resonate in spatial terms with a practice of ‘taking care’ of the unpredicted, similar to the Baudelairian behavior we explored earlier. They operate an overturning of spatial qualities that move from the positive, explicit, and objectively defined, to the negative, ambiguous, and relational. They establish intentionality based on the acknowledgment that we and the products we make are almost perfect but never as such. An alternative tendency towards the acceptance of imperfection and the intentional experience of it.

Progress as an intention behind modern thinking resulted in practices of planning, control, and pro-jection of intentions. By tracing relations between these modes of action, and dominance of technique over the intentional base of modernity, so far, we have established that an objectivization of existence for the sake of aiming at the ‘purification’ and ‘liberation’ of the finite being, is what informs these actions. 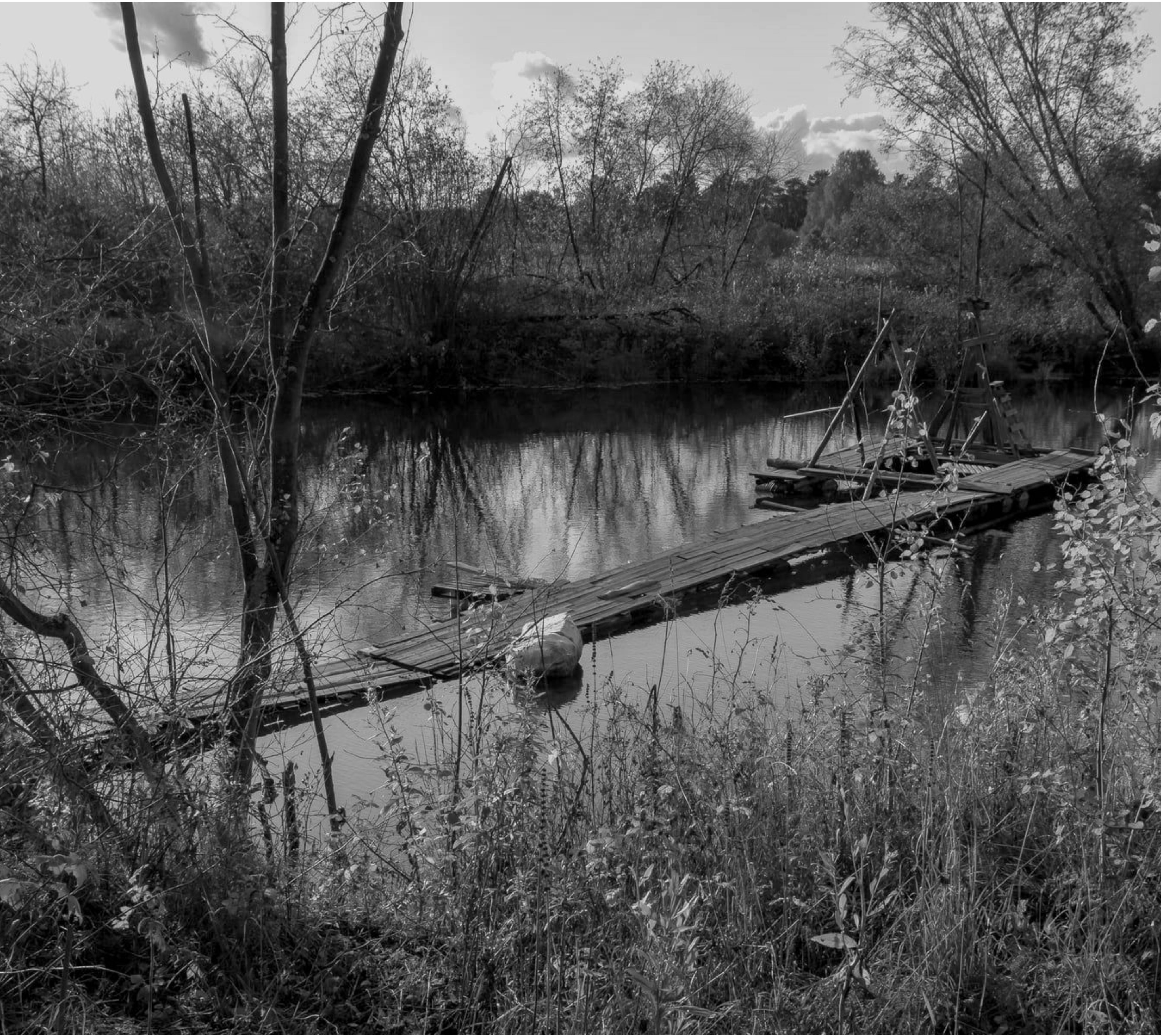 Improvised fishing dock in a former mining pit in Degtjarsk made of scrap material.

However, when finitude is accepted as a value and not as a plague, transgression is the intention that informs practices of improvisation, caretaking, and intro-jection as modes that always also represent a subjectification of the ones involved in their operative translation. Moreover, because of its differential nature and its emergence from a shortage, improvisation as a trans-gressive operation is essentially local and dependent on the specificity and contingency of the situation in which one is operating.

In the practice of improvising spatial production, failure becomes structurally implemented. It is the premise of it. Because of this condition, the principles of predictability and certainty, achieved through technical control, lose significance.

In this operation of “revival of the dead”, we find a different form of poiesis that uses technology as an abductive (contingent trial and error process) normative support rather than a dominant aimless precision. A restored infra-structural level of technical knowledge, which holds the cumulative succession of performed attempts in such a practice, in a metabolization of failure, becomes a fundamental part of creation.

The improvisational outcome of transgression finally suits the specificity of a place which has a particular inclination towards it: “improvisation is perhaps easier in those liminal spaces of the Global East to which Ekaterinburg belongs and which are epistemologically located somewhere between, or beyond, North and South”.[20] 20 - Müller, M., and E. Trubina. “Improvising urban spaces, inhabiting the inbetween.” Environment and Planning D: Society and Space, 38:4 (2010): 664–681. This in-betweenness is the opportunity, according to Muller and Trubina, to make use of a structural ambiguity that makes it possible for trans-gressive intentionality to become normative.

This would mean a constant regeneration of norm and counter-norm actively forming the space in between them and creating “different modes of carving out a living between dominant structures and creative destruction”.[21] 21 - Müller, M., and E. Trubina. “Improvising urban spaces, inhabiting the inbetween.” Environment and Planning D: Society and Space, 38:4 (2010): 664–681. That is the participation between the structural and preliminary, and the negative of it: the encouraged chance of failure of that structure. Failing, therefore, becomes an act of creation. Failing something, instead of doing something is what establishes that entity in its being, delimitates its borders by transgressing them.

The technogenic condition of Degtjarsk eventually overturns the very conception of the space that produced it. It brings about an inherently relational condition which makes of difference the source of its meaning, and of uncertainty the purpose of its stability.