In 1666, directly after the The Great Fire of London, a map was drawn that depicts the City of London as a blank void surrounded by neighbourhoods still intact. The map shows only former street lines and fragments of buildings. In this introduction, this map is interpreted as a poetic and formal depiction of the destructed state of the City and suggests that the ‘negative’ image of the city becomes visible as openness and possibility, a feature which would normally only become readable in a textual description. Next, an entry into the city is proposed by implementing a heterogeneous approach, which mixes, amongst others, literary, visual and statistical sources, resulting in a fragmentary, synthetic and abstract image of the real London. In conclusion, the observation and textual analysis of the East London Railway Line is provided, which offers a third way of encountering the city and its fragmentary nature. 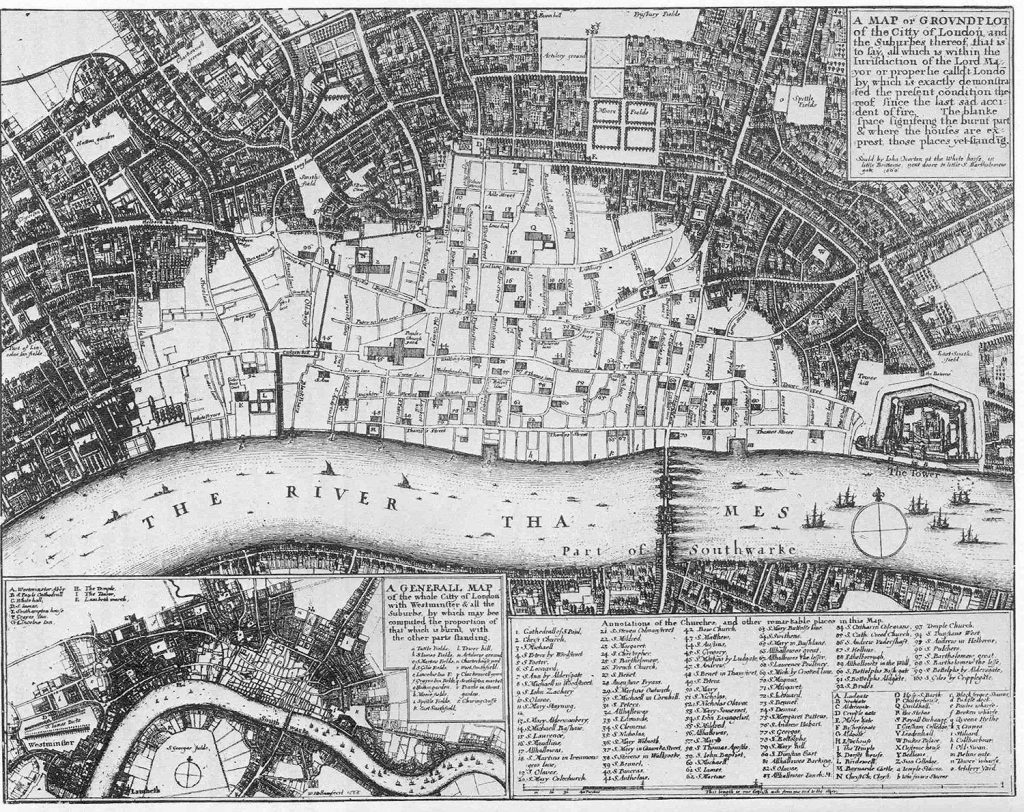 WENCESLAUS HOLLAR’S MAP OF LONDON AFTER THE GREAT FIRE OF 1666
The map depicts the extent of the damage to the city centre caused by the Great Fire. The void, created by the devastating event, is presented as a collection of traces and memories of the former streets, squares, public and religious buildings listed in the map legend. In this representation, the images and memories of the lost city are revived in the spaces situated between writing and drawing, in the imprecise gap between the visible and the notated, between meanings and their typographical representation on the map, and between reality and myth.

Found between the pages of an old book: a drawing or, more specifically, a map representing the city of London in 1666. The map describes the extent of the damage to London’s inner city after the Great Fire of September 1666, which destroyed the central district located within the former Roman fortifications. The drawing clearly shows the brickwork and stone buildings left standing after the fire, traces of the complex and probably unhealthy street system, and the ring of remaining neighbourhoods and suburbs stretching around the main void created by the fire. A number of representational levels can be found in the map: firstly, a journalistic intention to describe and report on the fire in terms of places burned down and surviving buildings (which is also extensively addressed in the legend); secondly, a topographic and cartographic intention to provide a precise description of the urban destruction, including how the structure of the city was deprived of several central neighbourhoods, which buildings survived the destruction and, most importantly, where in the city these remains were located. But even beyond these possible readings and the beauty of the hand-drawn representation, a testimony to the artistic skill of its author, perhaps the most important interpretative key to this drawing is a poetic intention, probably a more intrinsic, formal one than was consciously pursued by the cartographer, one that goes beyond the physical presence of the damage or the location of surviving buildings, or indeed any other technical objective: the intention to represent an absence, something missing, vanished, a loss within a centuries-old city structure.

The map immediately reminded me of the first time I saw the pictures of Rotterdam taken after the bombing in the spring of 1940. The image of a few surviving buildings standing in a field of destruction had considerable influence on my reflections, but even more striking was the desolation of the spaces and the streets between the piles of rubble which, in their obscene formlessness, substituted the former houses, shops, factories, commercial buildings, churches, ateliers, etc. The absence produced by the bombing, the tension between this formless void and the surrounding city with its still recognisable form, a void surrounded by neighbourhoods where nothing seemed to have changed, where life appeared to continue in the streets, shaping spaces and memories through the flow of events, the void’s presence within the familiar context of everyday life, the sudden disappearance of the very core of the city, the moment when certain spaces froze in their last possible composition, now only perceivable in pictures and memories – all these elements greatly influenced the following considerations about the London map.

The assumption that the importance of the poetic intention extends beyond a representation of the destructive consequences of the fire, plus the great interest inspired by the formal repercussions of the fire on the city structure, altered my approach towards the map. Every other accepted reading and interpretation of the map, every aspect of the representation it provides and fragment of the story it narrates, was suddenly transformed into something more interesting than the physical evidence of an historical event. Everything had to confront and somehow relate back to the void. The absence constituted by the blank spaces in between the surviving buildings represented the centrality of the entire map and its real meaning. The extreme event of the fire was able to sublimate and abstract the form of the city into a limited set of adventitious and arbitrary elements. This process of abstraction and erasure of a constituted form returned the city to a state of possibility and openness. Not only a physical openness, given that the structure of the city had indeed been broken up, but also an openness in terms of any formal, theoretical or interpretative point of view. This does not mean that the void simply became a tabula rasa ready for reconstruction, but that it presented the possibility of choice. Within the empty space the set of elements and traces (fortuitously chosen by the event and the cartographer) constituted, in fact, the formal memory of the vanished metropolis. This memory reveals in all its intensity a potential imaginative ‘filling’ of the blank space: an urban composition that might complete the missing centre of the city, one that not only refers to the city of the past, but also, and most importantly, to an infinite number of new formal substitutions.

The violent rupture of the city thus discloses its real form and future alternatives. Reality is revealed by means of an involuntary excavation that unveils its true formal character beyond and in opposition to the pre-existing structure and recognised historical form of the city. The remaining buildings and those vague traces of a former street system assumed a totally different value in this context. Their relationships and connections, invisible before, were laid bare. This act of exposure not only tells us about the structure of the old city, but also opens the possibility of discovering new interpretations for those relationships, ones that ultimately become more important than the physical aspects themselves.

The void becomes the main interpretative entry point to both the map and the city of London. The empty space becomes the stage for a new set of potential relationships and spatial compositions. The annihilation of the city invites a new, written and descriptive definition, with text, legend and list of destroyed places as the only means for representing, in a non-cartographical way, what was left in an almost unrecognisable state on the field of destruction. The threads of a new architectural discourse on the city after its disappearance therefore seem to be stretched between understanding the void in terms of possibility and absence: its capacity to arouse memories and, simultaneously, its openness towards infinite formal interpretations; the presence of traces of a former spatial definition and the absence of rules and constraining forms. And, moreover, the impossibility of achieving a physical representation of the void except in an indirect way: namely, by approaching the absence as a ‘negative presence’ of the leftover structure of the city or as a textual description.