Premise and the formal analysis platform

Before getting at the design and architectural scale in Degtjarsk, a preliminary and parallel experiment was conducted in Delft. This action of prototyping involved the re-use of materials and the creation of a formal analysis platform. A formal analysis platform is a very simple infrastructural support meant to facilitate a basic spatial gesture: elevating someone from the ground high enough as to provide a zenithal viewpoint of a surface area down below. By doing that one can capture pictures, and hence measures, of objects in a designated area, without distortion or perspective angles. The scope of such an object is to create a low-functional structure aimed at supporting a self-sustaining activity of garbage and waste instrumentalization.

This prototype was the empirical experiment of the implication of an alternative methodology that uses abduction (trial and error) as a metastable generative process and is meant to shine light over the practical outcome of manipulating and building with leftovers. This feature makes it a ‘precise’ improvisation or ‘rigorous’ anarchy. An oxymoronic yet vital process of creation from the constant and perpetual crisis of whose end is indefinite and only processual. This amounted to the attempt of re-defining the steps that, as designers, we consider necessary to link material supply and formal and compositional outcome of spatial objects. The methodology underlying the production of a physical object from conceptual stages of projection of intentions. For this reason, the project and this prototype are mainly concerned with infrastructural and preliminary moments: the epistemological support of creation.

At its base, the project relies on catastrophic premises, availability of waste over resources, and tries to adapt its methodology to a switch in these two terms’ meanings. From that, the low-functional nature of the project is necessary because of the unlikely possibility that high-tech and refined solutions could be applied in such scenarios.

This pilot experiment for the project represents an architecture that is politically disillusioned with a positive faith in progress and growth and the possibility of a future that never arrives. Rather it is already retreating, preparing for collateral damage, looking to rigorously organize a world of derelicts and leftovers, and to experiment and embrace its aesthetic.

Digital sketch of the spatial requirements of a formal analysis platform. 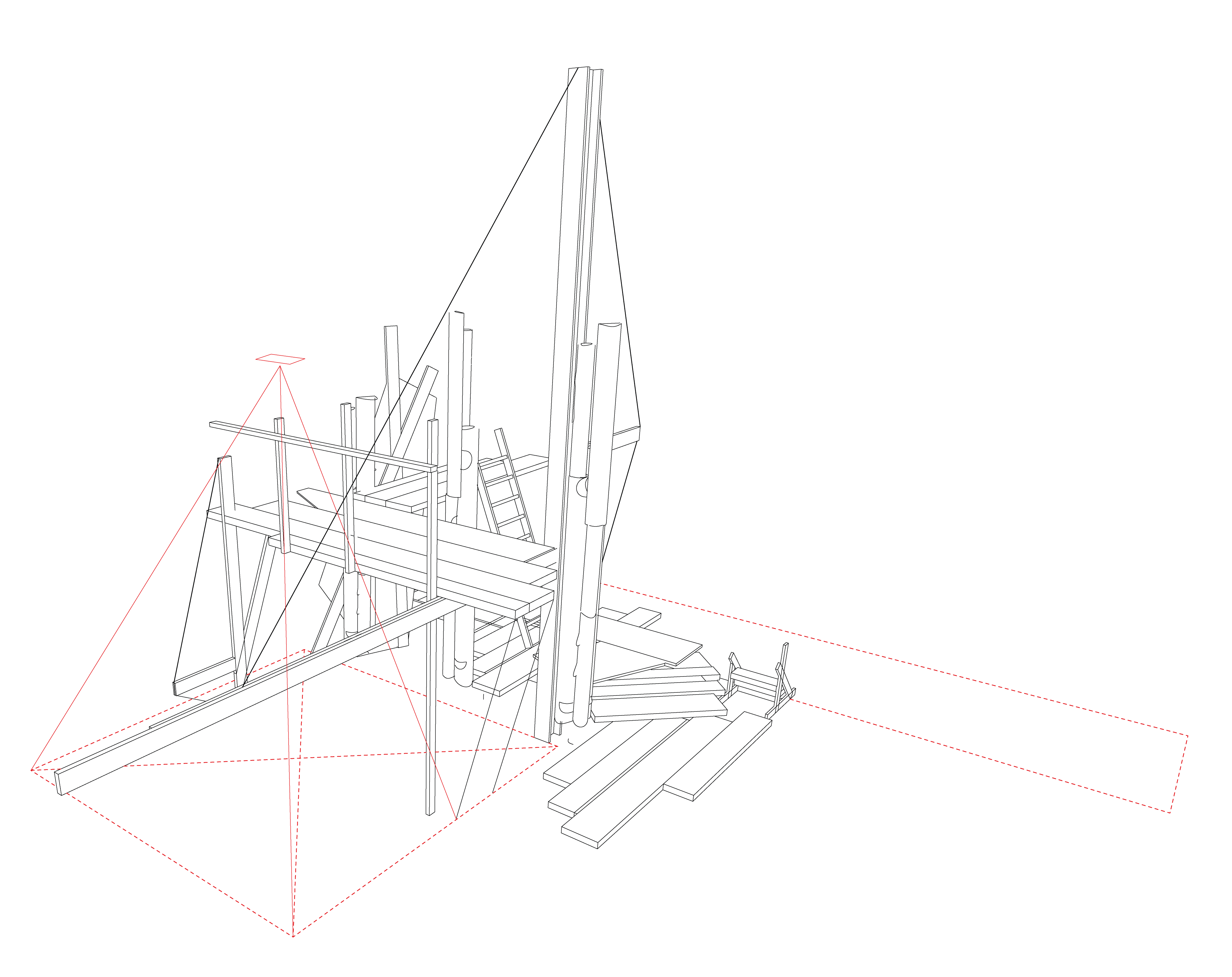 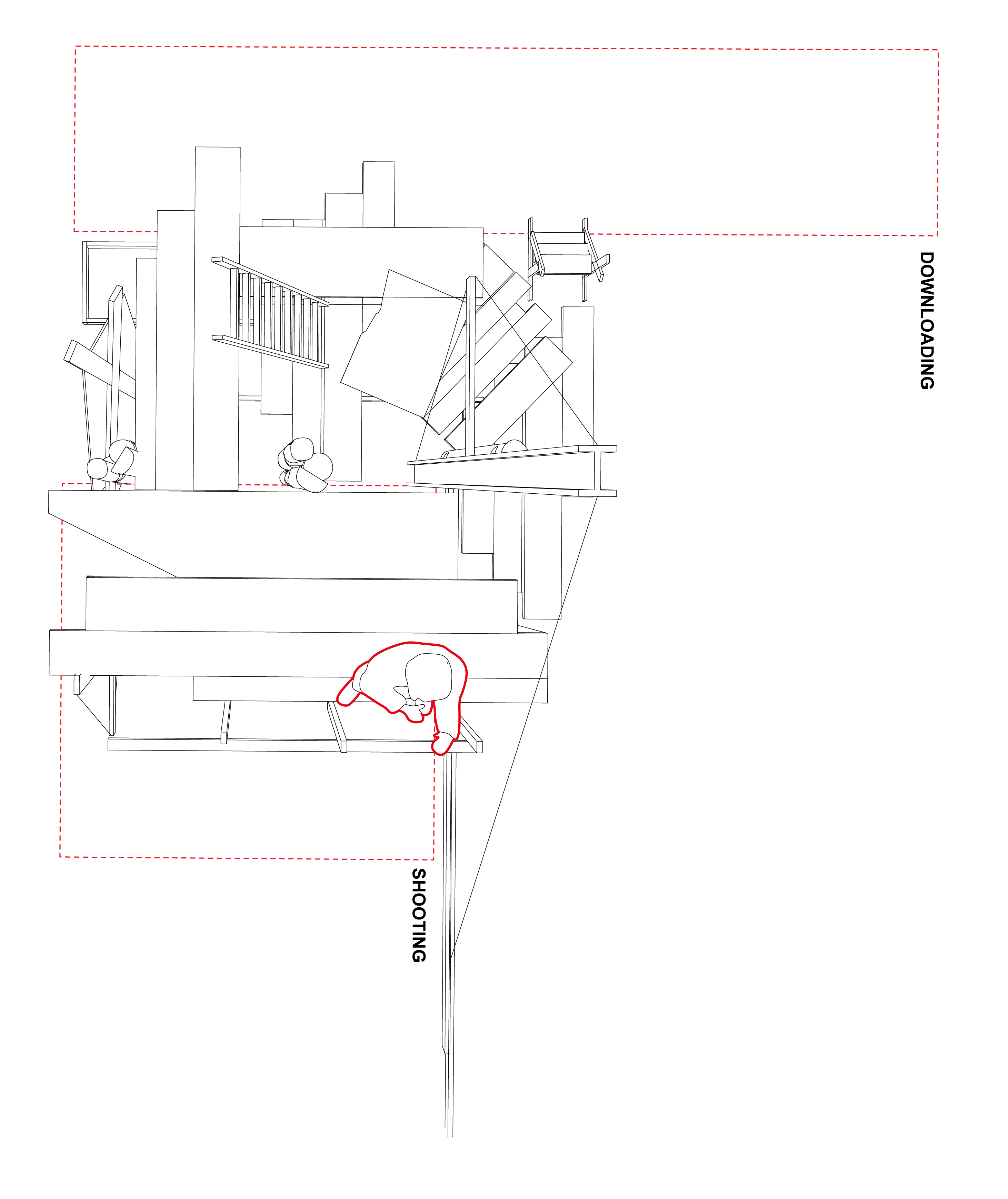 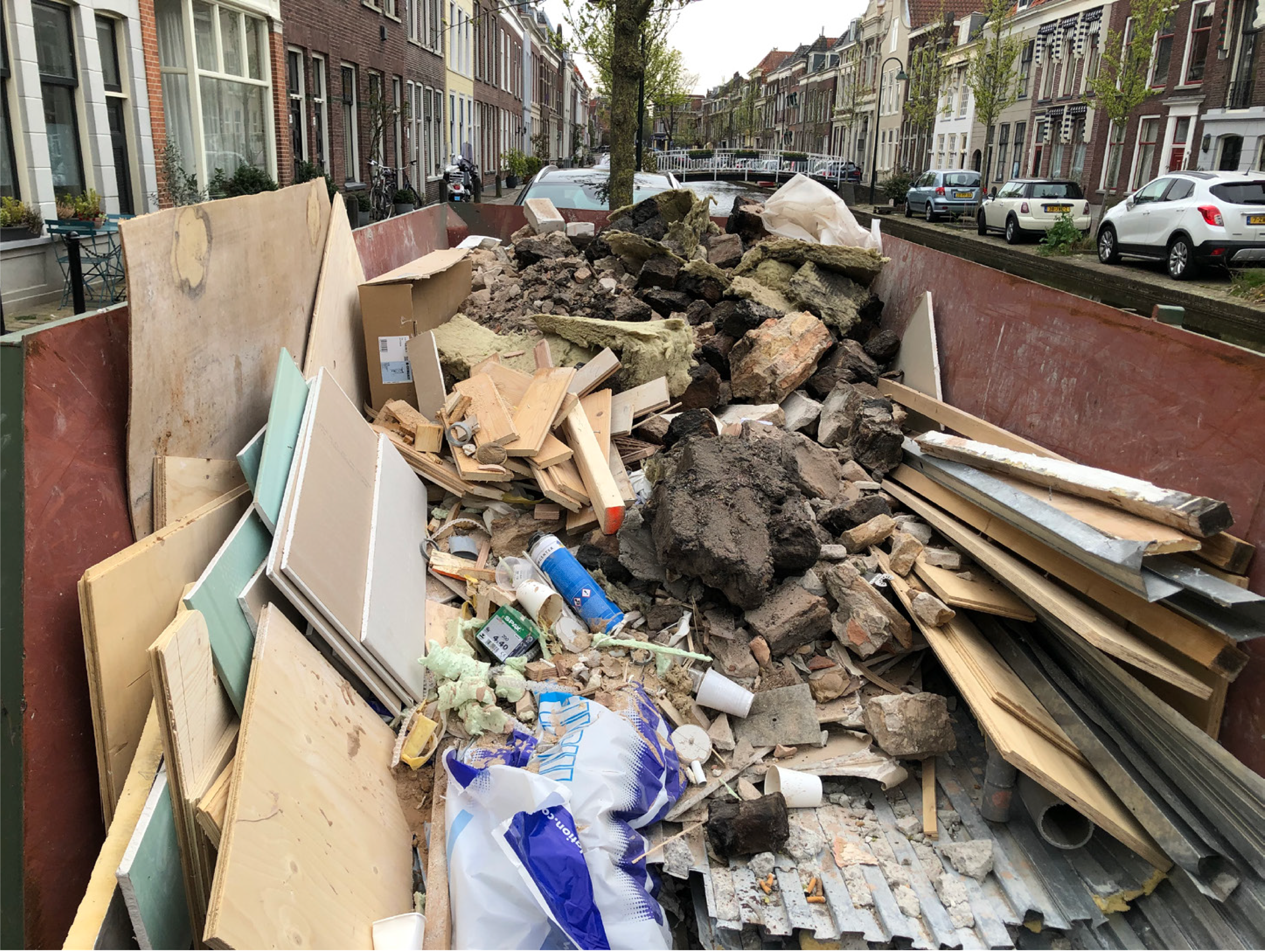 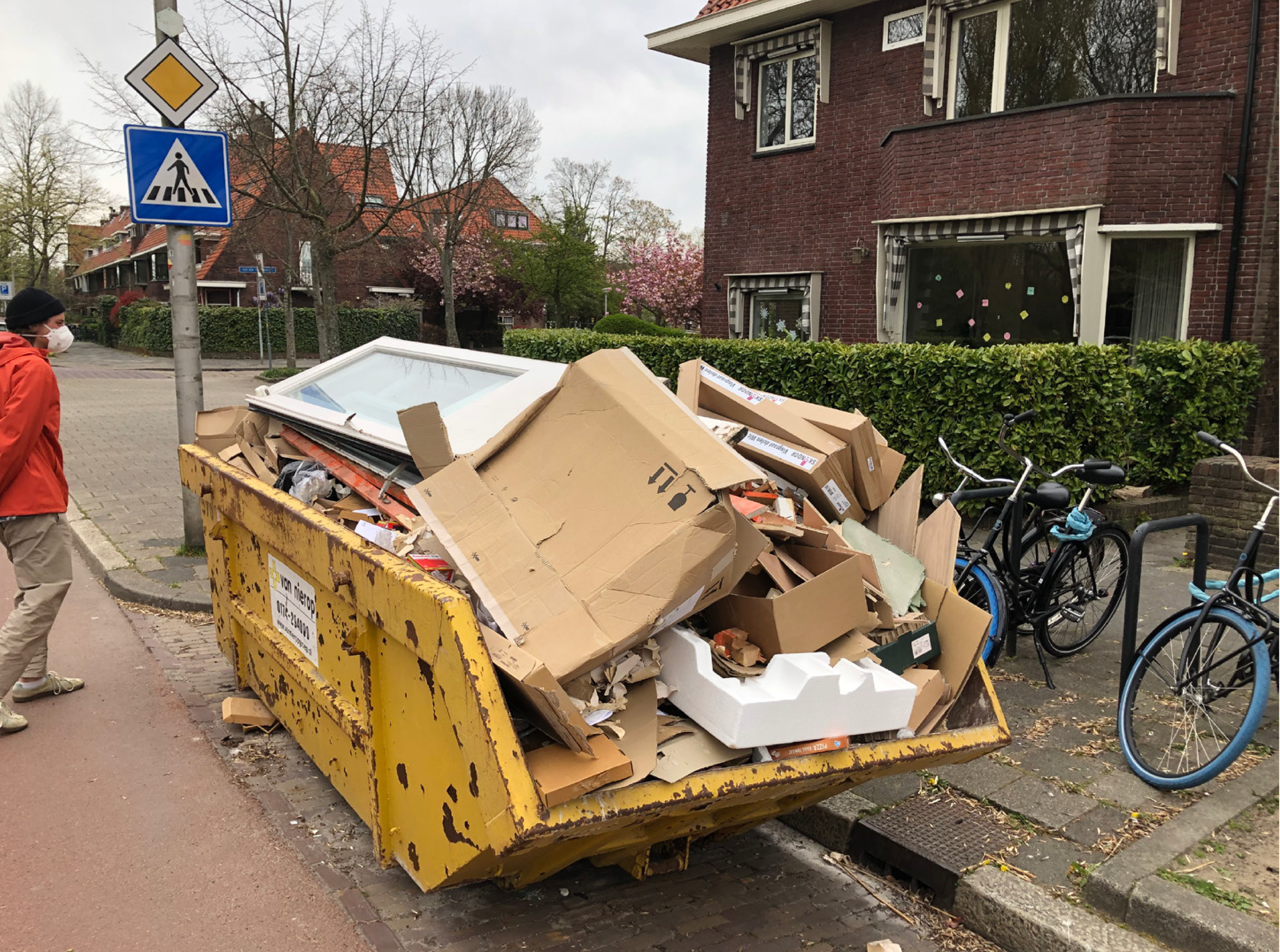 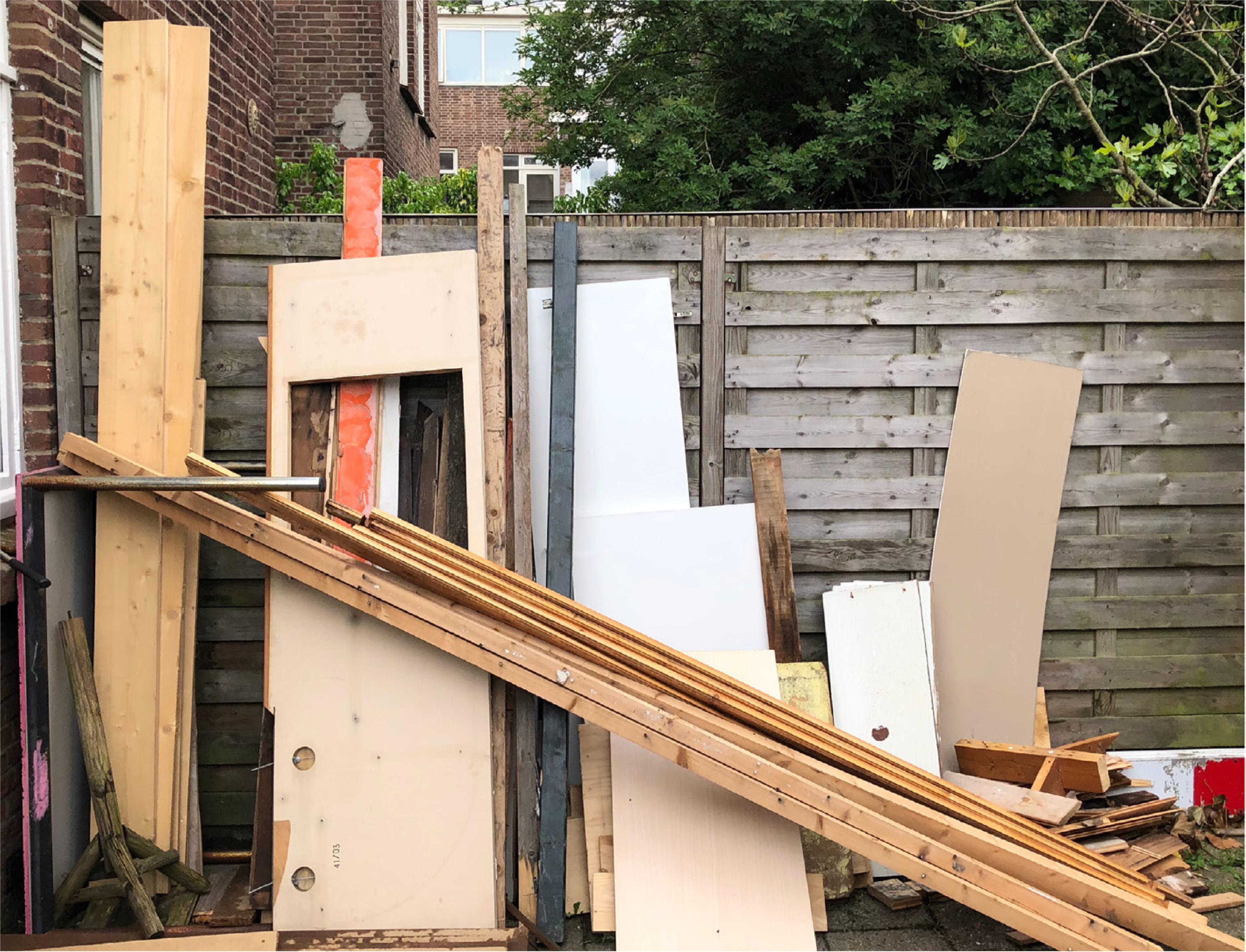 The idea is to tackle the problem of waste accumulation by negating the very concept of waste-because-non-functional and to engage imaginatively with the potential it still holds. The first step to do is therefore to get to know the specific quality of what we can deal with, to analyze it.

The change in perspective here is dictated by a reverse design logic that creates what it can with a fixed and available material stock, rather than projecting an idea and afterward arranging/producing the materials needed to get it built. This implies a setting in which waste material is far more available and affordable than newly produced materials. A radicalization of future scenarios of resource depletion and energetic scarcity.

The platform is built following the logic of over-compensating the structural weakness and imprecision of waste materials by using a large number of components- quantity over quality. In addition to that, the whole ensemble is careless in respect to the achievement of a ‘pure’ and ‘elegant’ composition of materials, rather than simply materializing the spatial components that allow for the user to reach the required height. This gives in turn a shattered and asymmetric geometry as the aesthetic product of building with waste material.

The intention was here to experiment with a spatial product and a counter-aesthetic by imposing a constructive methodology as the source of spatial intervention and observing/deriving its plastic consequences. 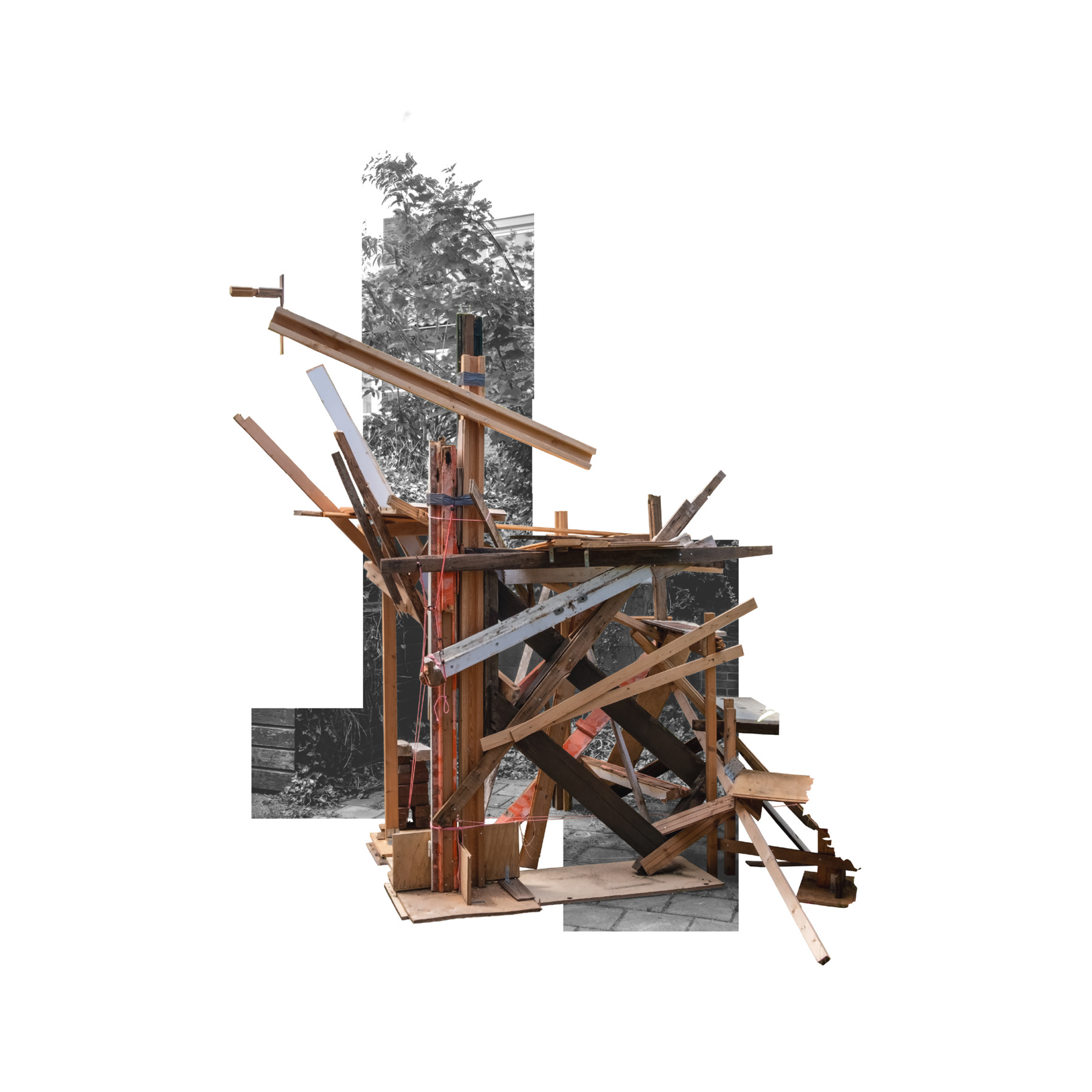 Prototype of a formal analysis platform. 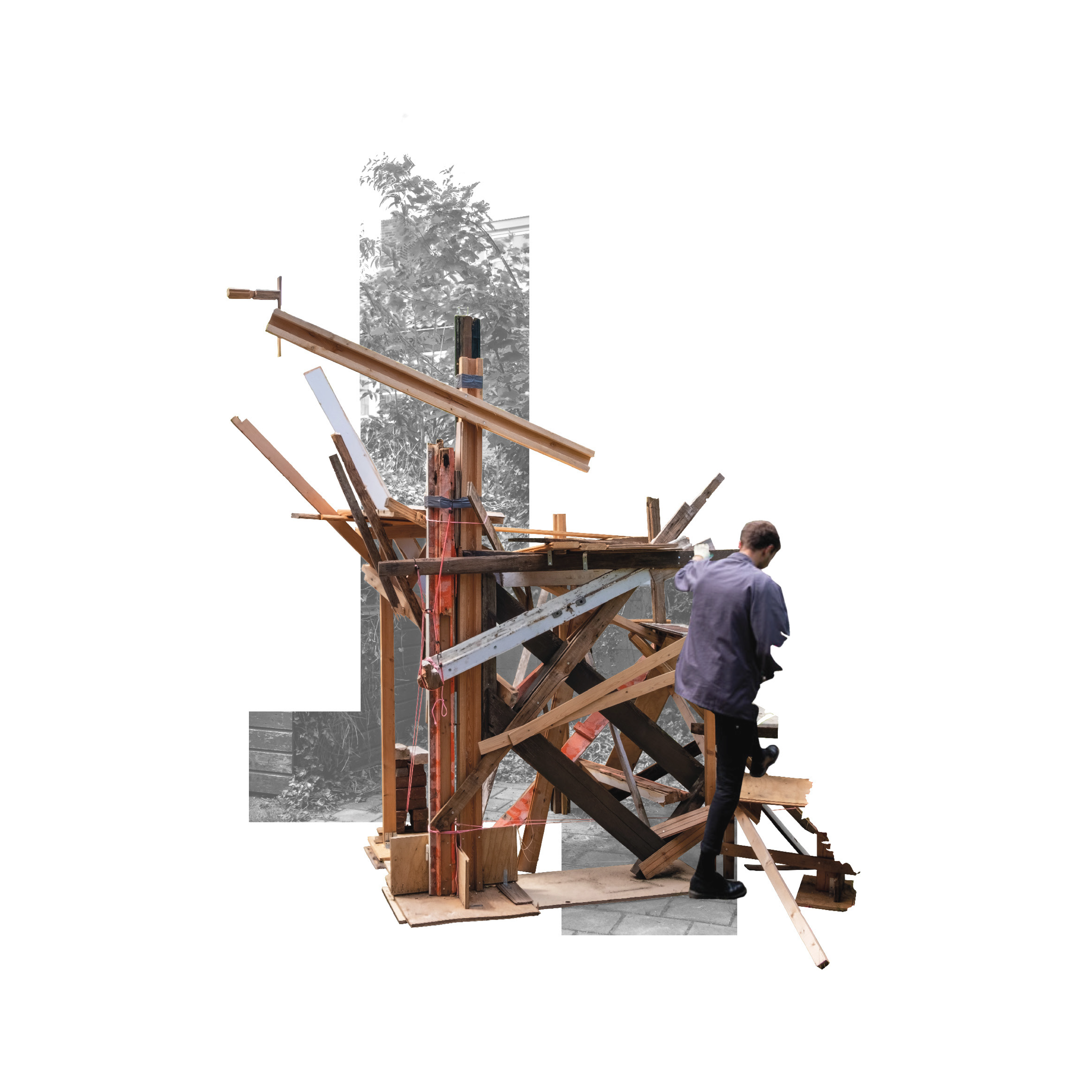 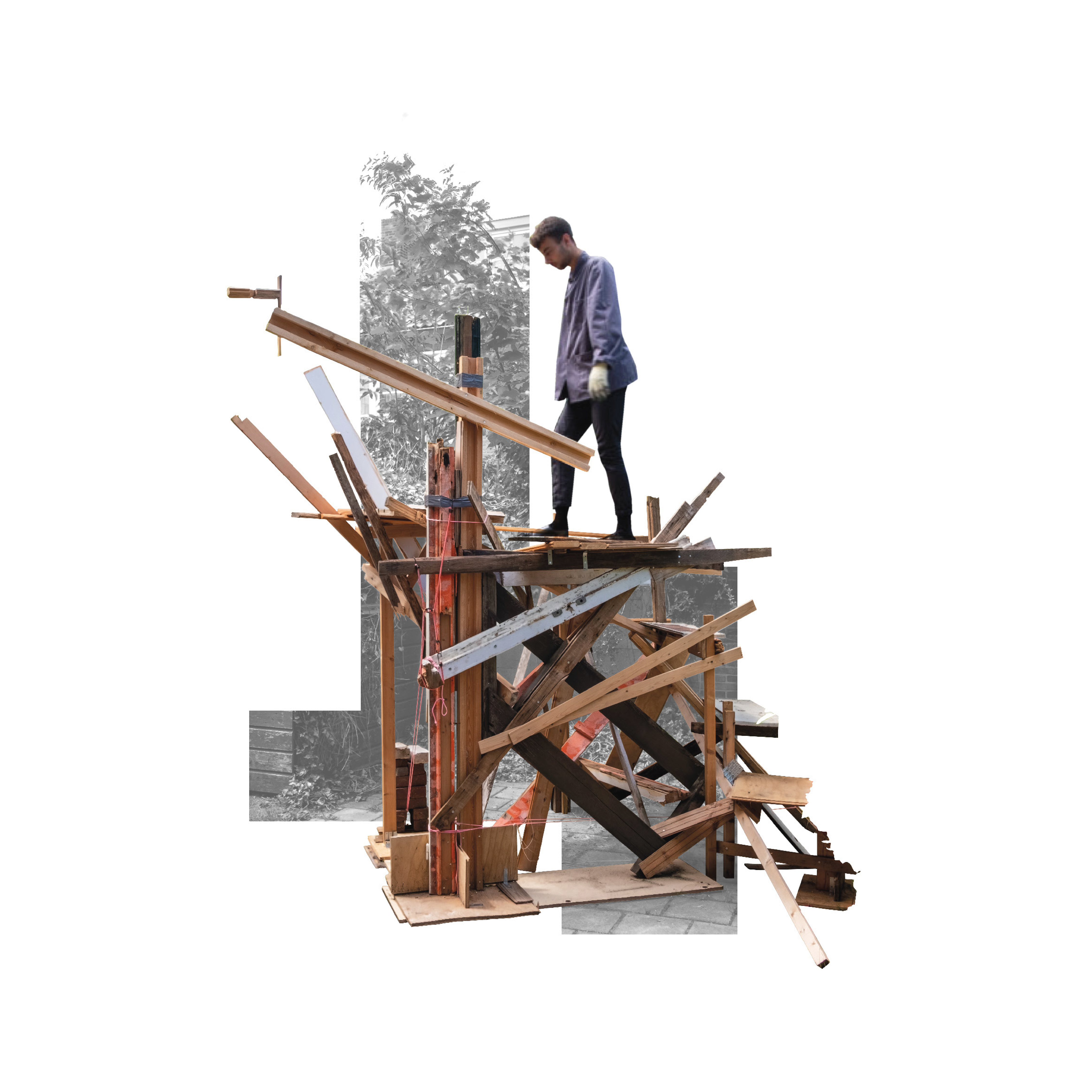 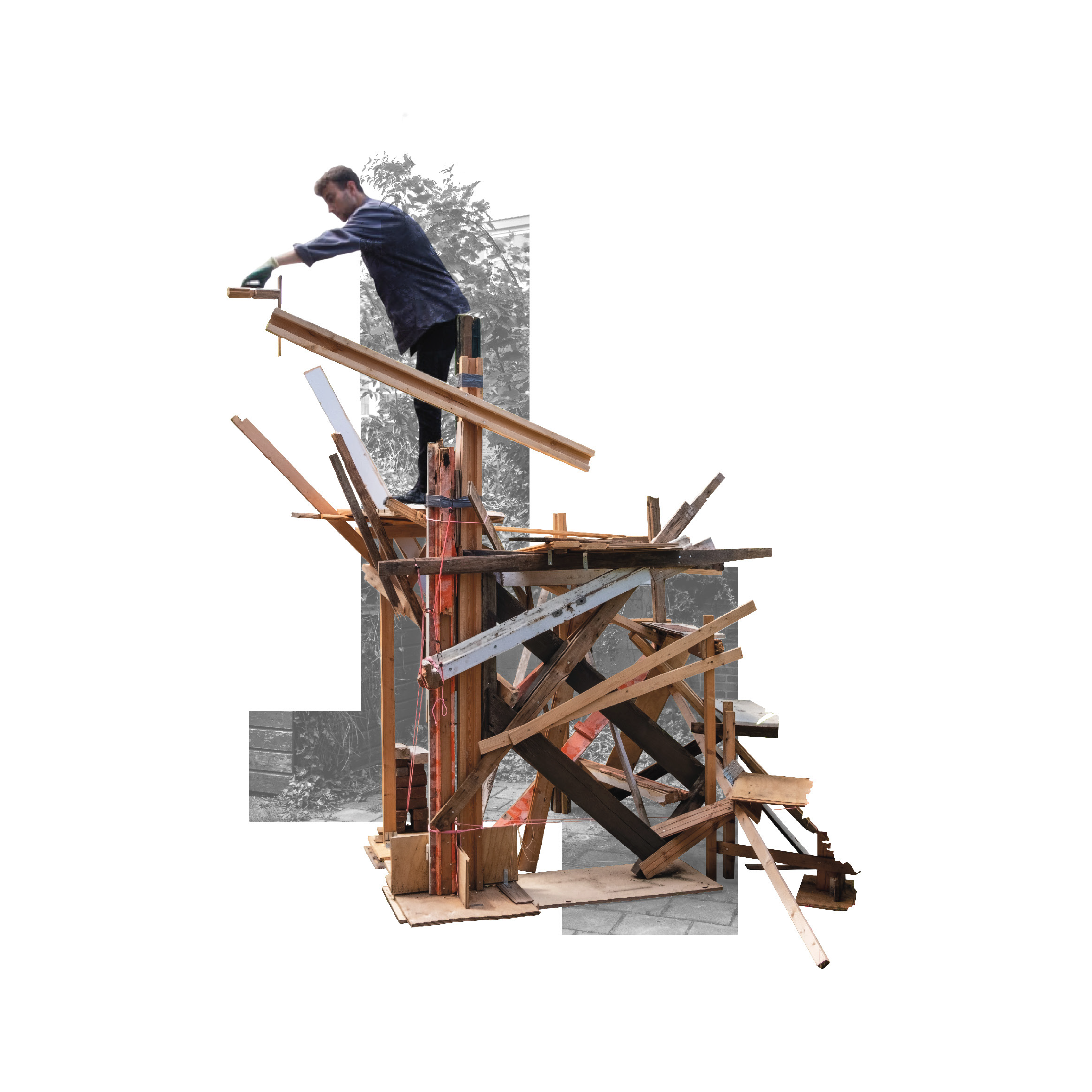 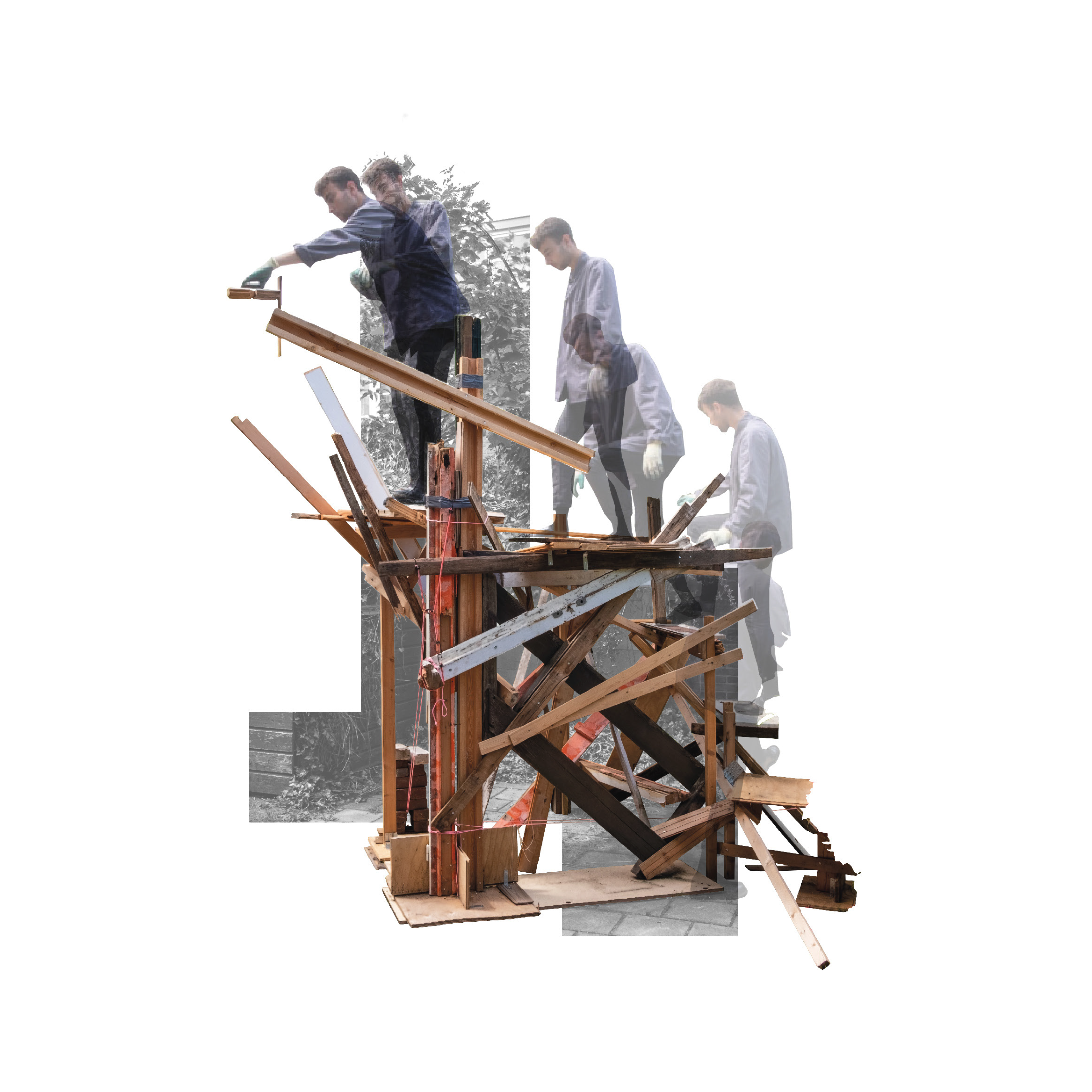 Prototype of a formal analysis platform.
Overlaying steps stress the platform as the materialization of a spatial gesture.

This creates a tautological cycle in which the more material the platform scans, the bigger it can get, igniting a regenerative process of deconstruction and construction. This property is analogous to the wider architectural project set in Russia where the program is intended at auto referentially focusing on recycling and being self-reliant from a material supply point of view.

The four steps lead to a point elevated from the ground of around two meters, where a photographic device (a phone a camera, or a scanning device) can be placed to shoot pictures of materials laying on the ground. The small piece of wood at the top rotates to adjust and level the alignment to the ground. 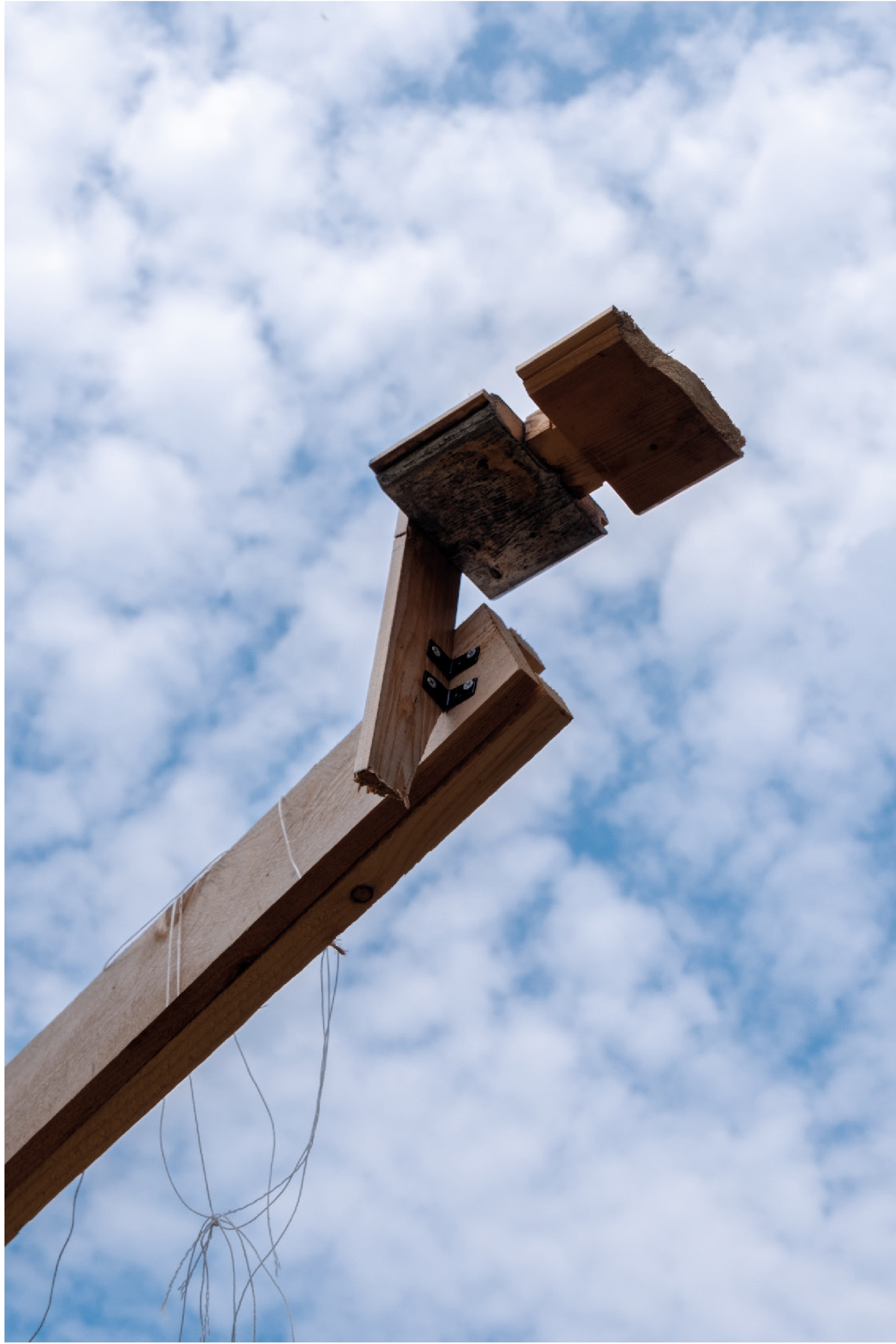 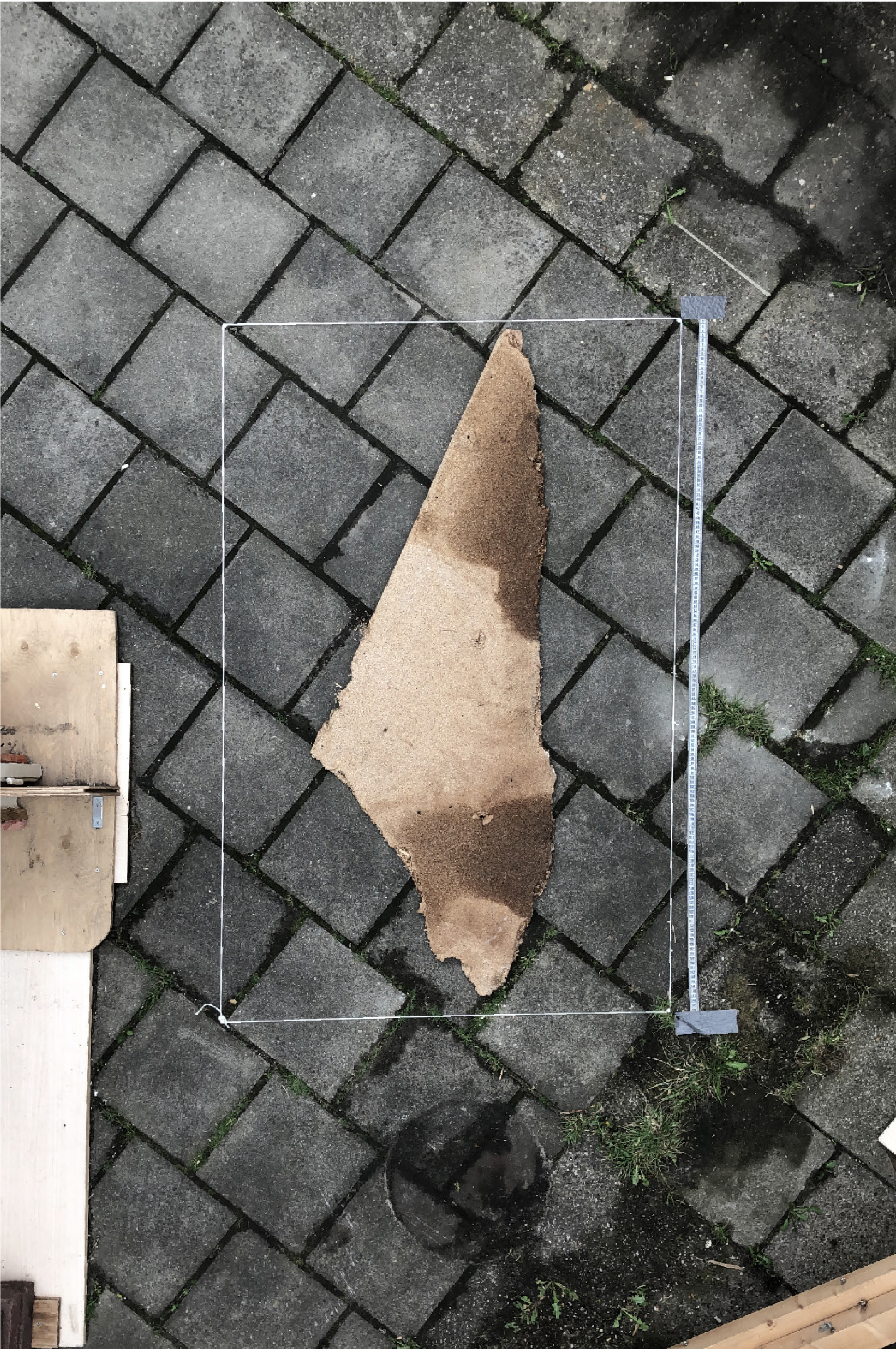 The formal analysis finally proceeds by placing materials in a designated area. The more materials are recycled the higher the platform can virtually go and the larger the materials scanned can be. To have a scaled reference to the pieces, a ruler or a scaled object should be placed in proximity of the designated area and the framework of the photographic/scanning device. 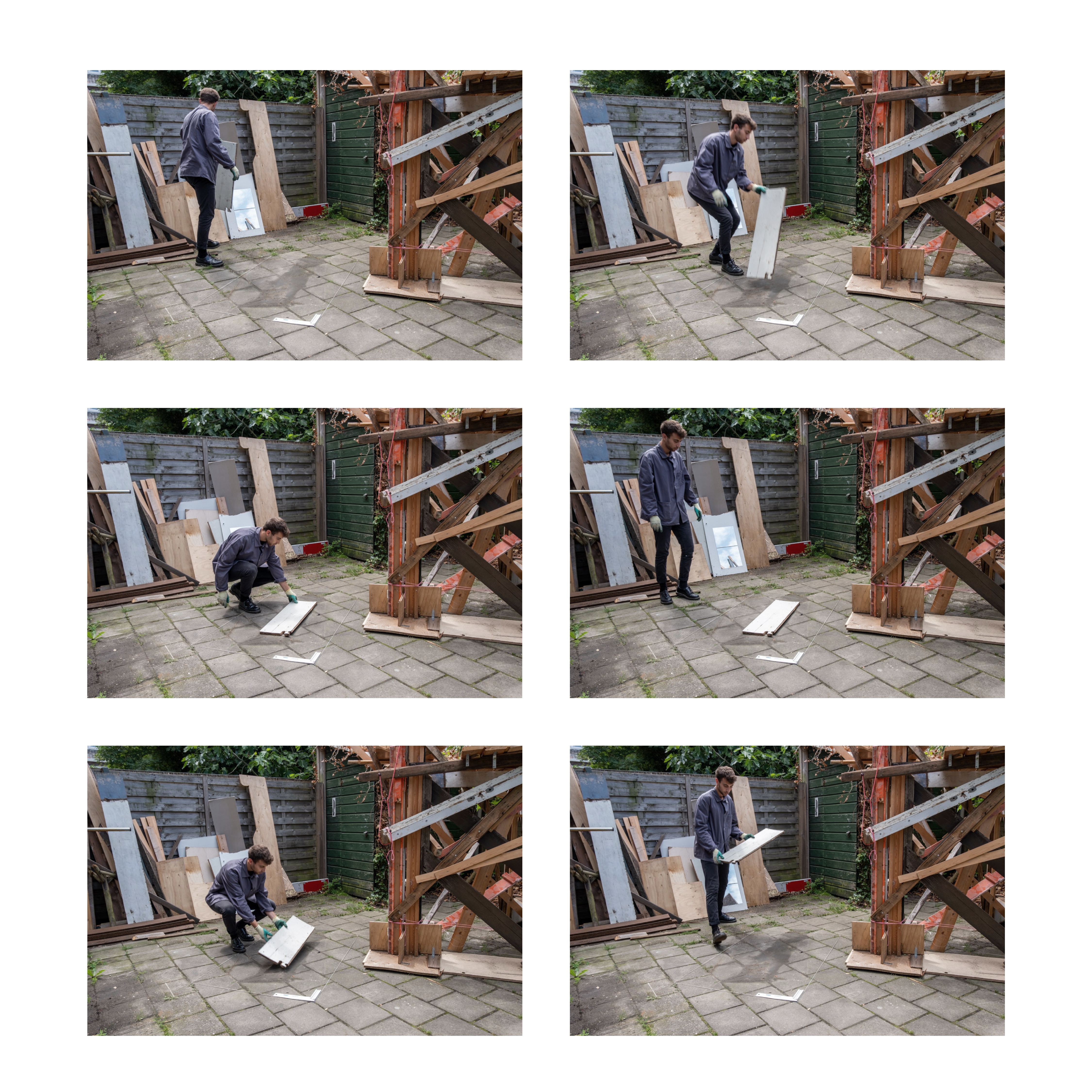 Performance of the scanning process 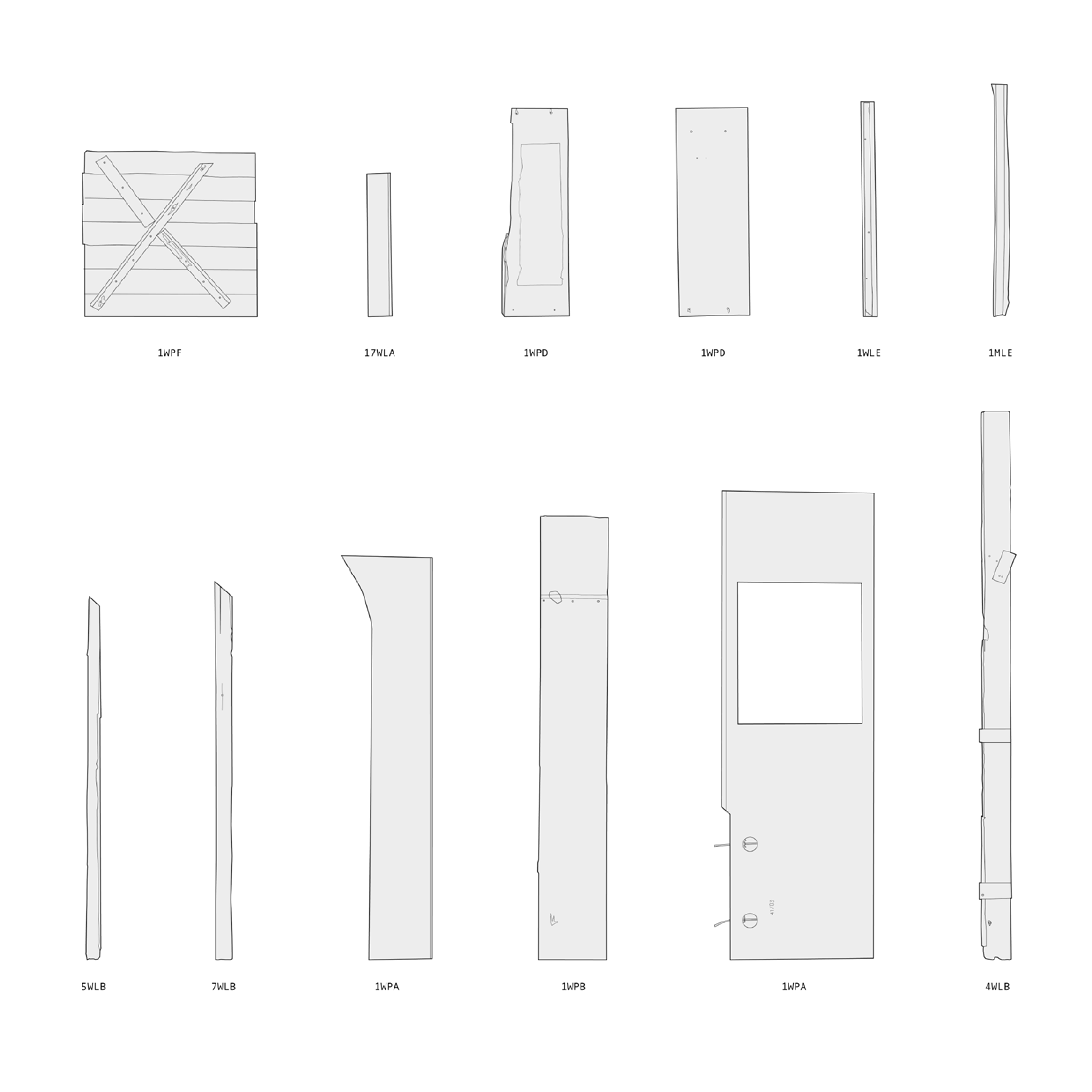 After completion, the formal analysis can be turned into a digital catalog of the pieces available. This categorization includes measurements in the three dimensions, material, and original function of the piece. When objects become informational, usual means of digital design can eventually be applied to understand how to better re-purpose a specific piece of garbage.

Finally, with a digital catalog of pieces available, structural solutions can be tailored to the specificity of the project and the materials involved. This caused during construction the implementation of a fit-for-purpose logic that often resulted in over-sized pieces and complex hinges and joints where multiple materials arranged the required structural capacity, compensating for their weakness due to weathering and/or deformations.

The lack of an original design also implied a wide application of elements absorbing the tolerance between components meant to serve a different purpose (doorframes, window frames, packaging elements). A differential space is often filled with smaller and more generic elements.

Details of some joints and solutions that show how the contingency of building with debris was accounted for by introducing tolerances and using a fit-for-purpose building logic. 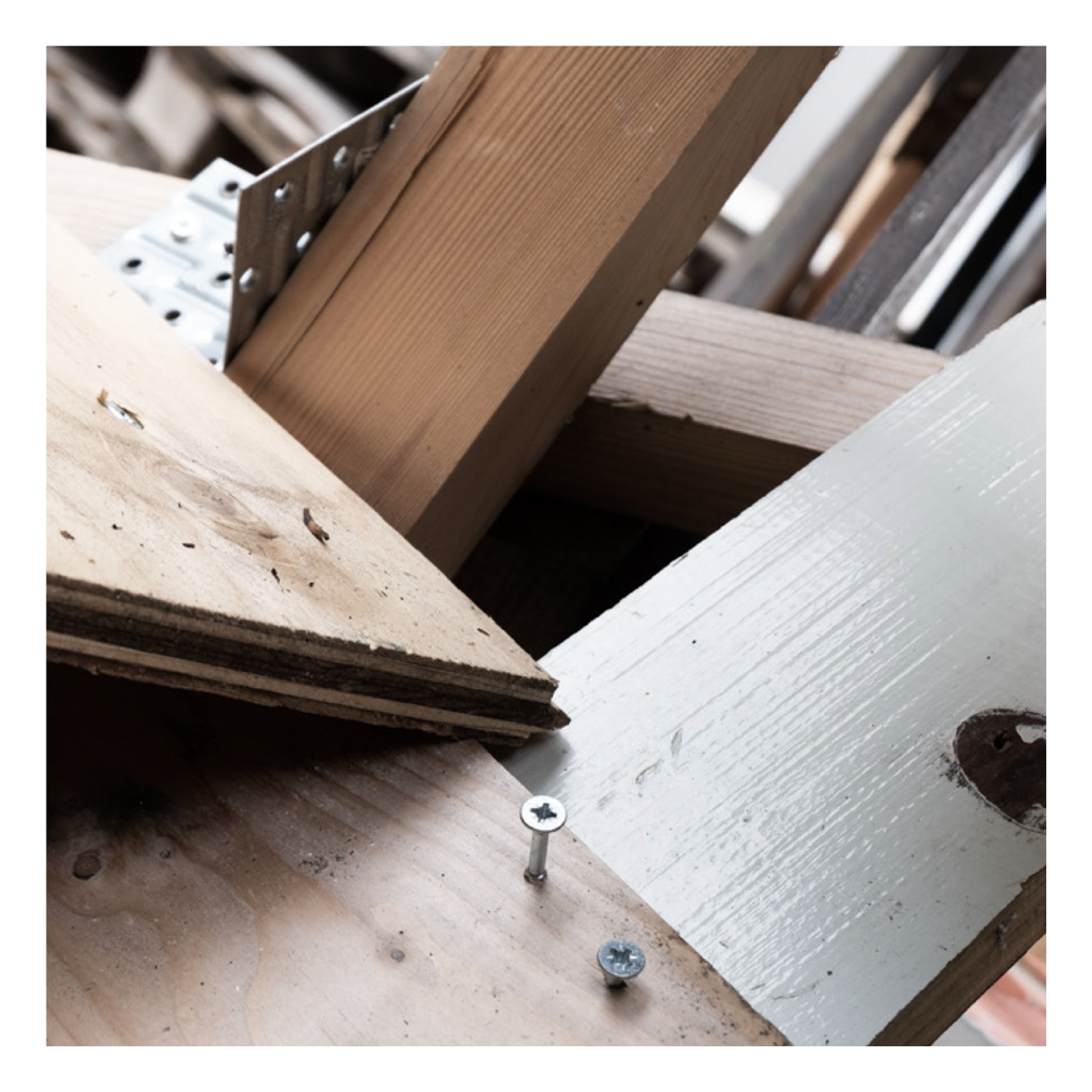 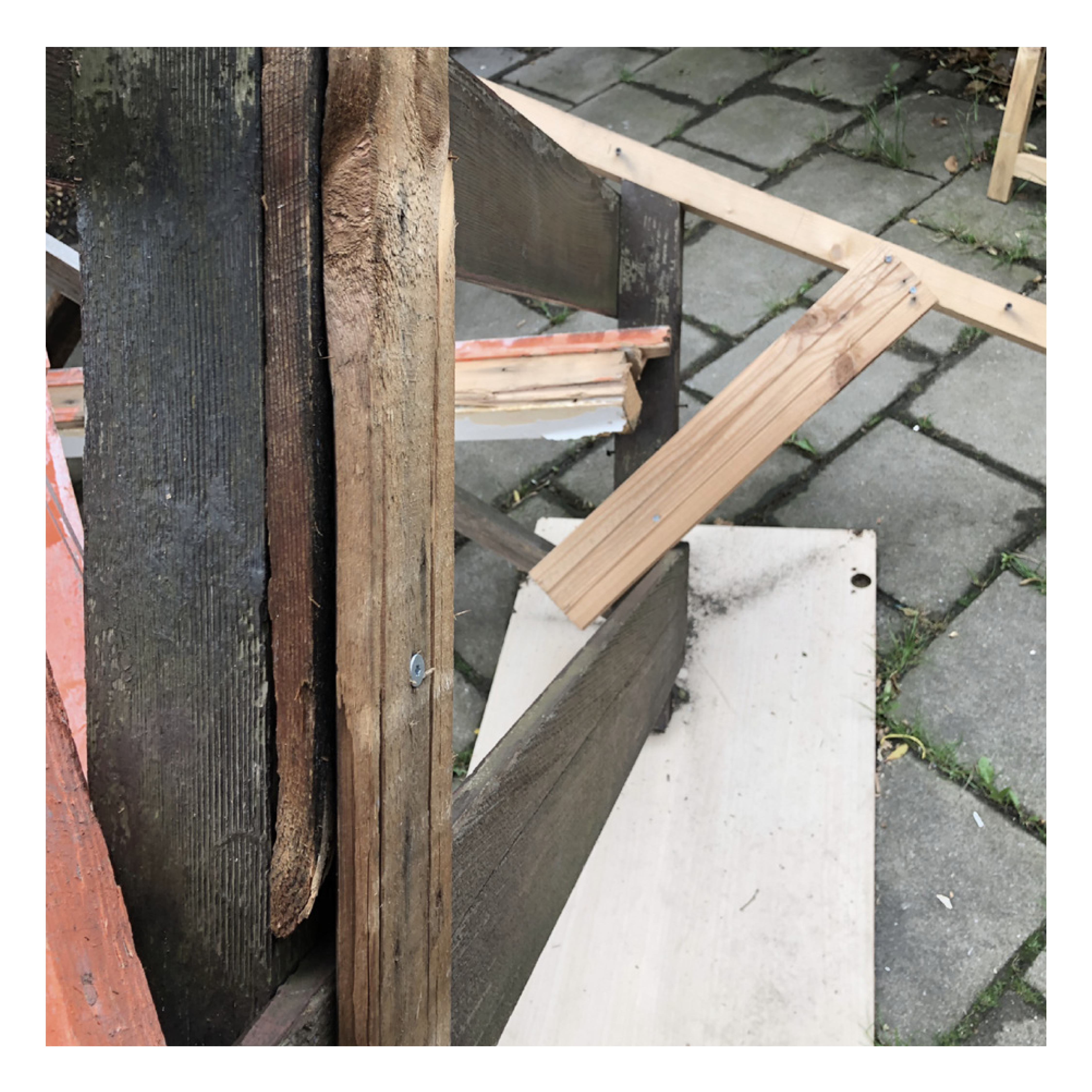 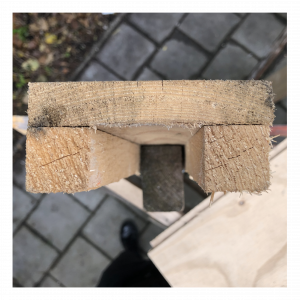 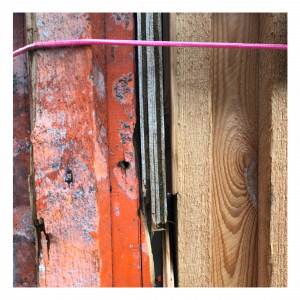