The project as sensing machine 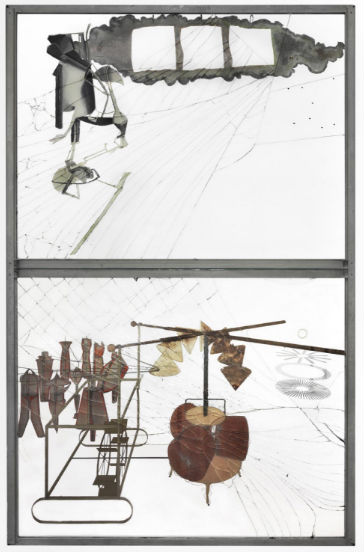 Figure 3 – Marcel Duchamp – The Bride Stripped Bare by Her Bachelors, Even

In Anti-Oedipus (1972), French philosopher Gilled Deleuze and psychoanalysis Felix Guattari theorize about desire as a productive force as Desiring Machines. They see desire as a machine, and the object of desire is another machine connected to it. Machines want to connect with other machines to come into motion and to actualize themselves. They write: “The world is comprised of ‘machines driving other machines, machines being driven by other machines […] all the time, flows and interruptions.”[1] 1 - Deleuze, G., & Guattari, F.Anti-Oedipus (1ste ed.).Penguin Putnam Inc., 2009. Desire, refers not to sexuality per se but to the will of the machine to connect to others and to proliferate the flows that run through it; it is linked to sexual desire but is not limited to it. It is a pleasurable force of appropriation of what is outside oneself incorporating into oneself. The desire of the machine is to connect to its environment and to humans.

Moreover, they write: “A careful dismantling of the organism through practices that include the hypochondriac body, the paranoid body, the schizo body, the drugged body, and the masochist body.”[1] 1 - Deleuze, G., & Guattari, F.Anti-Oedipus (1ste ed.).Penguin Putnam Inc., 2009. However, what would a sensing body be like?

In Capitalism and Schizophrenia, Deleuze and Guattari continue with their theory of the Body without Organs, which is a notion of the body that does not hinge on the singularity and the autonomy of each organ, but where organs would be indeterminate. It is a structure or zone without an imposed organization that can be sentient or inanimate. They write: “A body without organs is not an empty body stripped of organs, but a body upon that which serves as organs. The body without organs is not a dead body but a living body all the more alive and teeming once it has blown apart the organism and its organization. . . . The full body without organs is a body populated by multiplicities.”[1] 1 - Deleuze, G., & Guattari, F.Anti-Oedipus (1ste ed.).Penguin Putnam Inc., 2009.

Deleuze and Guattari describe the Body without organs as a site of intensity where there are no organs but flows and intensities and it is a fusion of the internal and the external. They consider the body as a relationship between multiple smooth surfaces and as a reversible skin. The project is conceived of as a body without organs; as one continuous sensing body without an imposed organization, without distinction in structure and without distinction between the internal and the external. 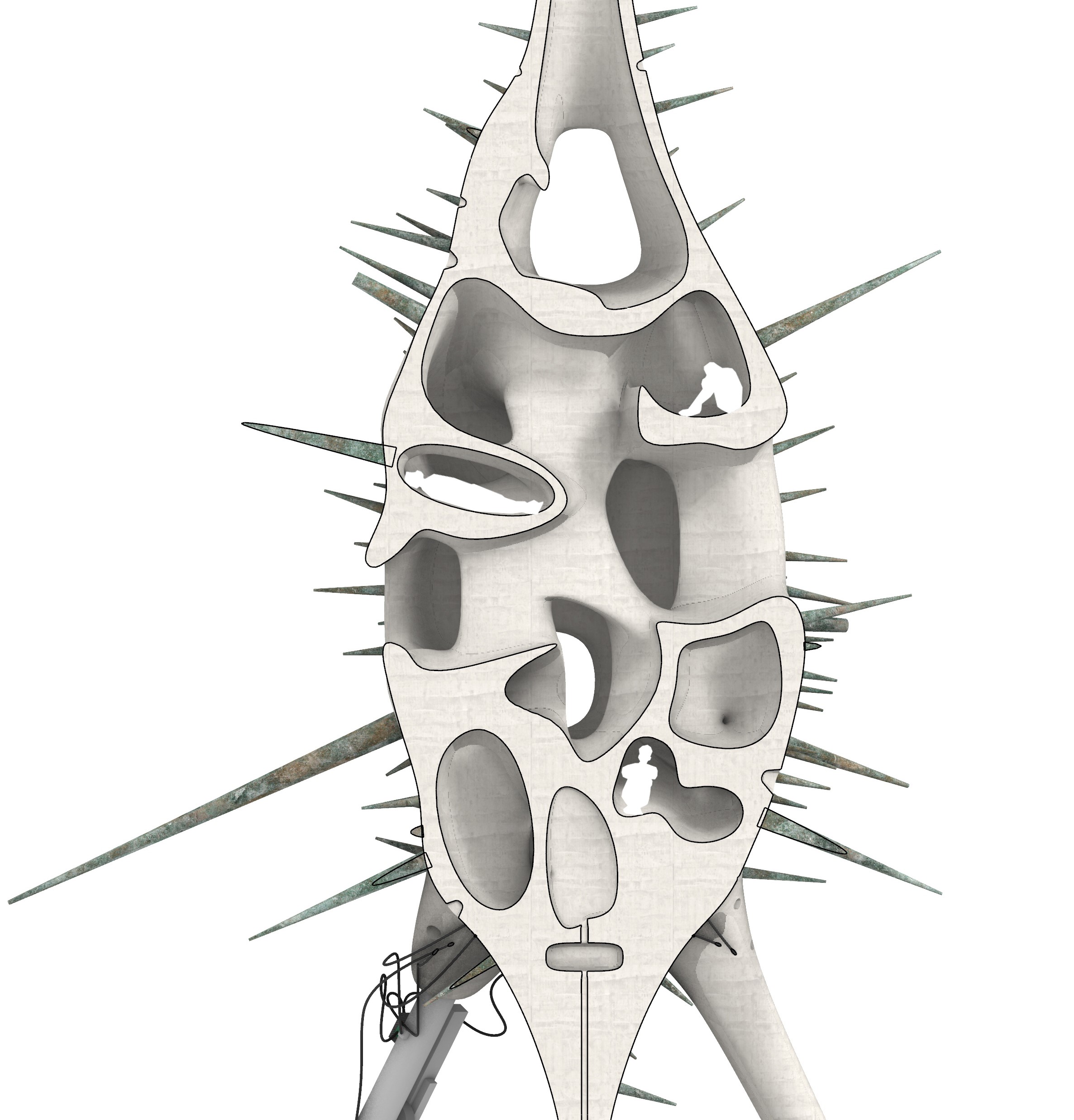 In ‘The Fold: Leibniz and the Baroque’[2] 2 - Deleuze, G.The Fold: Leibniz and the Baroque (Illustrated ed.).Univ Of Minnesota Press, 1992. Deleuze sees folding as the expression of flows running through the machine. The concept of folding links the Desiring Machines to the Body without Organs where the intensity of flow is expressed in the structure. Through folding, there is a constant exchange between what is sensed on the exterior, and what is processed in the interior.

Folding creates an architecture of becoming where the sensing body slowly envelops the human body. As defined by the desiring machines, the machine wants to be appropriated by the body through plugging in. 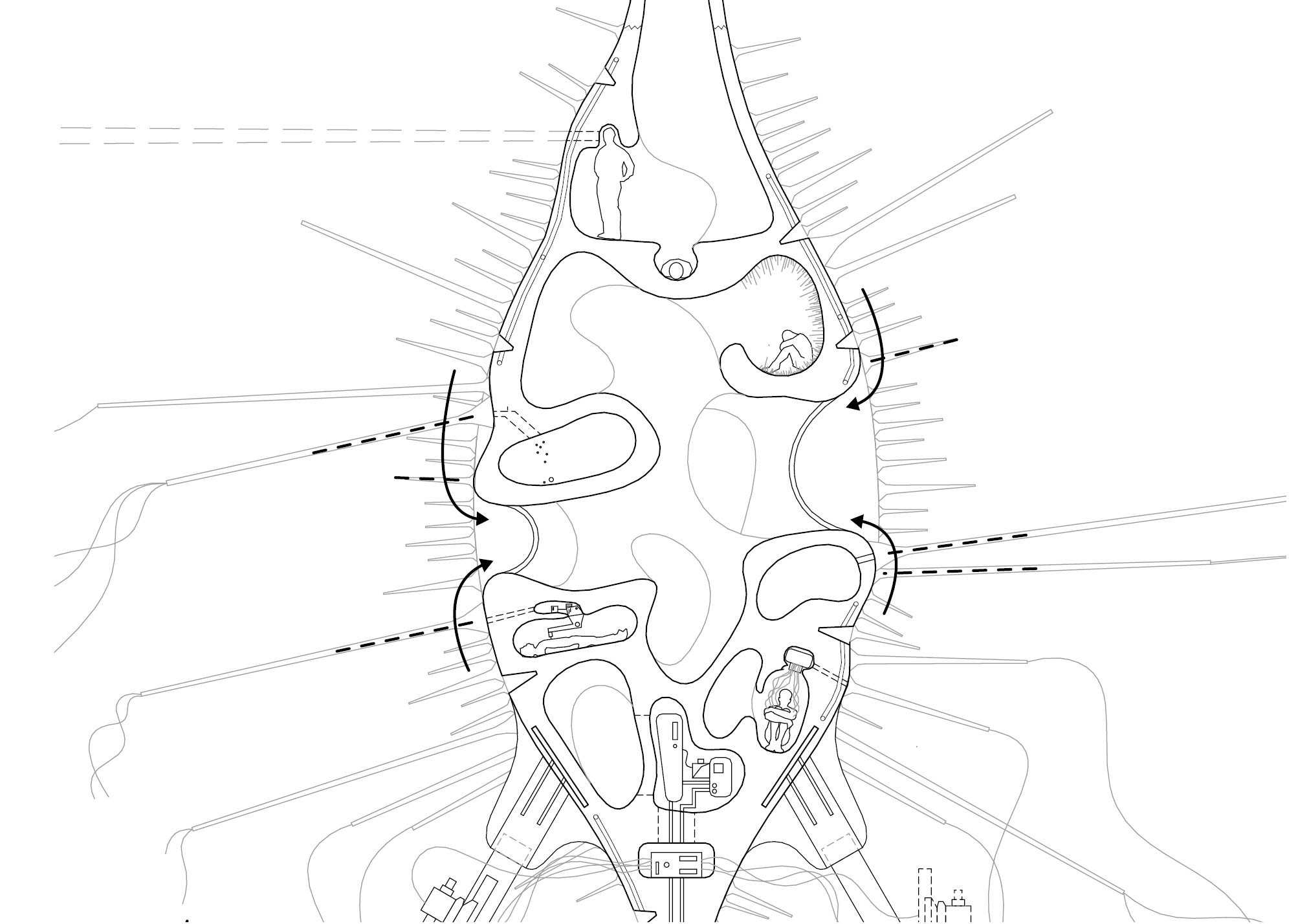 Logic of folding – Where sensed information (force) comes in, the shell folds inwards as an expression of the flows running through the machine.

Next: The folded shell >