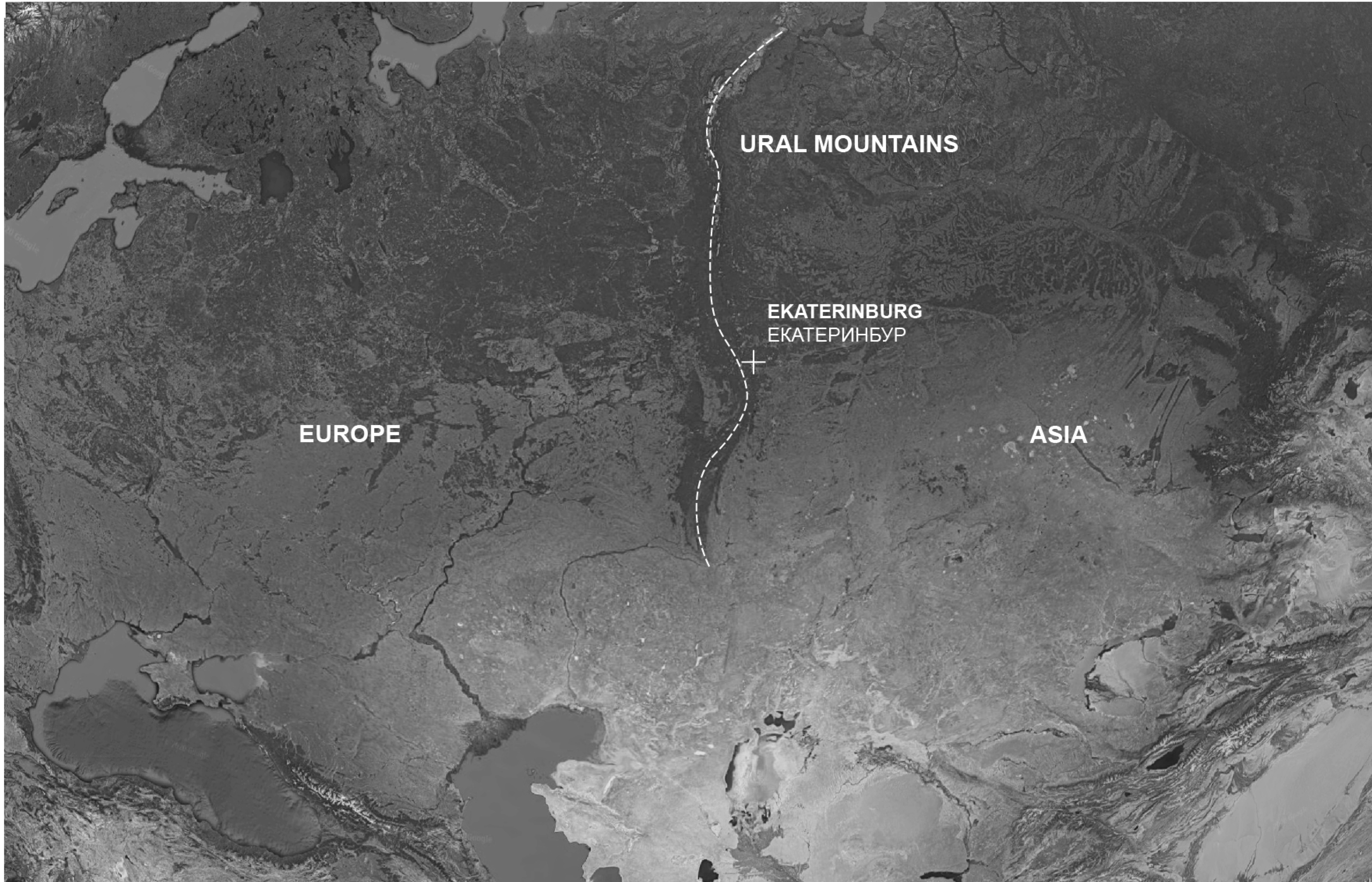 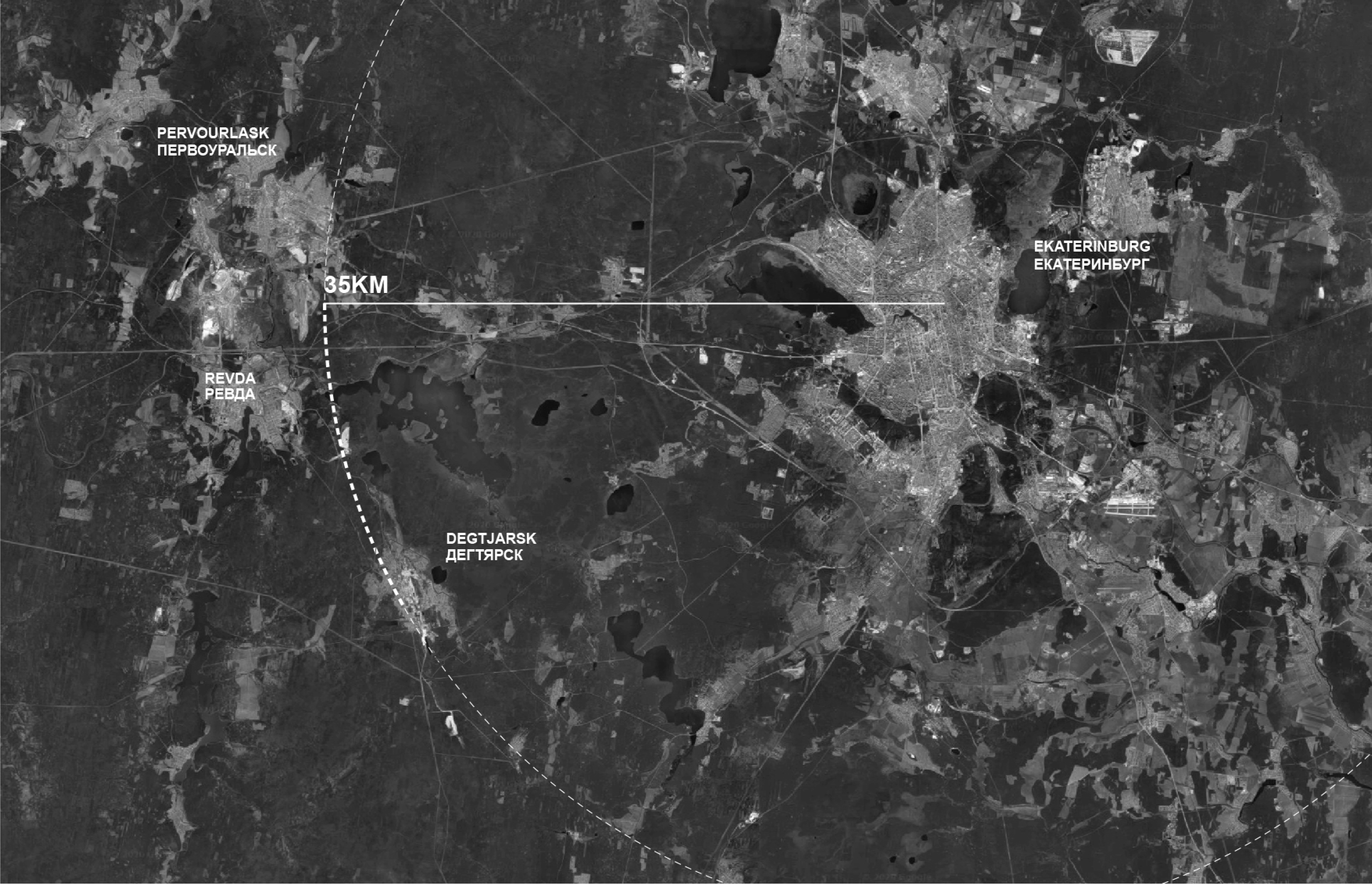 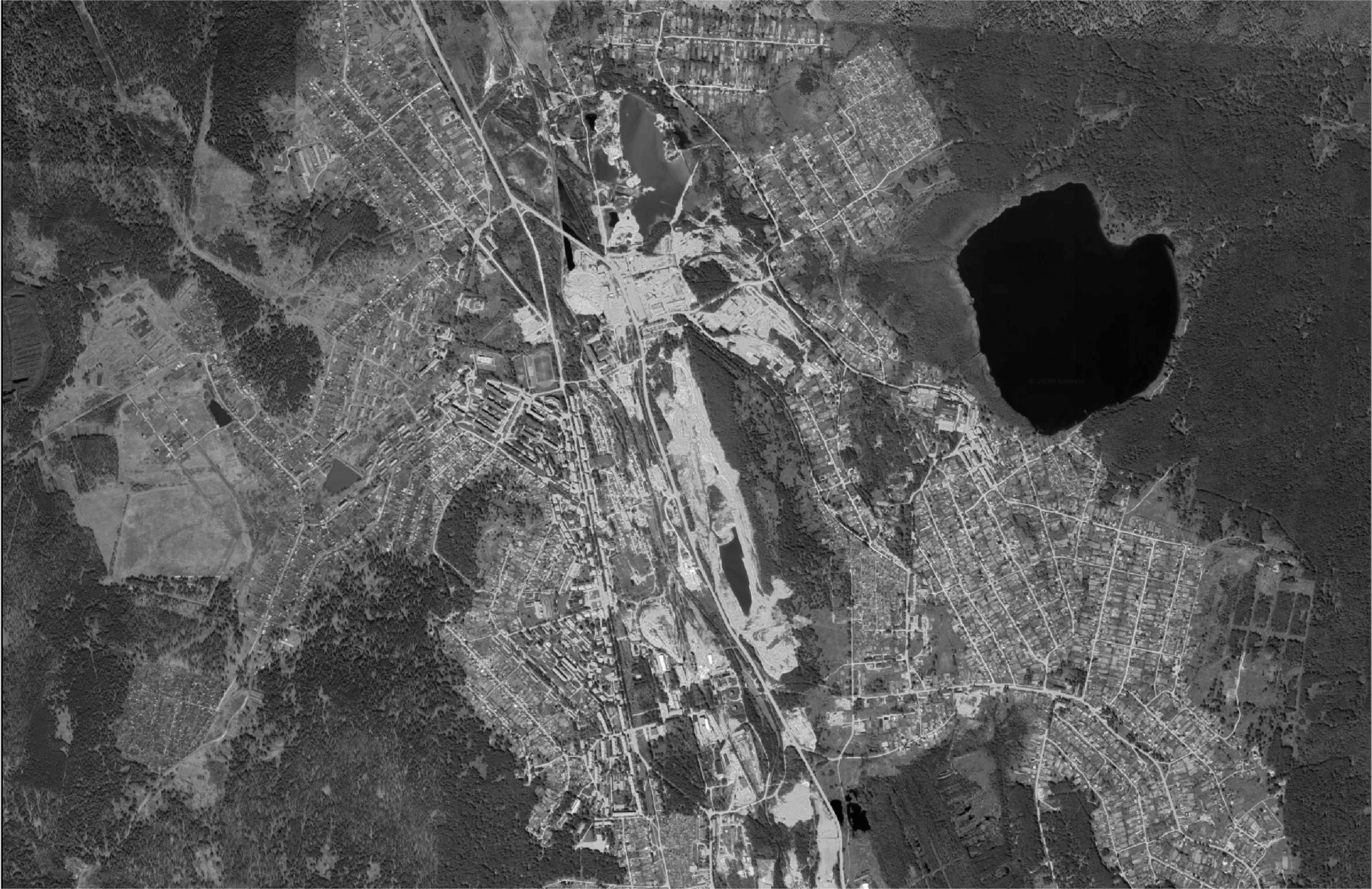 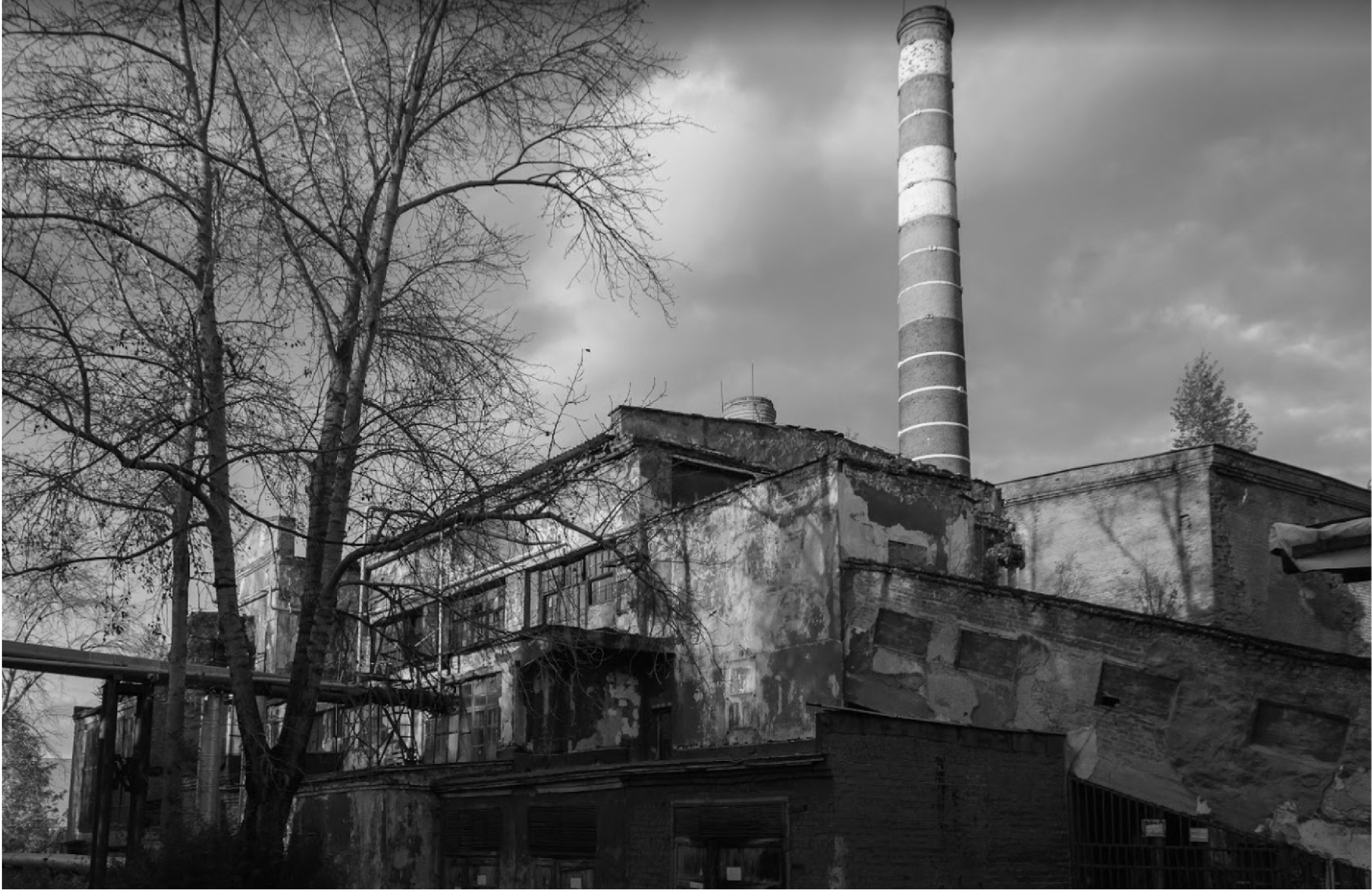 The town of Degtjarsk is part of a system of satellite cities revolving around Yekaterinburg, distant 35km from it. The Sverldlovsk region is situated just across the Ural Mountains on their eastern side, and its growth started when different mineral deposits were found and the whole territory, during Soviet times, took a particularly strong industrial vocation. Strategically placed at the crossing between the two poles of Russia and easily defendable due to its inner location in the country, the whole territory here was dealt with as a matter of planning and controlling systems of industrial operations at different scales. From the local extraction and refinement of resources to the national and global transportation and logistics using the Trans-Siberian railroad.

What does it mean to conceive the territory as a machine? What is the spatial outcome of over imposing a projected and absolute idea of space onto the ‘dirty’ and physical territory? 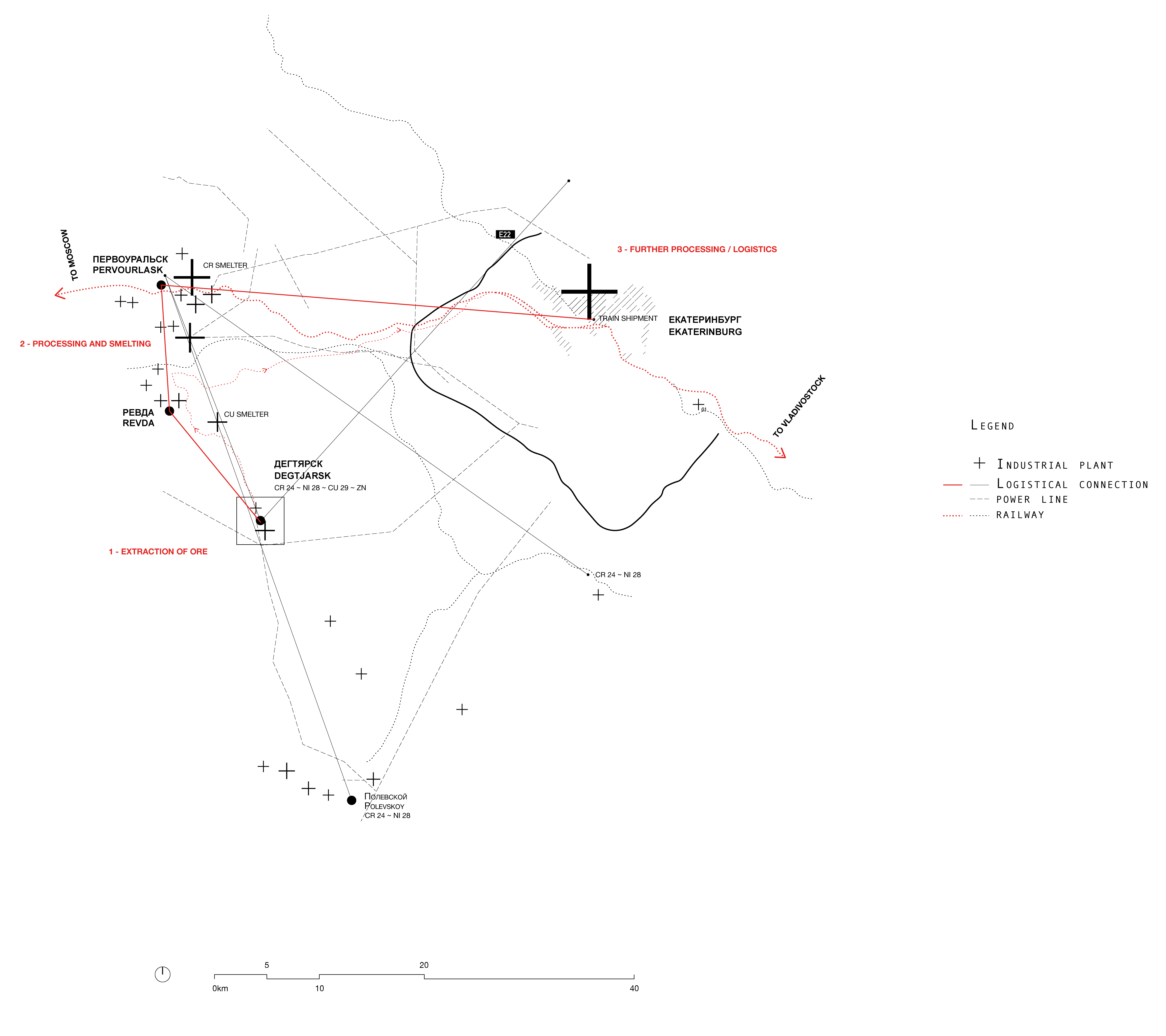 Operative systems: Here it is shown the role of Degtjarsk in its territorial framing. In the territory conceived as a machine, this town represented the first step of resource extraction, following smelting and transportation in nearby towns and Yekaterinburg. 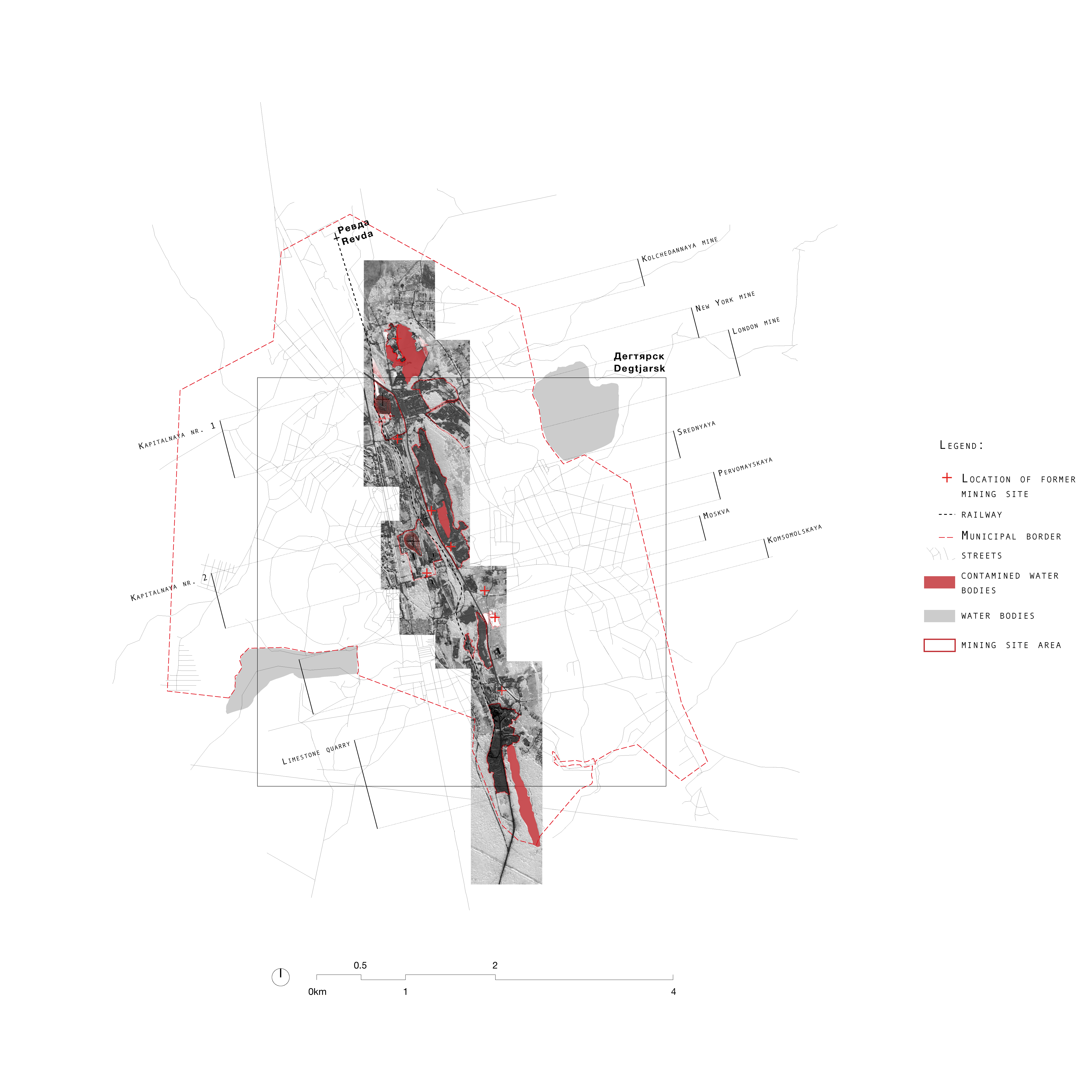 Mapping of former mining facilities and polluted water bodies. Alltogether they form a clear fracture in the urban texture of Degtjarsk. 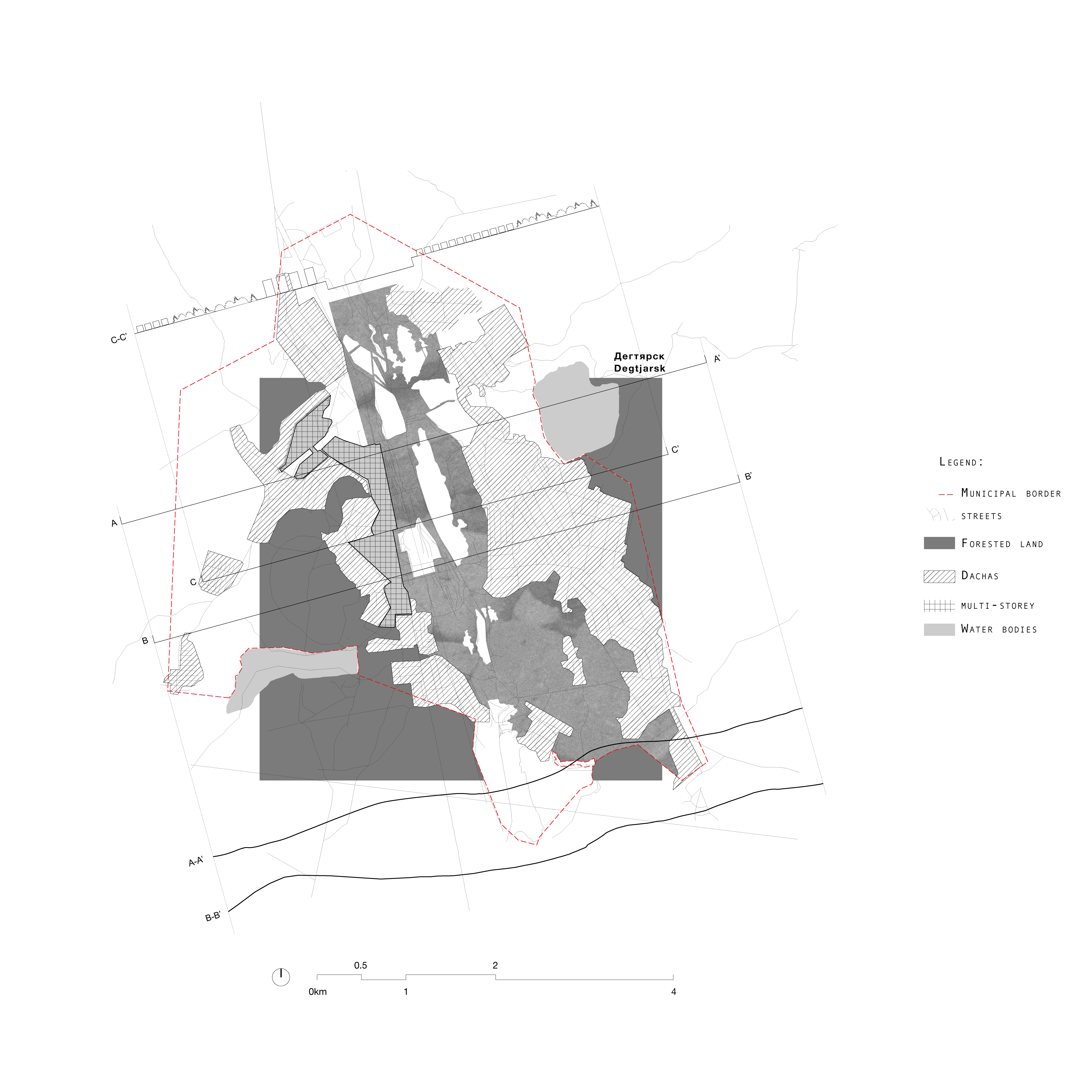 Mapping of the urban texture and transversal sections underlying the concentric role of the inner industrial area.
The result, in the town of Degtjarsk, was the spatial translation of an autoreferential logic, developing itself from the inside out. A spine of industrial facilities and mining complexes, going from south to north, is the core of the spatial significance of Degtjarsk. The urban fabric developed on its sides, creating at first, a very well-identified sequence: from the forest to the industrial plant, as one progresses inwards. Now that its infrastructure is collapsed, the core of Degtjarsk is the spatial representation of a void, a discontinuity, a leftover stripped of its original purpose, where the boundaries to establish a difference between its components are blurred and ambiguous.

Natural and artificial water bodies interact with each other, and both have an acid red hue given by copper pollution of the soil. Massive waste heaps compete in scale with the surrounding orography. In this sense, Degtjkarsk, is the most literal translation of Anthropocene we can find. The result of man-made activities is so onerous here as to produce a territorial effect, creating a double negative. Excavation and backfilling actions have engraved and populated the landscape with topographically relevant elements, to the extent of competing with the preexisting morphology of its surface. 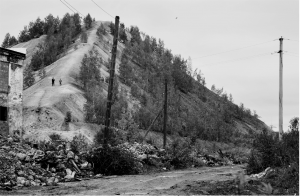 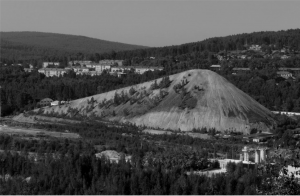 Waste heap of the Kapitlanaya nr2 mining site. The result of man-made activities here rises to a topographical dimension. 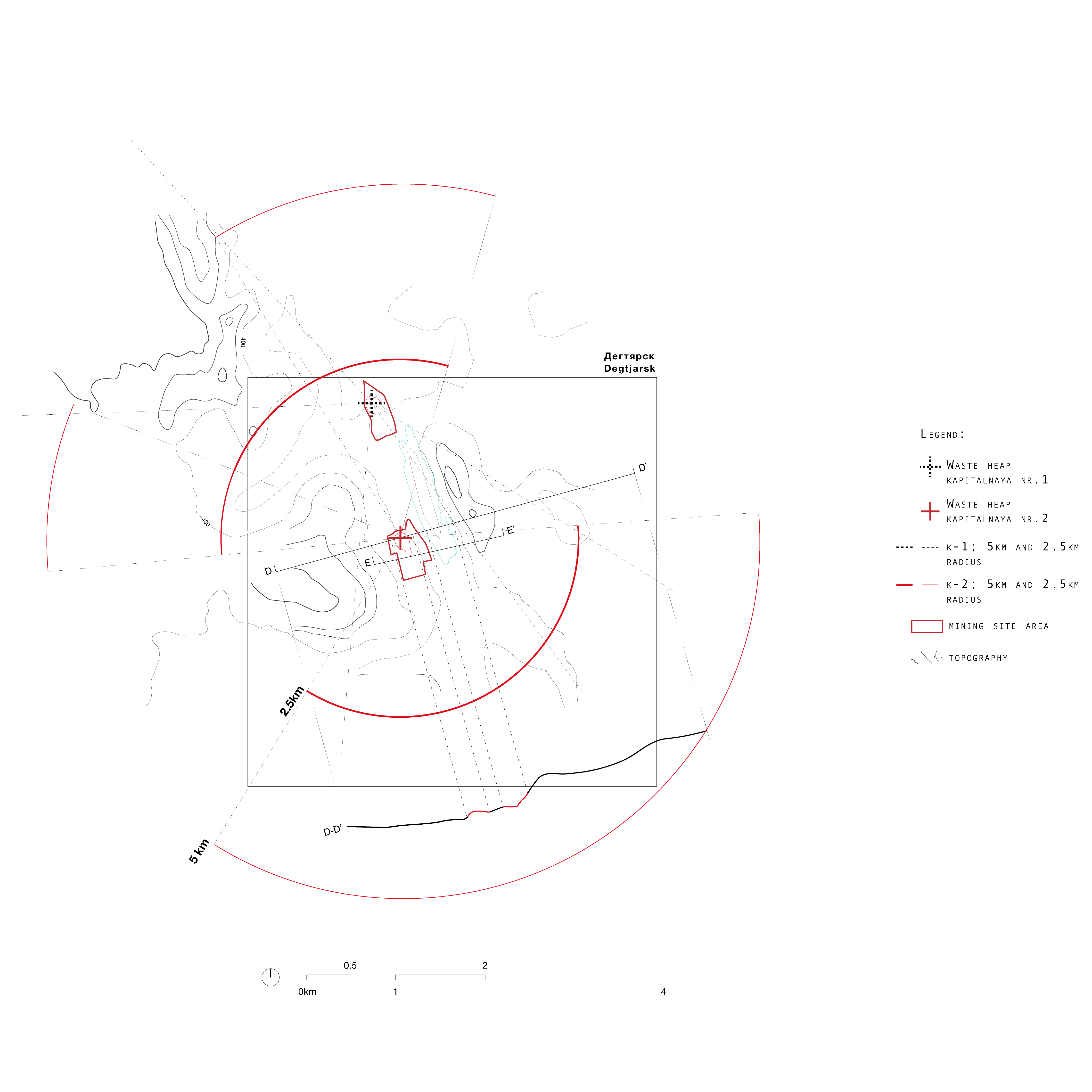 Out-of-place artifacts: mapping of the visibility radius of the two massive waste heaps in Degtjarsk. The result of industrial activities represents an aesthetic and territorial dominant, the artificial mountains are constantly visible from each side of town. 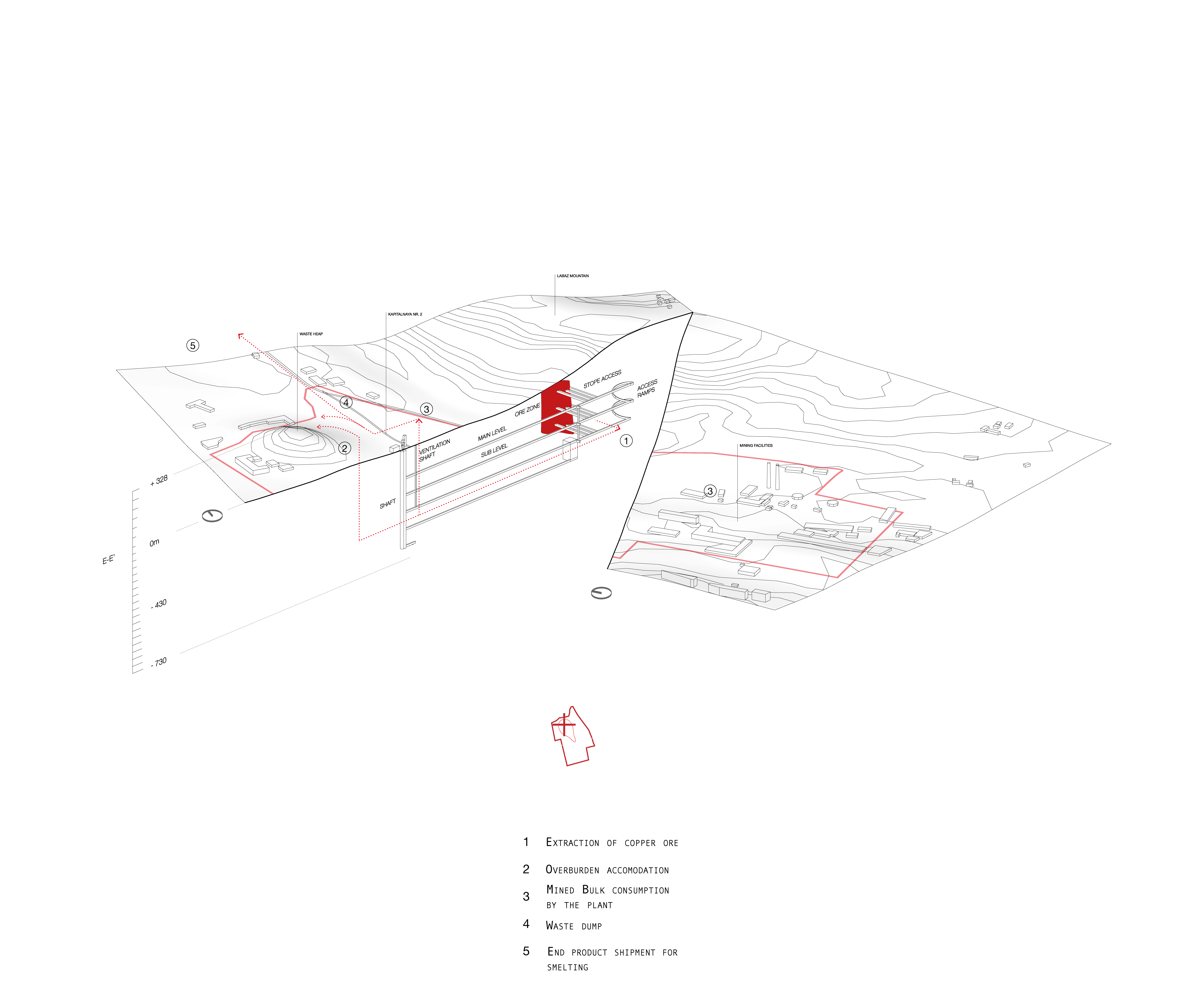 Operative systems: crosssection of the mining operations conducted at the Kapitalnaya nr2 mining site. Copper ore from underneath the mount labaz is extracted and a double negative is created: emtying the ground, and backfilling waste on the surface.
Much like at the regional scale, the extraction of resources in Degtjarsk was a mechanization of space above as well as below the ground, underneath mount Labaz. The ore was collected in underground tunnels, then it was brought to the surface and was sorted and refined, and finally shipped to the near Revda smelting plants. Degtjarsk was part of a concentric logic of performance-driven operations, a tile in a process of industrial production, namely that of extraction of primary resources. Actions of filling extracting, excavating, separating, not only involve an intense relation with the surface, the crust, modifying its morphology, but the quality of these actions also had repercussions on the chemical and mineral composition of the soil. 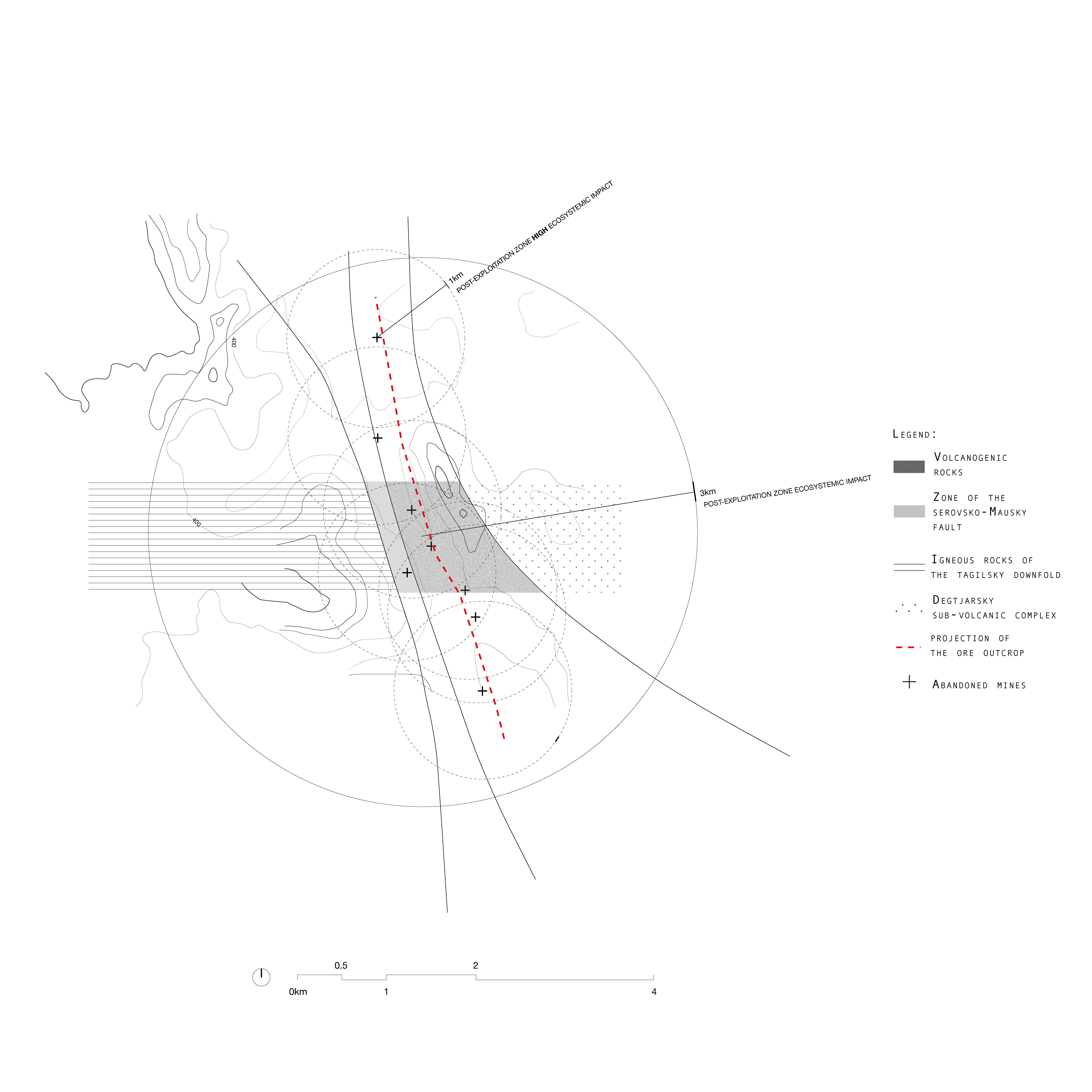 Mapping of the impact of mining activities on the chemical compositoin of the soil. Following the industrial area, an ore outcrop line establishes a different geological composition for the north-south axis of high ecosystemic impact zones.
The contamination of superficial layers with heavy metals created a different composition mirroring the urban layout and differentiating a core, where industrial activities took place, from its periphery. As a result, the central spine represents a high ecosystemic impact zone, where the singular and technogenic composition of the soil, gave rise to an alternative biotope as a result of the dominance of species which can cope with the high concentrations of metals and pollutants in the ground. 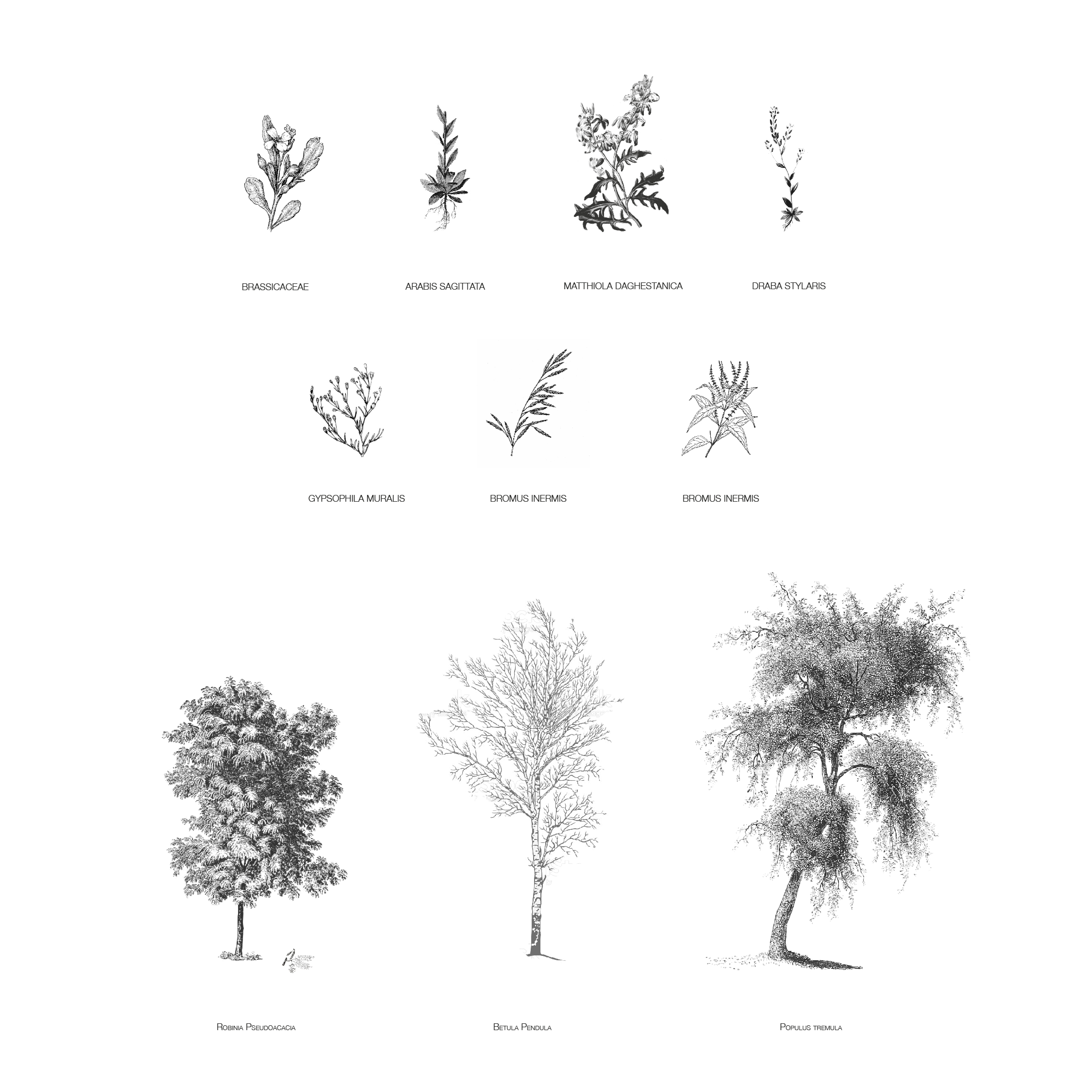 Typological study of technogenic species ranging from shrubs and herbaceous to trees. 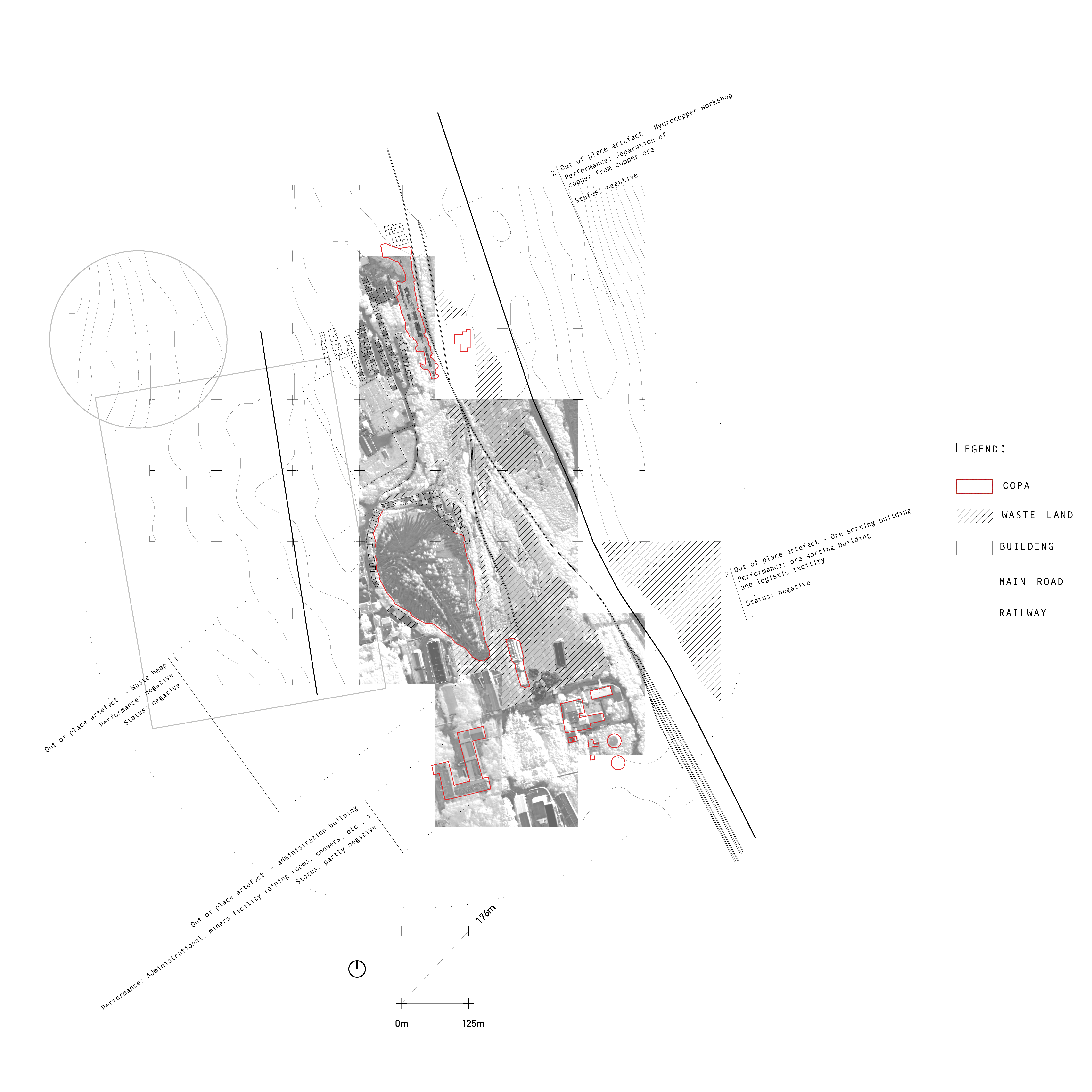 Out-of-place artifacts: Site analysis of the location and original function of the former mining infrastructure in the Kapitalnaya nr2 mining site. 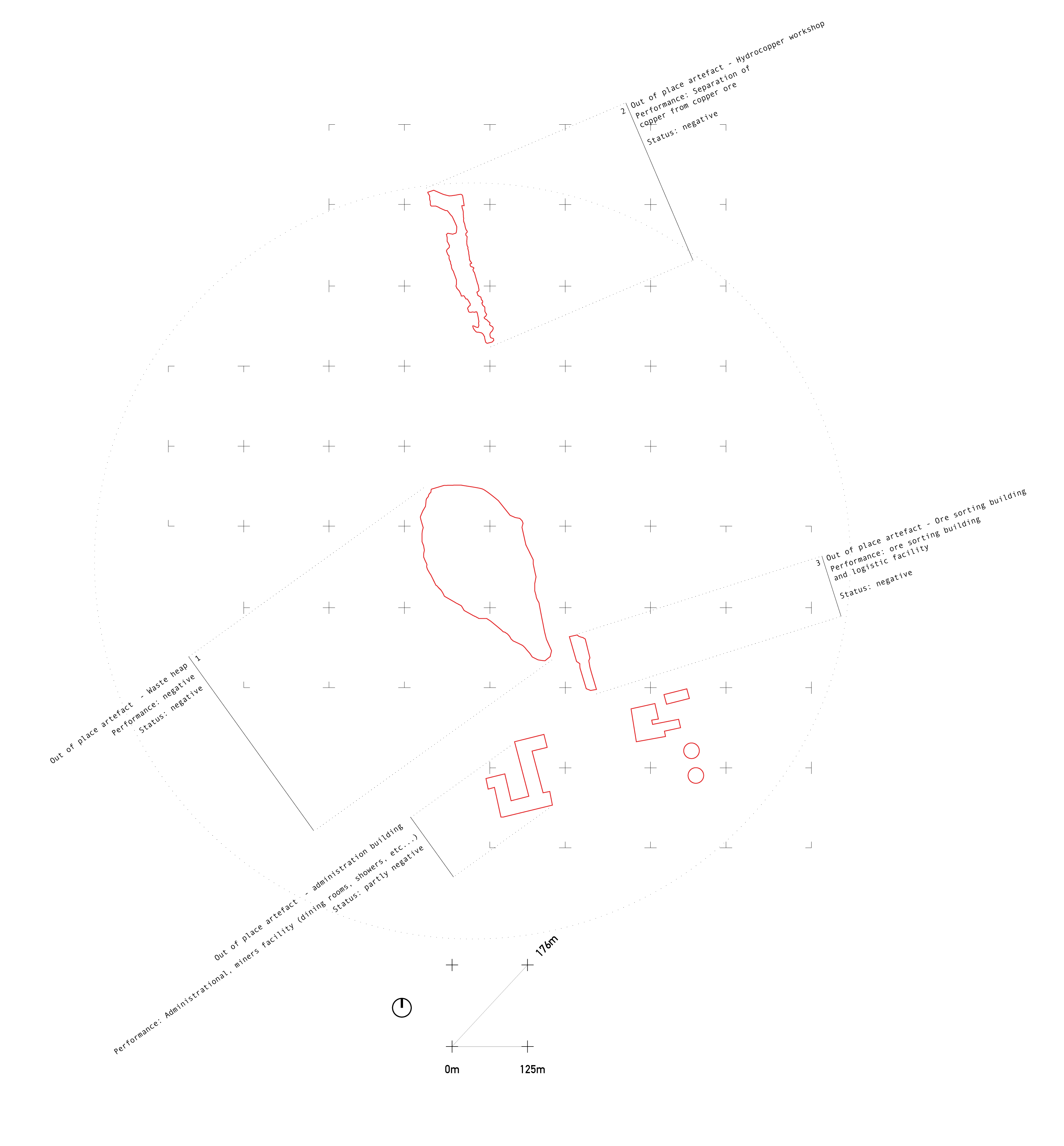 Catalogue and isolation of former mining infrastructure. Administrative building,
ore sorting building, hydrocopper workshop, waste heap, beneficitan plant and water tank.
With a closer look to the site of intervention, the Kapitalnaya nr. 2, the void as an anti-landscape takes on material connotations. A pervasive ambiguity characterizes the site and its empty follies, the scattering of detriments gives it an almost metaphysical-like atmosphere, where the memory of all this operative frenzy is now reduced to a bunch of pieces and fragments.

An ore sorting building, a collapsed hydro copper workshop, a waste heap, water tanks, and an administrative and service building. They are different from the rest of the town, old and left abandoned. They represent the material consequence of a breakdown. 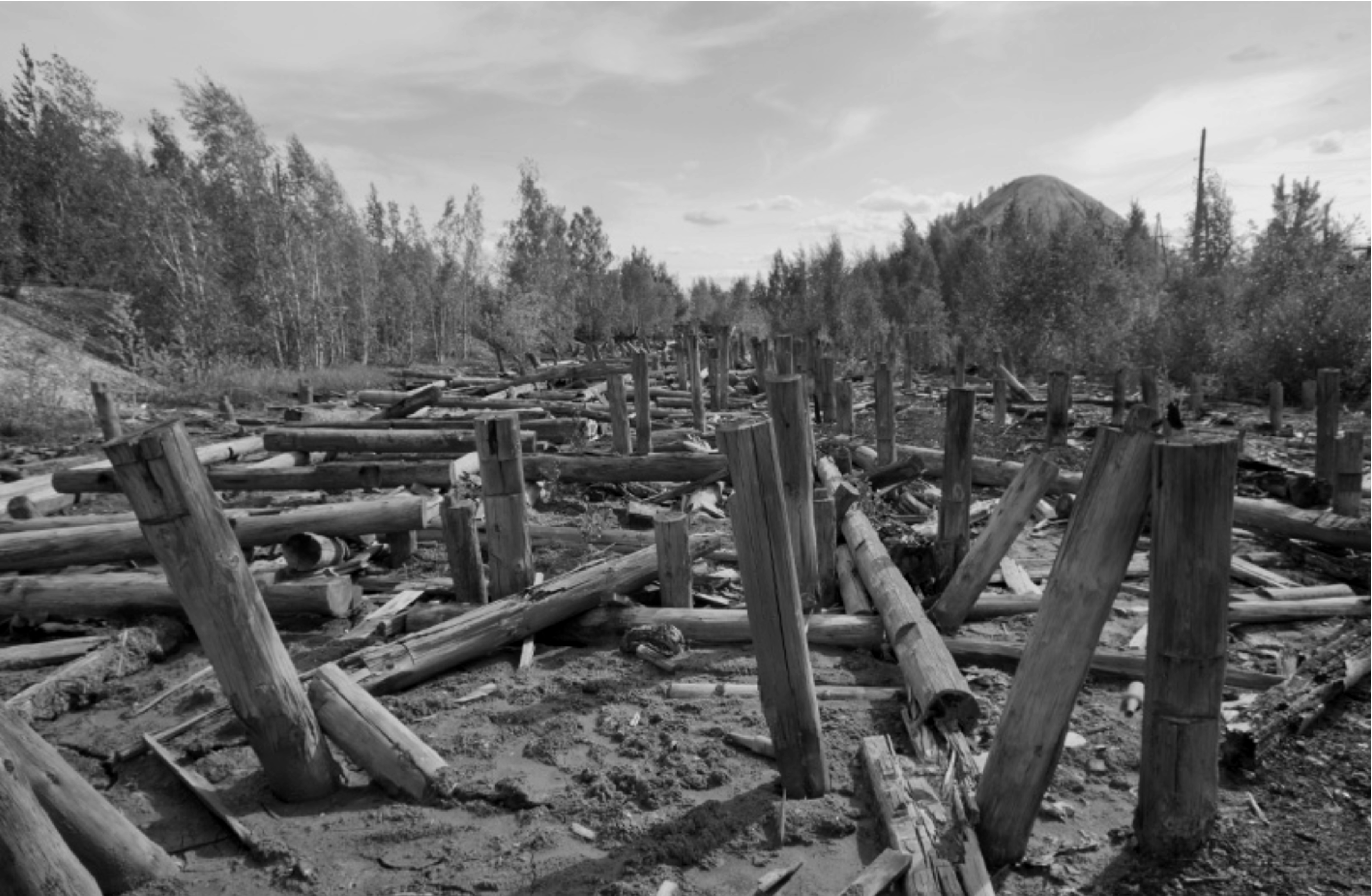 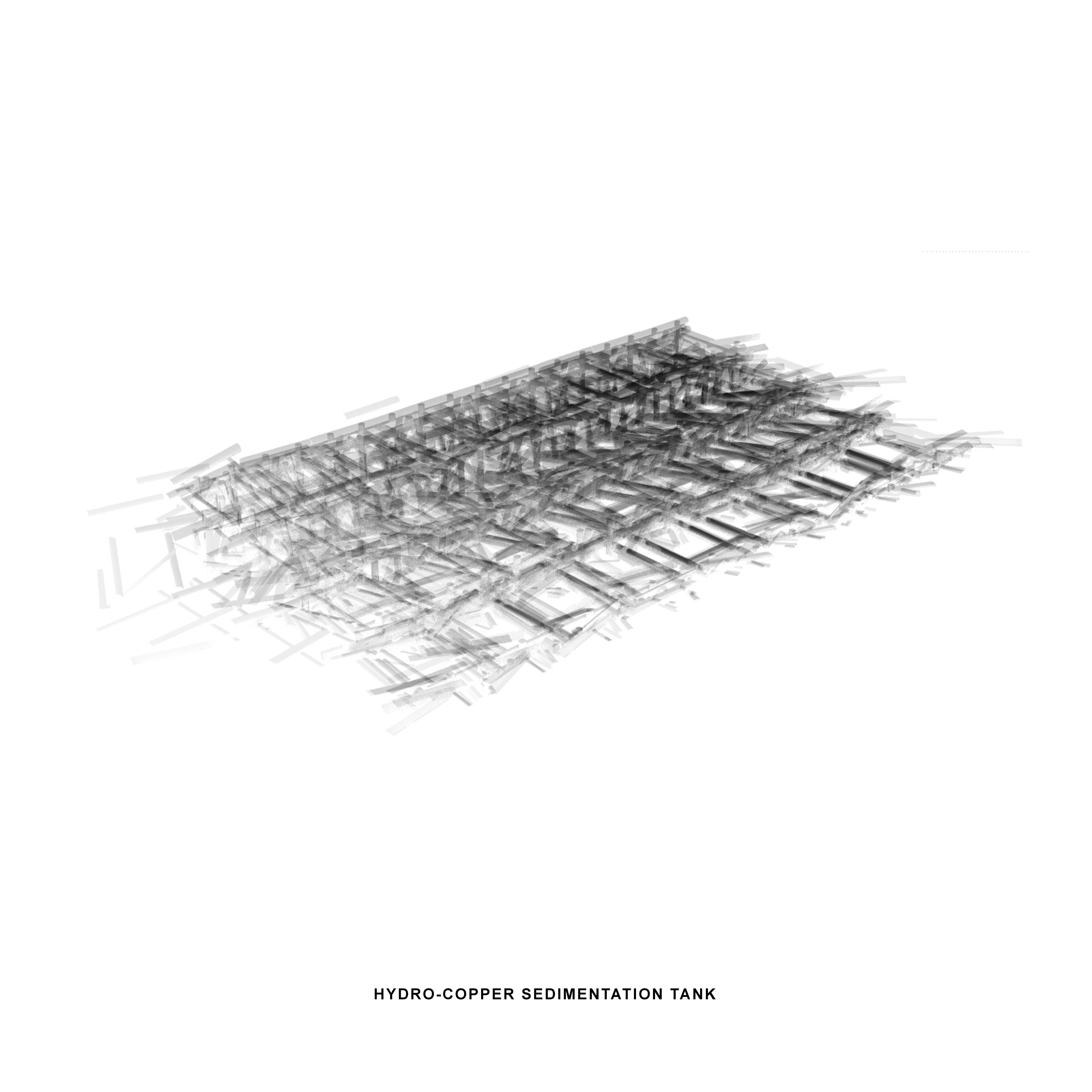 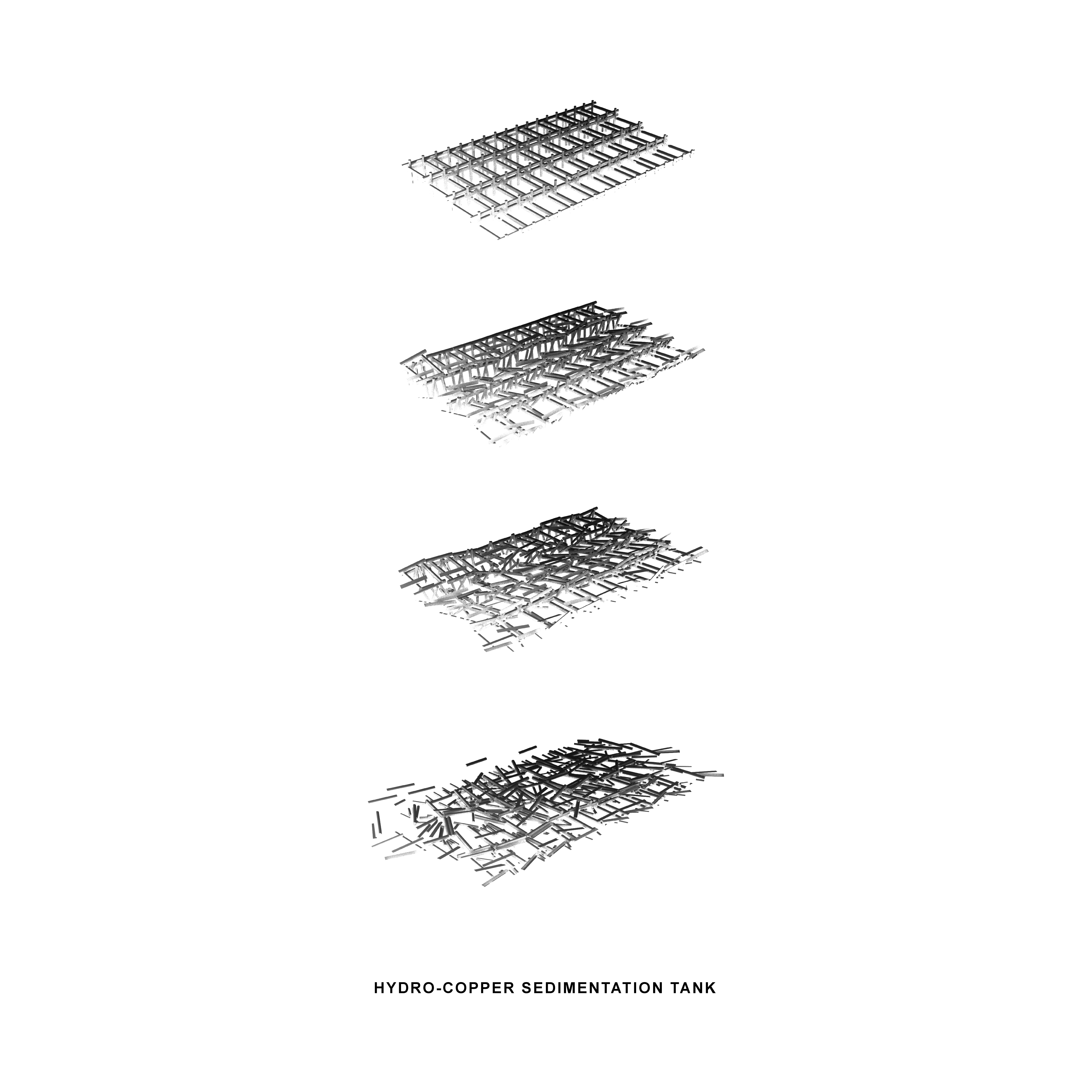 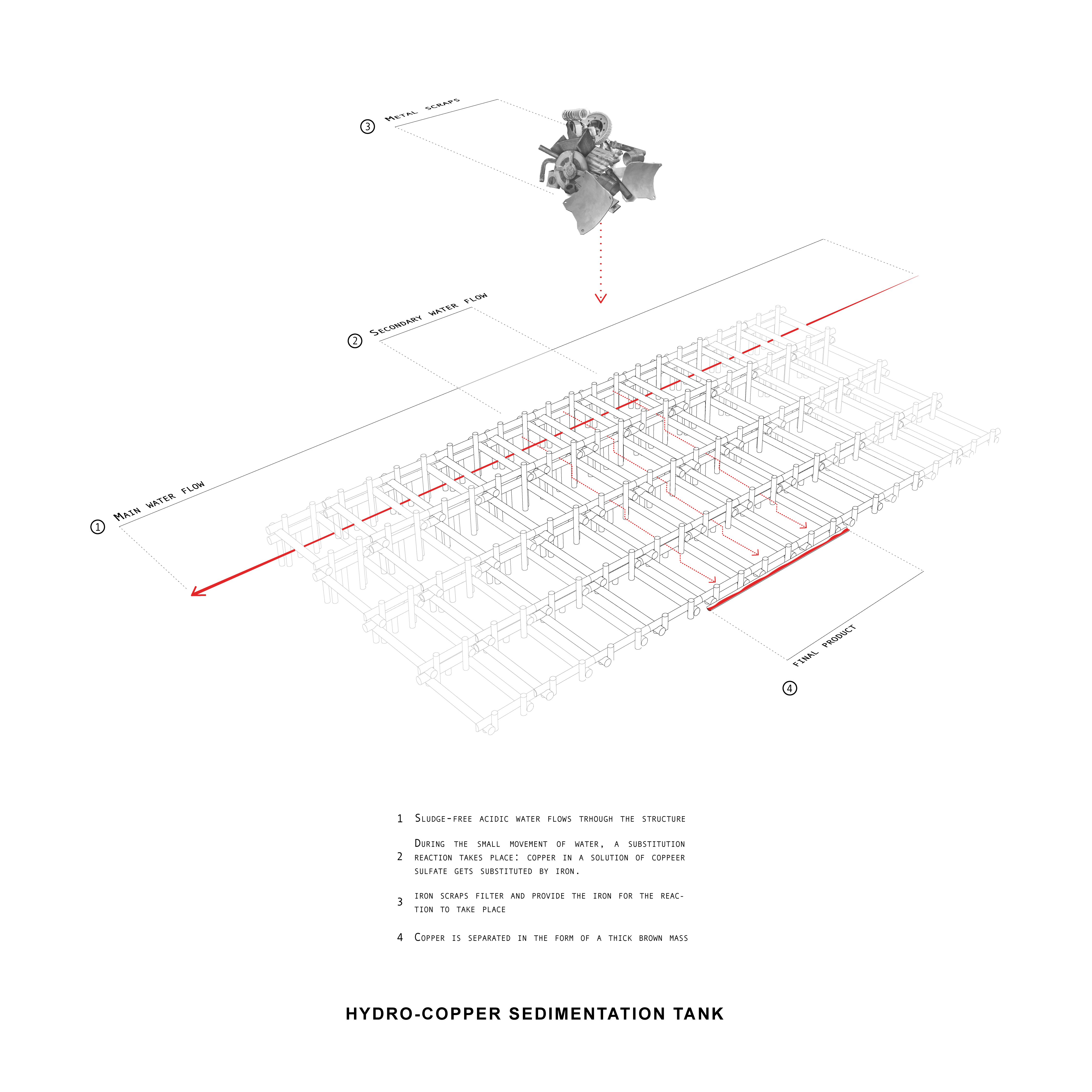 The original function of the hydrocopper workshop was to separate copper ore from raw mining excavation products. A substitution of ore with iron using scrap metal and a passive flow of water used to extract copper in the form of a brown mass collected in gutters. 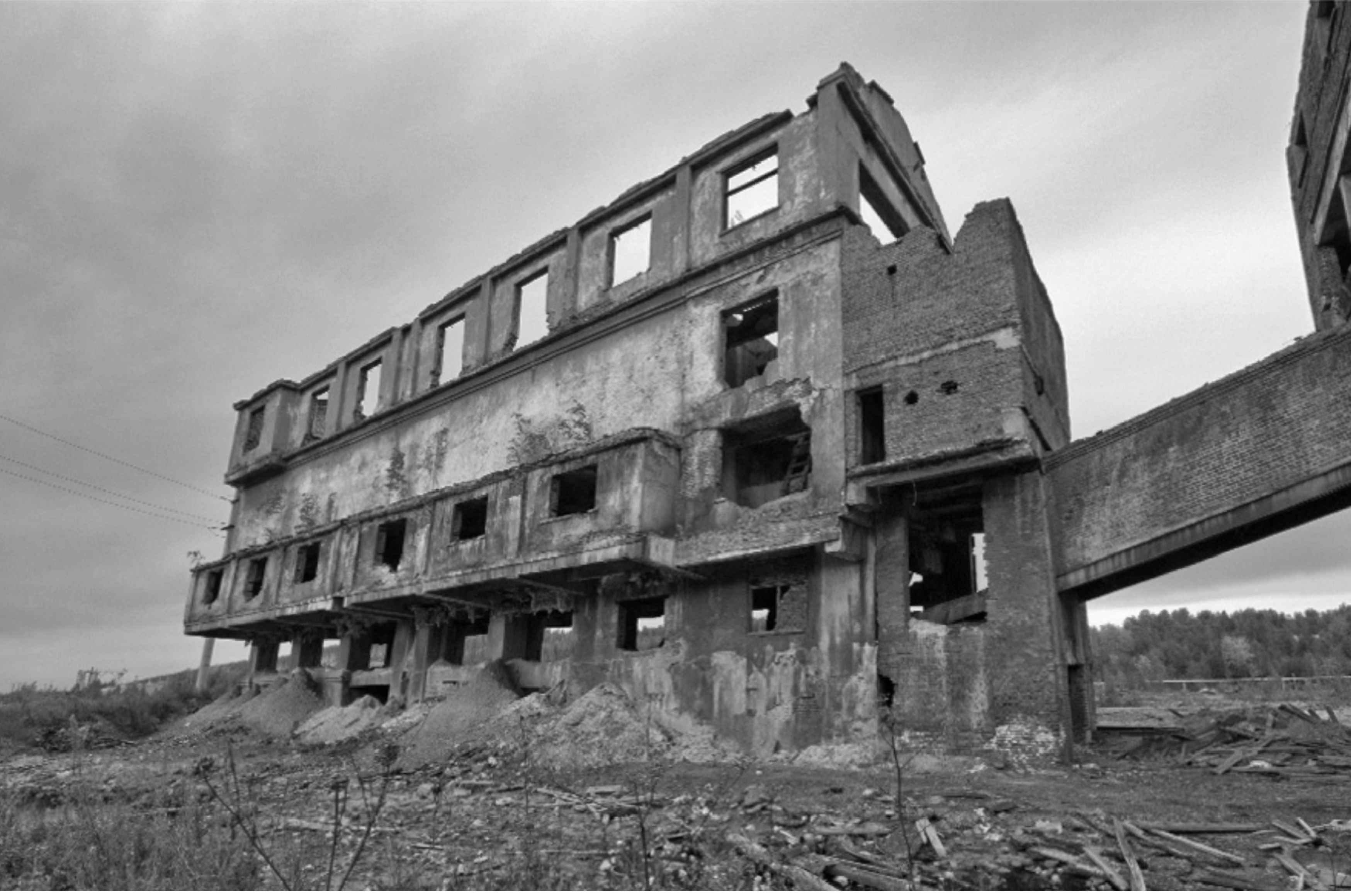 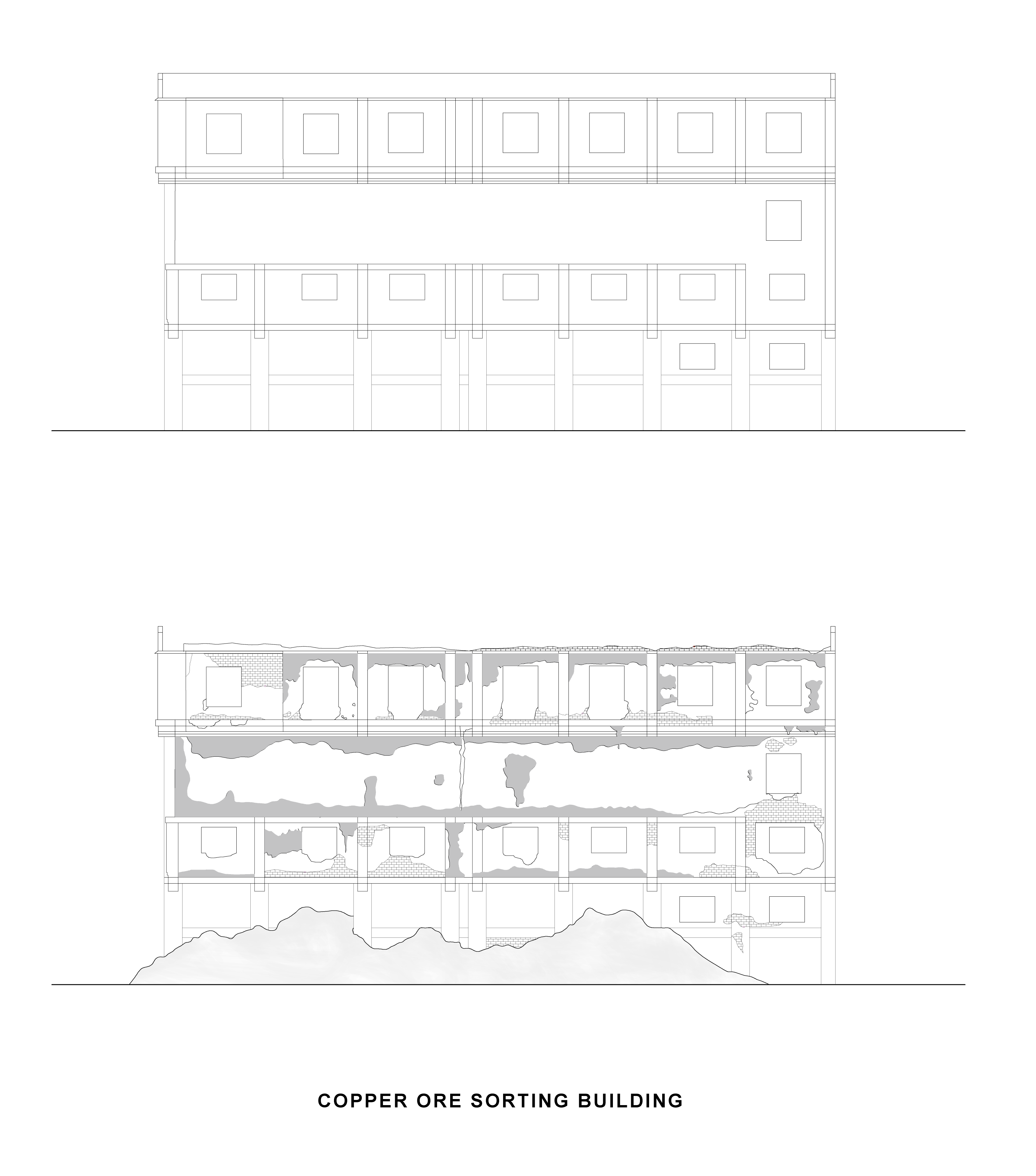 Process of erosion and material decay of the ore sorting building. From rigid to enthropic configuration 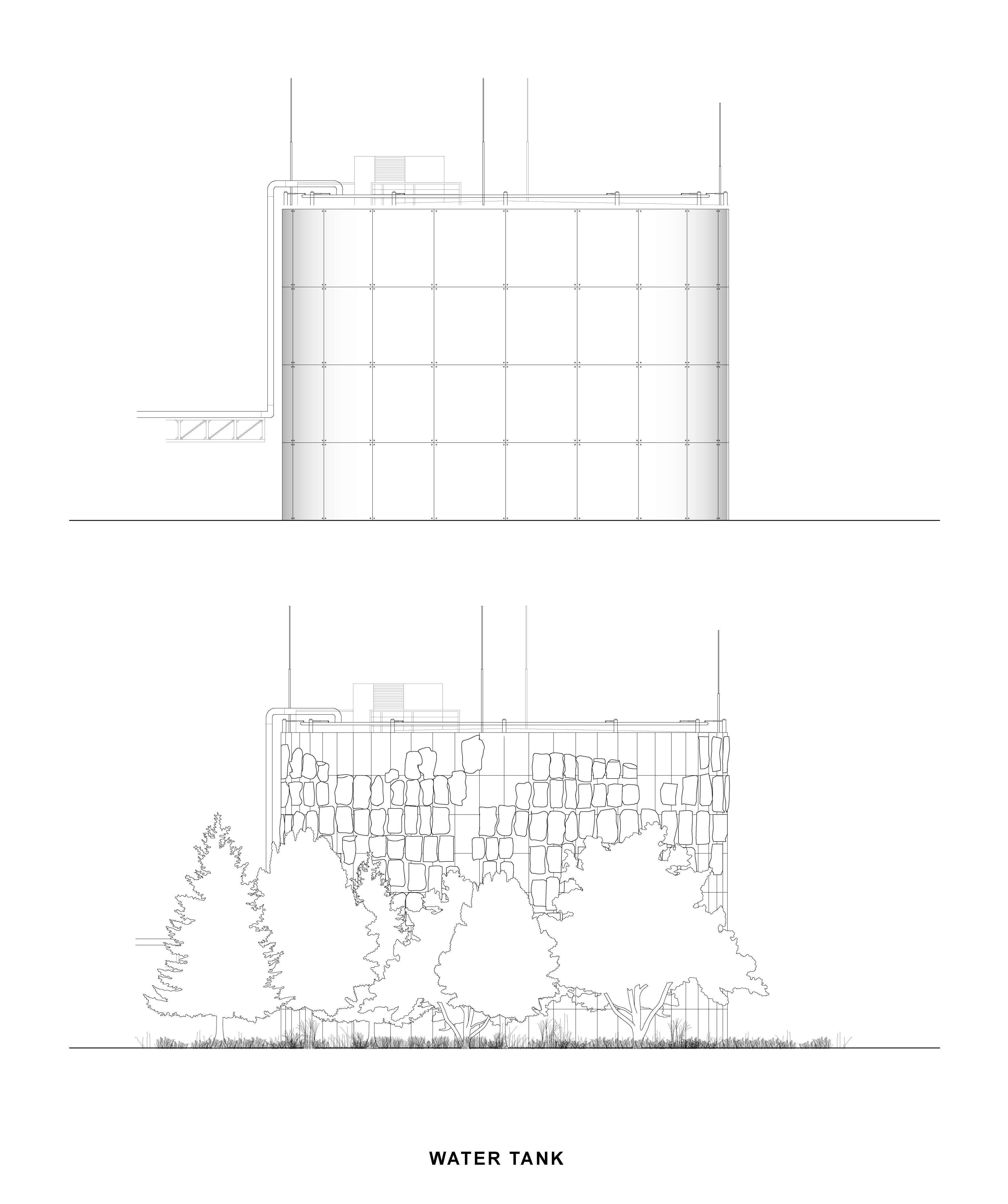 Process of erosion and material decay of water tanks. From rigid to enthropic configuration.
These drawings explain the original function and the way the buildings decayed, creating a landscape populated by out-of-place artifacts.

From this condition, an almost apophenic relation between the inner void and its surroundings has been created. The inhabitants of Degtjarsk interact with the danger zone, exploring it, giving it almost child-like attention. They touch materials, grab them, many decide to climb the waste heap. Some of them gather materials and store them in front of their Dachas (the name of Russian rural houses) in stacks. A preventive accounting for something in need of reparation.

This kind of curious and manipulative behavior became the very intention of this project. It redeems the beauty of failure as something worthwhile looking at and interacting with. It is already part of an alternative poiesis, a way of looking at this out-of-placeness with an absurd and detached gaze, one that is ready to forget about the appointed purpose and function of objects and spaces, but rather is ready to re-imagine and play with the possibilities that each situation discloses. 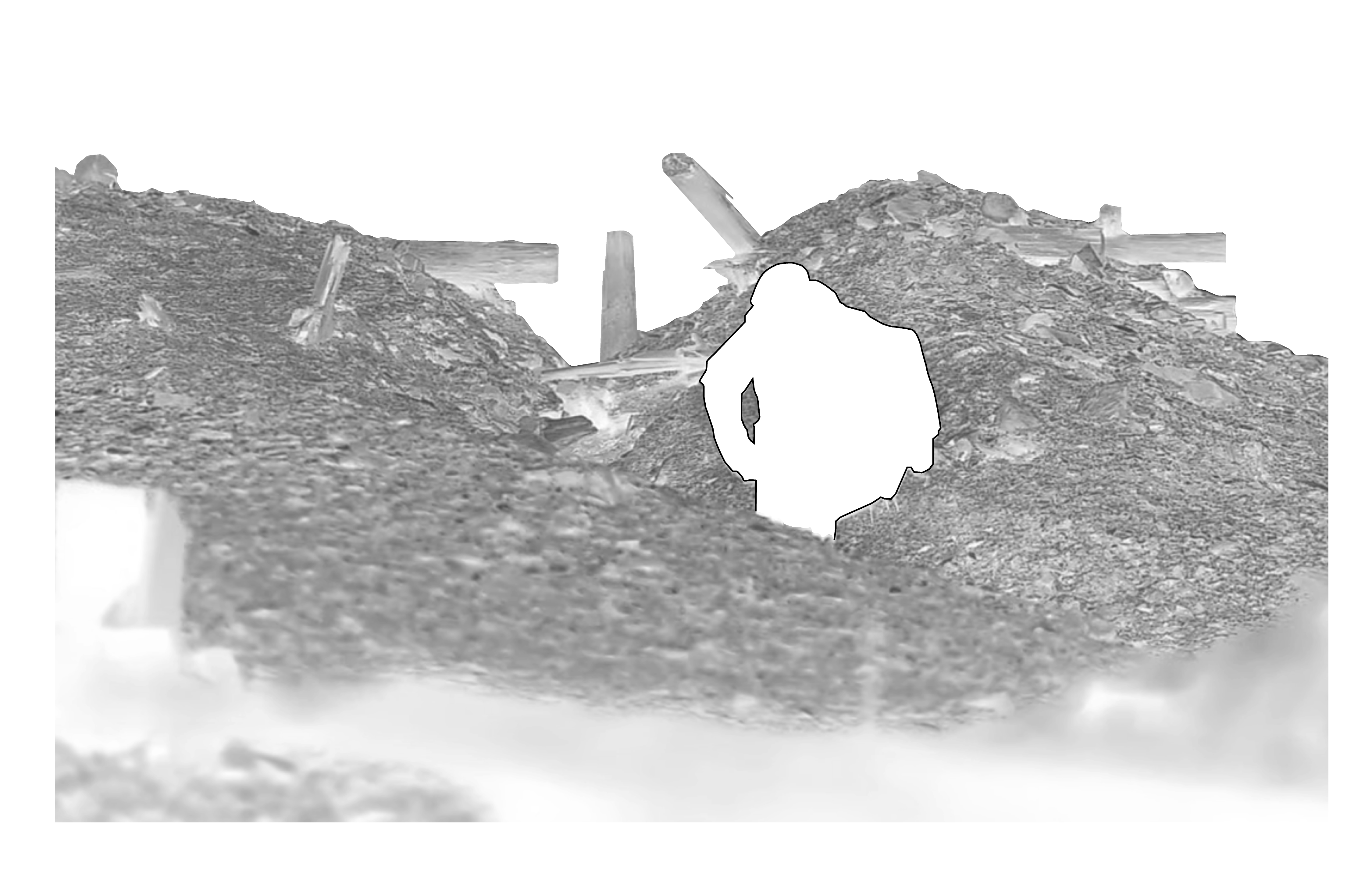 Graphical re-elaboration of urban situationism in Degtjarsk. A person is climbing and exploring the waste heap of Kapitalnaya nr2. 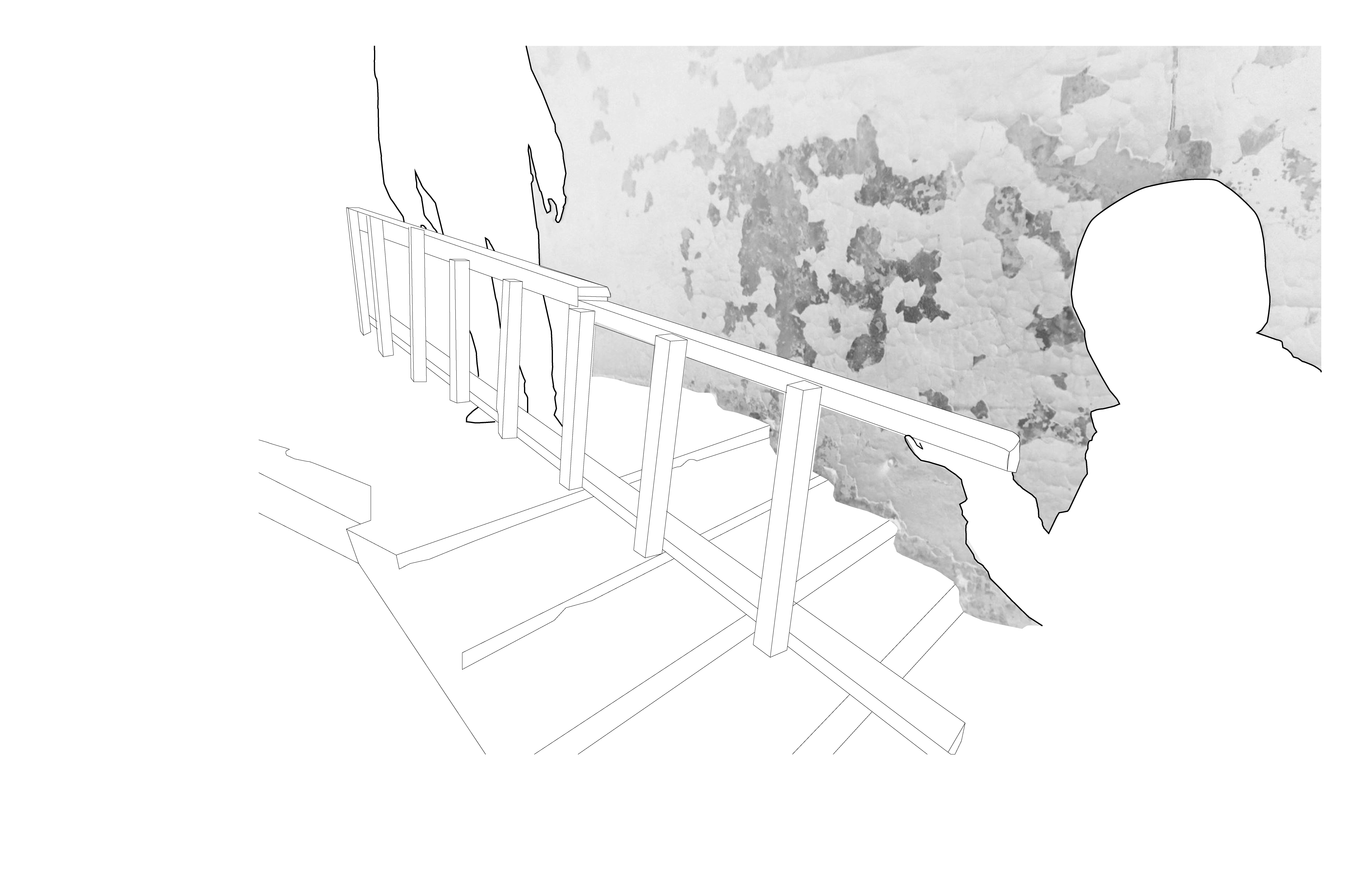 Graphical re-elaboration of urban situationism in Degtjarsk. People are grabbing and transporting an old ladder in the former ore sorting building.
Next: Design >