HEALING THROUGH A WOVEN LINE

The method of combining models allowed a design to evolve almost independent of site. As the principles of design were established, the building was later inserted back into the city of Bucharest. I chose to locate the proposal in a site that showed a combination of a hierarchically inserted, monumental grandeur and an everyday space, both relating to the city’s history and occurrence of voids (fig. 1).

One of the most significant voids created in Bucharest’s history is resultant from the dictator Nicolae Ceausescu’s rule. Under his regime, Bucharest’s landscape was radically altered. One third of the city centre was destroyed; houses, monasteries, civic buildings, lives uprooted, and the city’s landscape, infrastructure and built environment was essentially re-constructed (fig. 2). 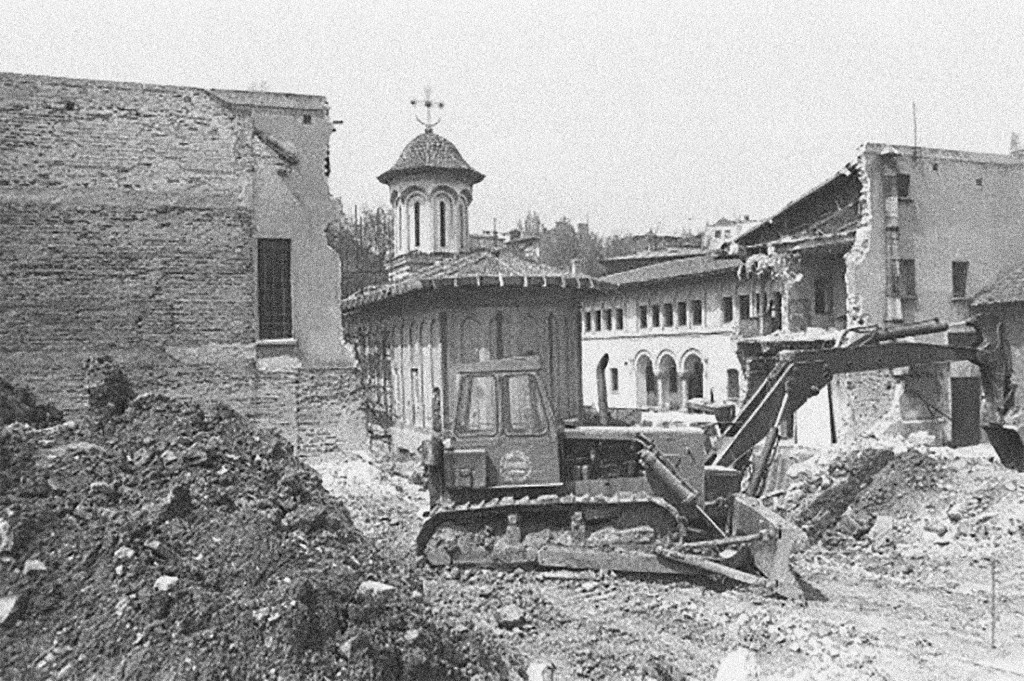 A major axis was imposed onto the city with the People’s Palace as the focal point of the city. This violent upheaval of city left a physical void; an empty space within the heart of Bucharest’s landscape (fig. 3). Over time these areas have slowly transformed into open ‘park’ space. It was at this point that the design theme of memory was initiated as an acknowledgement and response to the historical changes within the city. The proposal developed into a continually accumulating sequence of spaces as an institute of memory that could evolve and be built over a significant number of years, with multiple functions existing. The proposal tries to uncover the different understandings of the word memory through function and material.

In the masterplan (fig. 4), the building itself is approximately 600m in length and is located between the pre-1980s city and the zone of demolition as proposed by Ceausescu. The line starts as a connection with the disused community depot as a reference to the site of research and ends within the grounds of the palace.This positioning tries to bring a part of the city back into the zone of demolition as a process of healing. Several fragments of maps through different stages of the city’s history have been overlaid to indicate the site conditions of that time.

The line consists of a sequence of fragments that are positioned within the park, and responds to the old fabric of the city, in particular the road infrastructure which was less rigid and originated from the Ottoman Empire. The shaded area within the zone also indicated the areas of the terrain that were flattened. The areas that are left white show where the terrain that was raised in height used to be. The entire landscape around the palace was remodelled in order for the palace to sit on this new landscape. The building takes the original height of the hill as the datum of design to make reference to the old hill and extend across the new landscape. Originally the building was intended to be a straight line, almost like an archaeological cut through the city, but has later evolved into one that weaves itself through the existing context of the site.

The fragment that has been worked out in more detail looks at memory in a traditional sense and has the functions of a memorial wall, an archive and self-storage. The design builds on the first combined model with the grey parts being the archive and the folded parts being the self-storage and memorial wall. In order to interweave the three programs, each function was associated with a specific material and architectural feature (fig. 5).

The self-storage considers the technique of folding and thinness, which uses steel to represent these qualities. The memorial is about mass and inhabitation of memory within the wall and uses stone as the main building material. The archive is about the envelope or volume and uses timber as its material. The differences in material allows the occupant to be aware of the space that they are in and also the spaces that they are adjacent to as a means of orientation within the building. As the project is about memory, the different materials allowed for a consideration of how they would age and patina differently over time.

Next: The Excerpt in Detail >