In ‘Eclectic Atlases’, Boeri argues that by looking closely at a given urban environment, it is possible to draw conclusions about larger scale social behaviours. The role of the detective is to collect data, organise the information, draw relations and propose suspects. 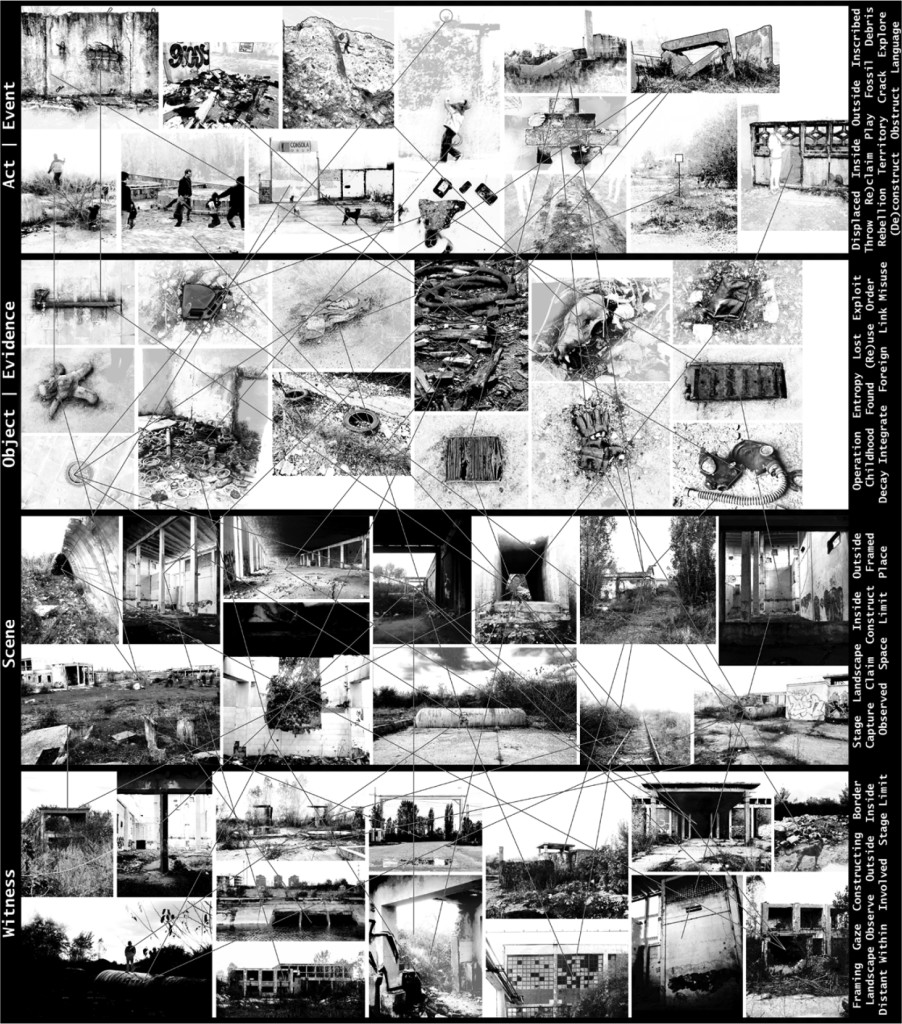 Following these steps, the photographs collected from the site were organised into the 4 categories; the act, the object, the witness and the event. Each photo in the separate categories could then begin to describe sub-labels and also form relations to photographs in other categories (fig. 2). 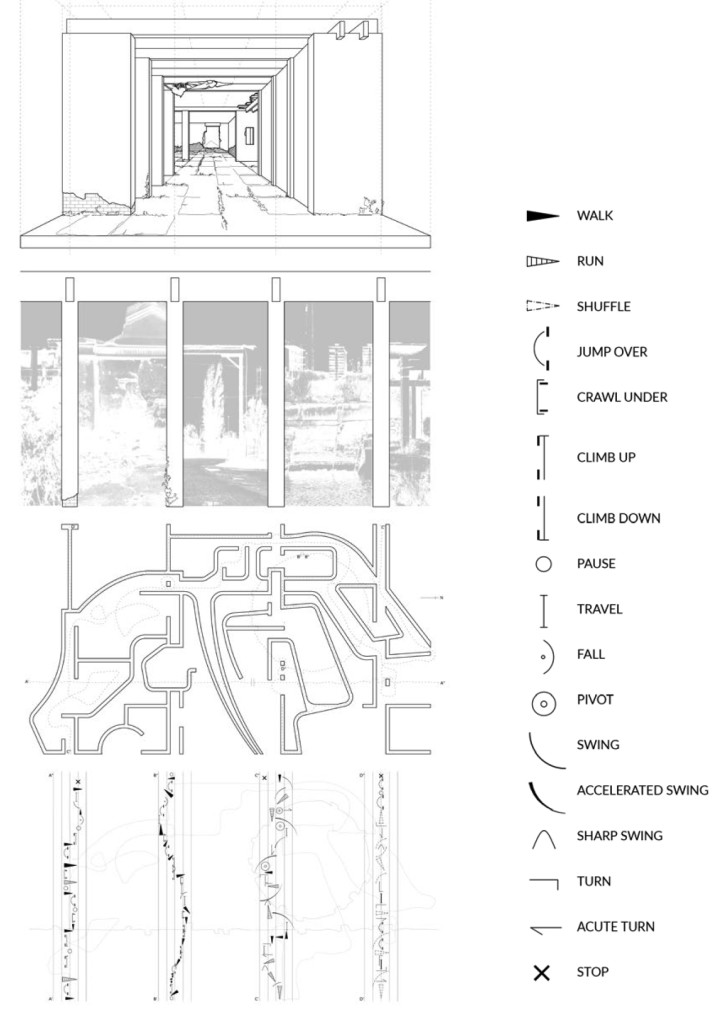 These descriptions could then inform or create an architectural space. Starting with the interior of a ‘box’ as a scene, the sides of the box representing the witness and the plan indicating an act. The tracing of 4 different movements through the space is represented through a series of notations, similar to Labanotation, a notation system that records and analyses human movement. The recording of 4 movements, i.e. linear, circular, between walls and on top of walls, show a subtle variation that respond to the space of the act and the elements of interaction (fig. 3). 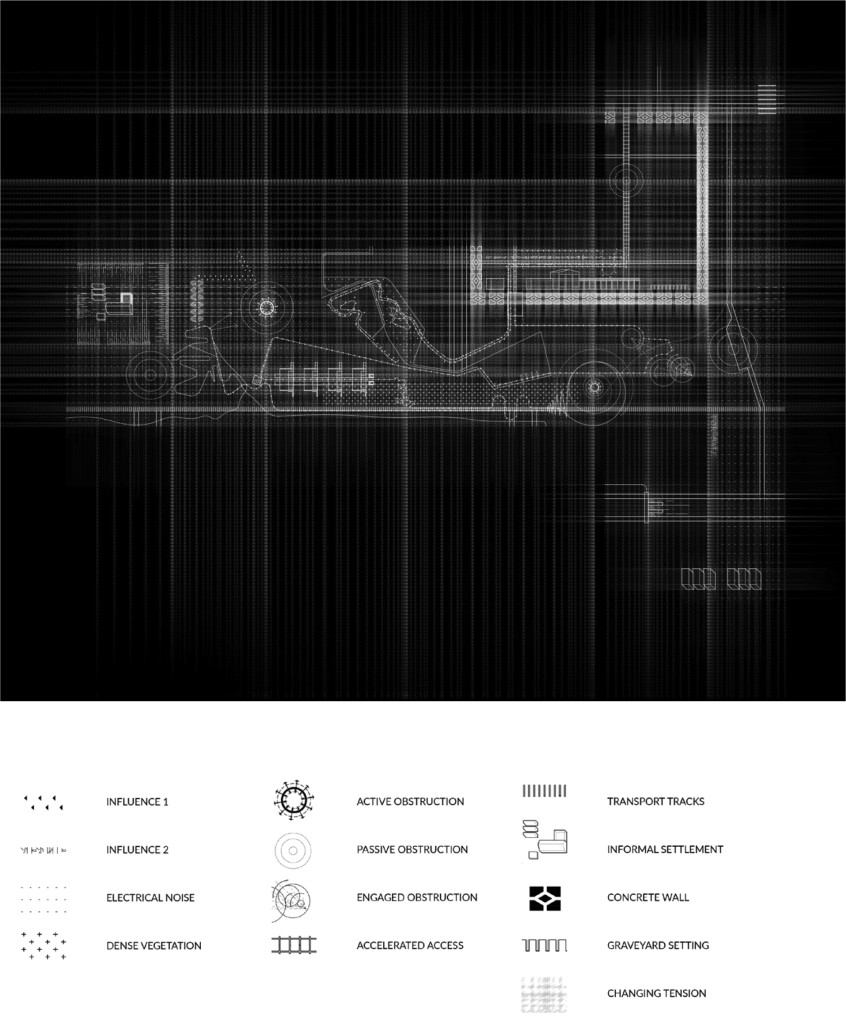 Fig. 4. Mapping of Gaze of Re-Adjustment.

The concepts of the dérive as defined by Guy Debord helped to consolidate the experiences that were encountered from visiting the site on day 02 and also informed the mapping technique for the gaze of re-adjustment. A small group walked the site during a 5-hour time period.  The walk occurred along the periphery of the space, back and forth, each time getting closer to the centre. During the walk, the group was guided by certain influences (such as a young boy and a stray dog). Before setting out on the walk, the group established certain rules such as avoiding obstructions that would lead to the immediate removal from the site. The aim was therefore to stay as long as one could without getting detected. The group also avoided situations such as interactions with police, security guards and other site workers. Features in the landscape such as the river, informal settlement and monumental ruins became inducements that the group was drawn towards.

A mapping developed that indicated a constructed geographical landscape of influences, obstructions, movements and atmospheric qualities (fig. 4). What became apparent through the mapping and re-ordering of instances that occurred was the feeling of tension and the almost surreal quality of the walked experience. A field of tension emerged that highlighted these moments of suspense and heightened the awareness of space. 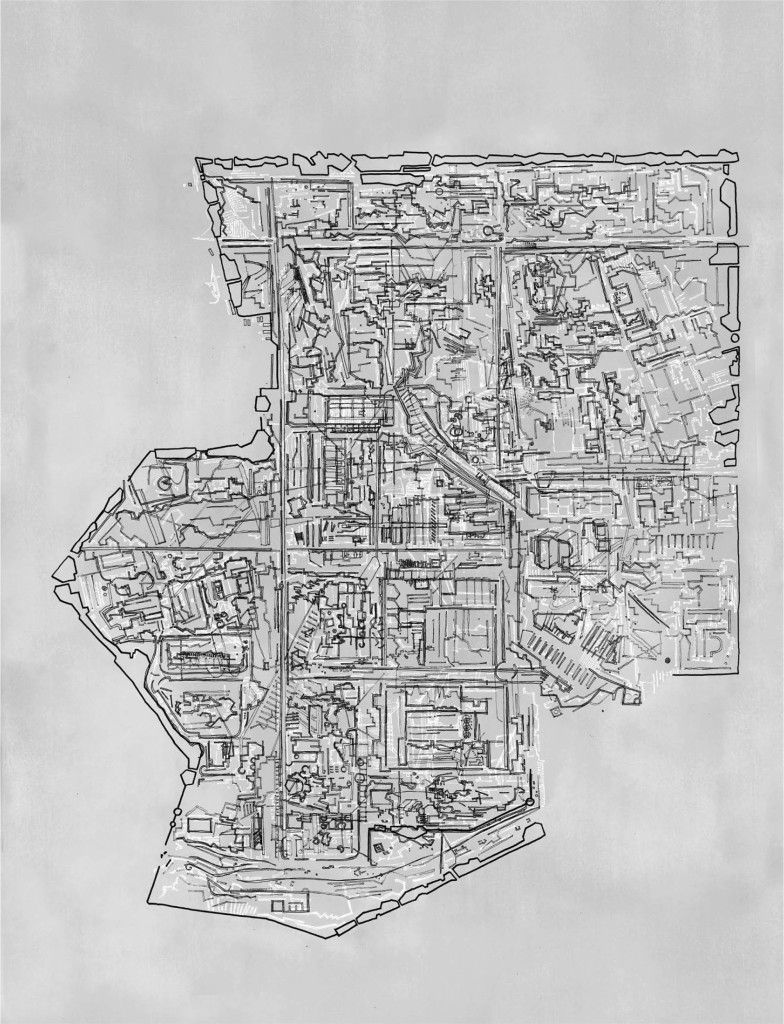 Fig. 5. Layering of multiple hand drawings, interpreting the site as a labyrinth.

The model of the labyrinth and the maze offered a projected reality of the site before visiting Bucharest. It allowed for a spatial understanding from above, similar to standing on the platform of the labyrinth, giving an objective view of the overall system but lacking the bodily engagement of being within. Following the site visit and collection of data, the rich qualities of the space could be incorporated into the drawing.

The mapping therefore starts to layer different understandings of the space, but using the same notion of walls that appear in the labyrinth. The first layer traces boundaries of space drawn in black ink. The second builds on the first, re-tracing boundaries but also introducing elements within the space such as the ruins. The third layer, drawn in white, enhances this conflict between within and without. The final layer replaces the pen with the knife to introduce cuts within the landscape and tracing of seams within the site’s fabric.

The process of layering the 4 techniques of drawing adds a certain depth to the space and allows for multiple readings and mis-readings of the space. 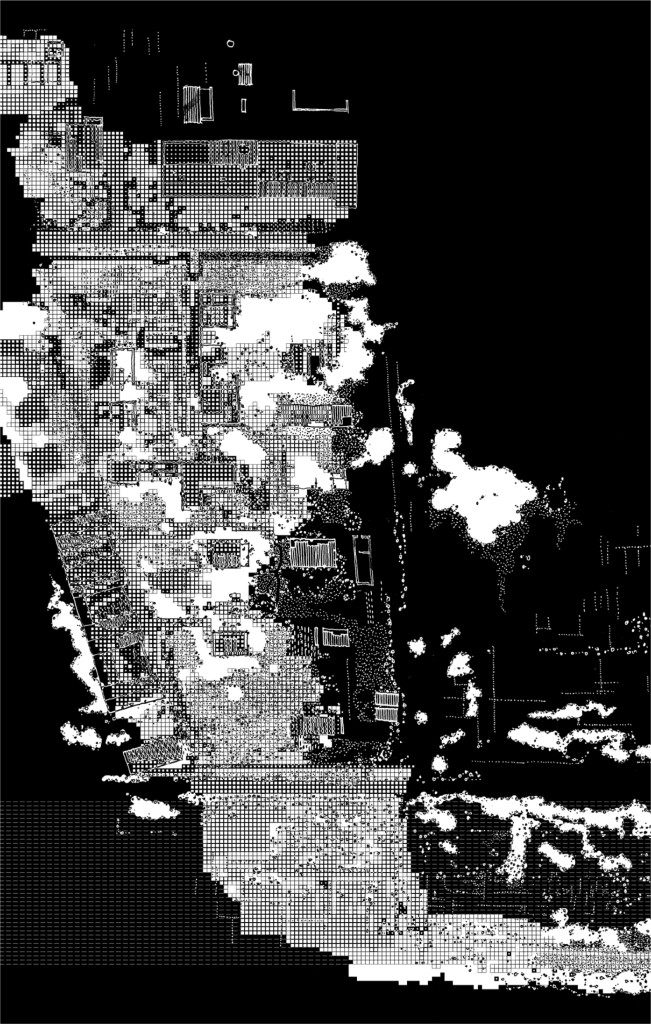 Fig. 6. Categorised documentation of ruined stages from a fragment of the site.

Upon entering the site, Chimopar appears as a collection of built forms in ruin. The old factory buildings are in various stages of decay and show an almost deliberate removal of architectural elements such as the roof, window, doors, lintels, in a manner that is carefully composed. The ruin captures the suspension of time between life and death in a single object. The industrial landscape also has a strong relation to nature and its power in reclaiming space. The balance of order versus disorder, nature and man, built and un-built are themes that have been developed in the ruin’s gaze.

The mapping takes the part of the site in which both ruin and nature are most expressive (fig. 6). The space is gridded according to 6 stages of decay; the 7th stage defines nature as a pure element. By layering a hand-drawn sketch of the site over the mechanical and precisely gridded site, the conflict between man-made and nature becomes strikingly apparent (fig. 7). This method of the mapping also focuses around an ordered system in comparison to a less or un-ordered system. 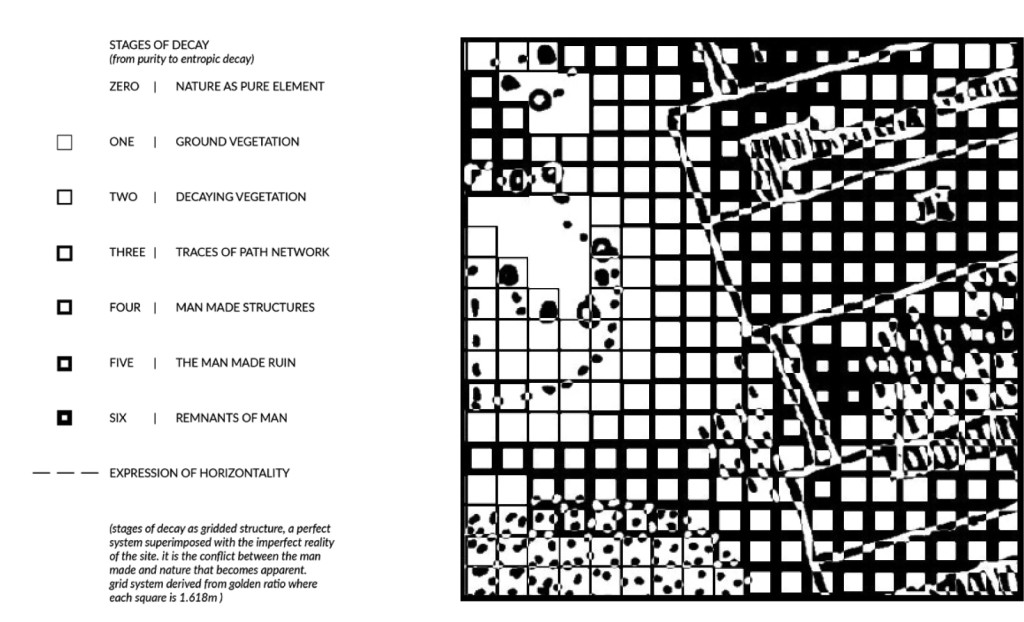 Play. A game constructed in a fabricated world. A new space, new rules and new meaning.

Three children played on the site, each of different age and height, of different personalities. They made a game of throwing objects. Each throw uncovered a new, non-physical boundary (fig. 8). As they moved across the landscape they engaged differently with the space and elements in the landscape such as walls, platforms, buildings and trees. Each child offering a different interpretation of the space and expression of movement; slow, animated, exaggerated. The mapping documents their movements and begins to re-describe their environment through their actions within the space (fig. 9). 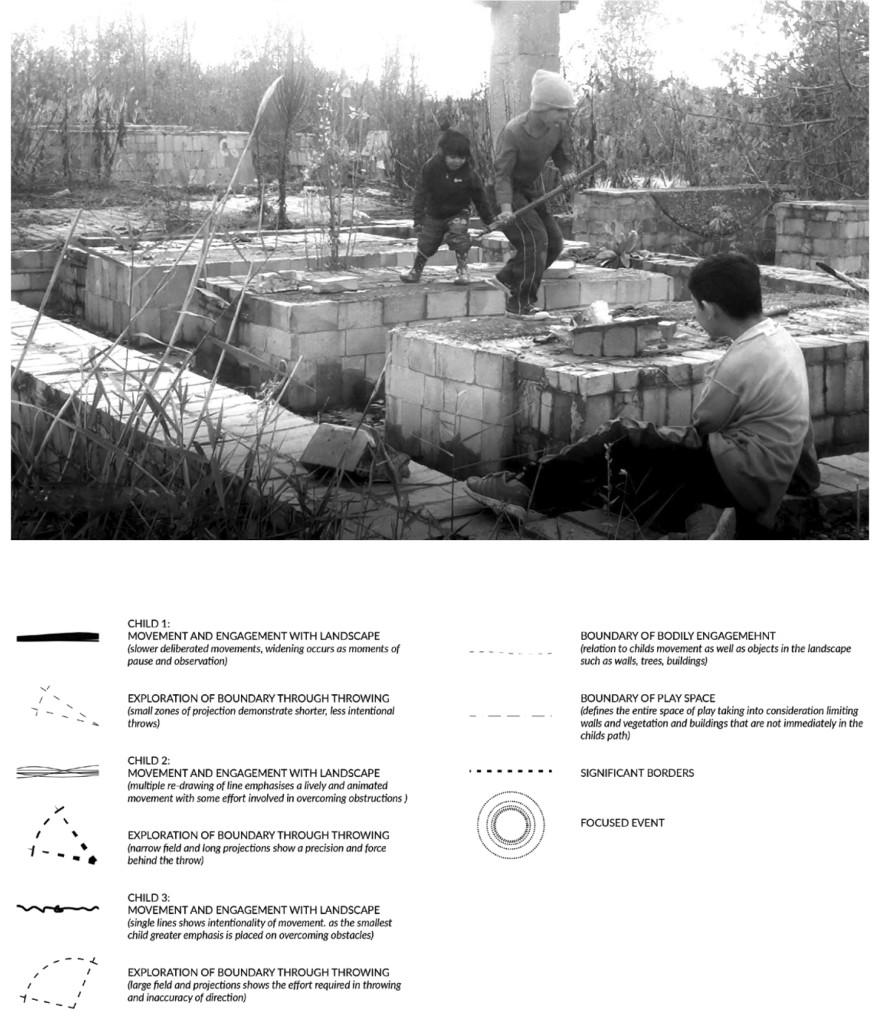 Fig. 8. Photograph of children jumping across piers as they engage and explore the space as a playground. 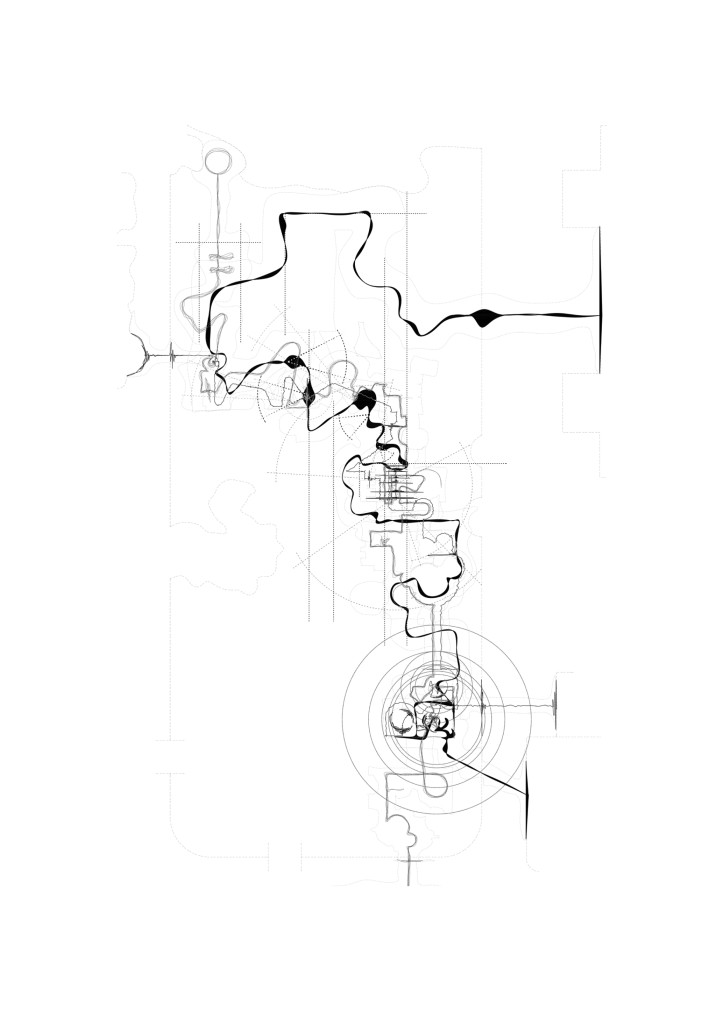 Fig. 9. Spatial interpretation of children playing on the site.