In the mythology of objects as the synthesis of a rational and rationalizing ideology a crack opens. A deep and inevitable crack that lets out the products of such a will to power.

It tells us about what we left behind, in the attempt to be modern.

The idea of unity, purity, balance, and control, together with the irreducible positive and progressive connotation of the future loses our attention and leaves room for the unexpected content of this fracture. A terrible but fascinating discontinuity. They leave room for a precarious and vulnerable condition, decentralized and therefore out of control, in which a background noise constantly reminds us that something has gone wrong, that “the future never arrives”.[1] 1 - Pepperell, G. The Post-Human Condition. Portland: Intellect Books, 1995.

Don’t panic however, a shattered crystal undeniably possesses its own aesthetic and charm and produces many smaller pieces, each with its own distinct identity.

It is precisely on identity the lesson that we shall learn and absorb from the failure of an empire because it tells us who we are if we can grasp the waste products that this demolition has as an effect and appreciate them in their singularity.

The making explicit of the emptiness that this shattering produces informs us on how the parts of a whole were always there, distinct and discreet, as they appear before us when there is an abyss separating them.

Let us suppose that I am standing in a field in the middle of nowhere. Well, not really, I am standing in a field in the countryside around Degtjarsk, near Yekaterinburg, in Russia. I see nothing but grass, trees, birds, and so on. Nonetheless, in the distance, I can glimpse some buildings, a chimney, a power line. Is this enough to compromise the ‘purity’ of the natural environment around me? When the progressive civilization of the world is achieved; its territory has virtually reached a condition in which the relation between man-made artifacts and natural environments have merged and the border between the usual humanist distinction between these two cannot be clearly stated.[2] 2 - Pepperell, G. The Post-Human Condition. Portland: Intellect Books, 1995. This condition consists of a new ecology, a synthetic and continuous entity.

The fact of seeing some kind of artifact virtually everywhere in the distance necessarily shifts the attention from the meaning of something ‘in itself’, i.e. the grass field ‘in itself’, the power line ‘in itself’, to the relational space between them, that we can establish as meaningful.

This conceptualization of space emerges from the need to overstep the very dichotomy between object and subject put in place by their homogenization. Instead, an ontogenetical correlationism emerges from this condition which sees intra-dependent entities that only exist in relation to each other.[3] 3 - Kousoulas, S. “Urban Correlationism: A Matter of Access.” Abstract from Deleuze + Art: Multiplicities | Thresholds | Potentialities Conference. Dublin, Ireland, 2016. What is then referred to as the technogenesis of Degtjarsk is precisely the emergence of an alternative condition arising from the spatial outcome of a technologically progressive idea of “civilization” that was, on the other hand, oriented in the opposite sense. Object-subject relations in a state of inter-dependencies, “distinct beings in an antagonistic relationship with their surrounding”.[4] 4 - Pepperell, G. The Post-Human Condition. Portland: Intellect Books, 1995..

This research and design project focuses on the territorial condition of Post-Soviet Siberian Russia as a valuable case study for the proposition of a socio-political-spatial alternative to current teleologies of spatial production and systematic implementation of the territory. This intention is driven by the evident and more urgent than ever need to investigate an alternative trajectory to the current proposition, values and methods that we are following currently.

The logic of exploitation and consumption of resources based on a positivistic premise of growth fueled by technological and scientific will to power is proving to be self-destructive. According to the same means that produce it -statistical predictions and calculations, inform us on the dangers we face in the age of global climatic crisis- this techno-economic mentality is capable of confronting humans with the experience of, so far hypothetical but relentlessly and dreadfully more literal extinction.

The premise of this project is therefore a rhetorical and deliberate jump towards the preventive acceptance of failure. Failure defined as the revelation that a collective direction of intentions is coinciding ruinously with its opposite finality. Failure as the neglect or omission of expected and required actions: our failure, a crack in the powerful promise for a better future, the dismantling of progressive rhetorics of novelty and modern heroic narratives.

For this reason, nothing offers better materialization of this failure than Degtjarsk, which brings us back to why, where, and how this higher dimension of intentions can be investigated here. This town is now composed of a rusty infrastructural sprawl and coincides with the premature territorial representation of the unbearable and unsustainable counter-finalities of the logic of exploitation and control that is the spatial translation of that same techno-economic progressive mentality. 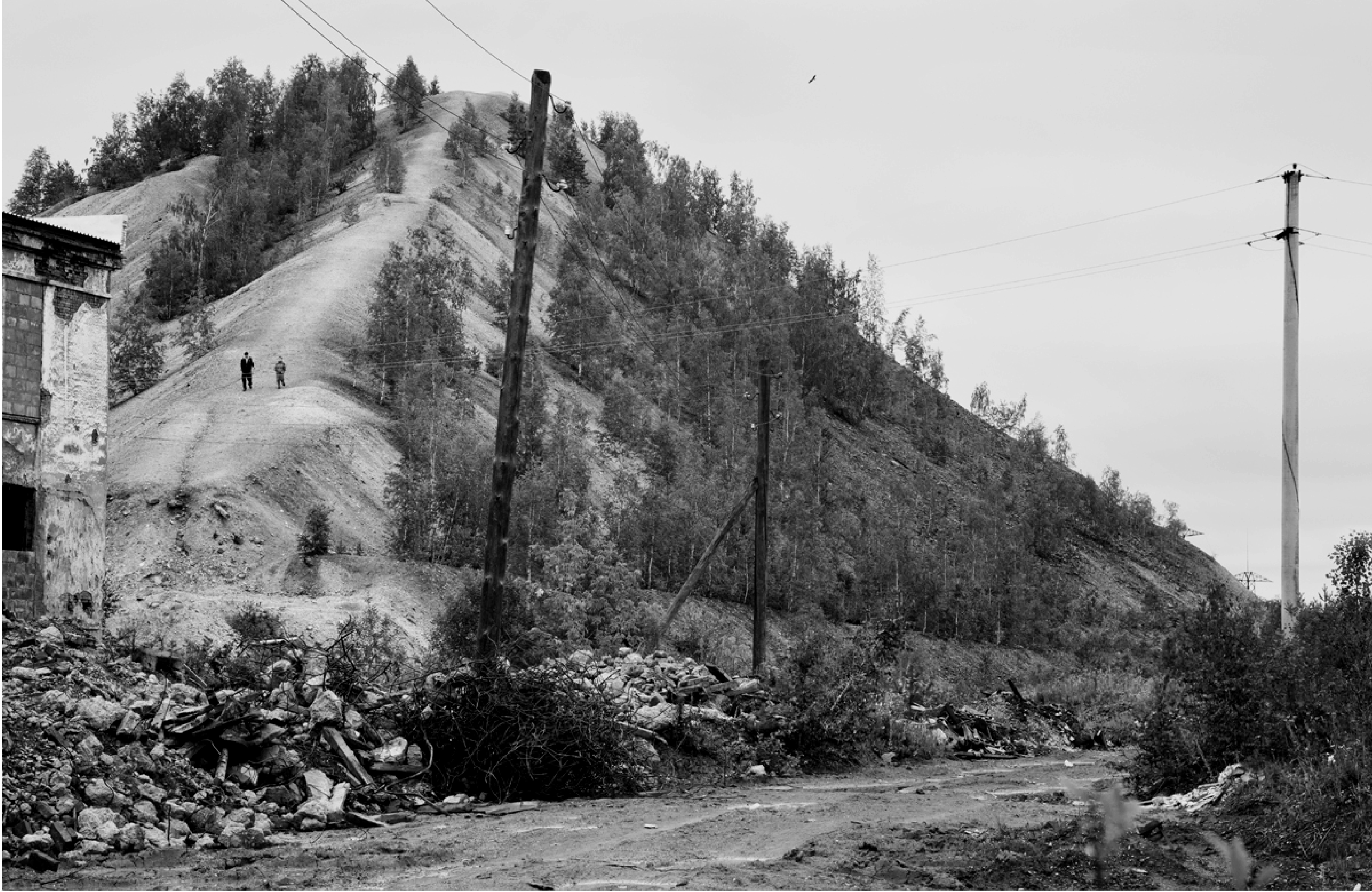 Waste heap in Degtjarsk resulting from the accumulation of copper ore sorting activities.

The first settlers of Degtjarsk were coal burners who burned charcoal for the blast furnaces of the Revda iron-making plants. This area then started to be populated by miners of iron ore around mount Labaz. With the deepening of the works, the largest deposit of copper in the world was found and several mines started to open, creating a ‘spine’ of mining, in different spatial forms (open pit, underground, workshops for processing) that cut the city in half and lay on the west side of the mount Labaz. Huge mining facilities were pumping copper out of the ground and the city revolved around this activity and the idea of producing and progressing, thanks to technological advancement.

The monothematic implementation of industrialization in the formation of spatial meaning in Degtjarsk constituted the normative agent in the production of space.

Now that the world has ended, and the mines are exhausted, the self-fulfilling agency of technology-made-intention emerges in its purposelessness. Toxicity levels are off the charts and space and waste have almost come to coincide in Degtjarsk, a pilot example that teaches us that when everything we seek is to consume, extract, and produce, there will be a point where we will be surrounded by garbage.

This brings us back finally to our grass field and the chimney. Because the intention here is to deal with the consequences, with what comes after the revelation that the social project we had is not working out. The starting point of this project is therefore the neutral understanding of the alternative properties that such a radical condition of space produces and to look for an alternative, originating from the conditions created by our very mistakes.

The technogenesis of Degtjarsk is then the collateral, unexpected, and counter-qualitative product of failure. The creation of an alternative condition. A relational continuum that can be the starting point for the elaboration of qualities and methodologies for spatial production capable of dealing with what is effectively a post-catastrophic scenario.

Next: What comes after the hero?? >